Deepavali (meaning, Array of Lights) , the festival of lights, is nearly here...today is Wednesday and it falls on Saturday. The preparations are beginning, though...and since I got out my brass lamps and cleaned and polished them, (using tamarind -- and soap powder) I thought I would share my  "vilakku"s (viLakku)  with all of you.... 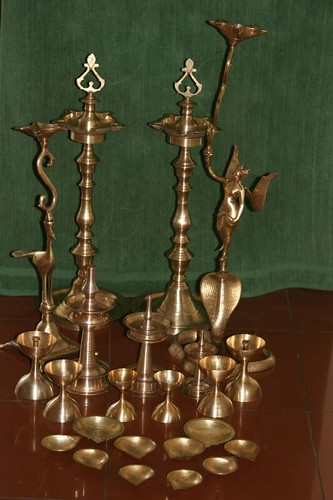 The two tall lamps at the rear, and  in the centre, are called "kutthu vilakku" ...the traditional symbols of lighting up homes all over south India. "Kutthu" means "upright", so you get the idea! They come in two or three sections, the base, the stem, and the place where the oil is poured and the wicks lit; there are spaces for five wicks, and the little flat pieces at the top can face any way but south...lamps  are placed  facing that way only at a death. I don't know why this is so.

In the middle are three lamps that look similar, in Goldilocks sizes...Father, Mother and Baby! This type of lamp is called the Guruvayur (guruvAyoor viLakku) lamps...they are native to Kerala, though now used everywhere. I won each of those in music competitions when I was young!

Then come 6 lamps in 3 sizes, looking like hourglasses. These are called "Jyothi"s..(jyOthi)....they have a central hollow column through which the wick passes, and is held up vertically. These lamps can burn steadily for a long time as the wick remains soaked in oil at one end and steadily out of it at the burning end.

And right in front are, again in 3 sizes, flat  lamps with rounded bases,  that are traditionally set on the mud floor, which supports the rounded base that takes the oil. These are called "Ahal" (ahal) viLakku.

At the two sides of the rear row are two somewhat weird lamps given to me during my wedding. One has a peacock bearing a curlicue and a five-wick-ed lamp on top, which is OK...but the other one never fails to set me laughing. A cobra, bearing a westernized (topless!) angel on its back, and the angel is holding much in the manner of the Winged Victory at Thrace , a lamp...both of them not very straight, either! I do love my peculiar lamps as much as I love the traditional ones. No, they are not from Pisa, though they lean so!

By the way... my full name means, Goddess of Wealth Who Holds A Lamp...I was given this name because I was born a day before Deepavali; my Hindu " birth star" always falls the day before the festival!...and my "English birthday" as they call the date of birth according to the Gregorian calendar? I share that with

udhay. I will be 52 and in all these years, have found only one person prior to this, known to me, who shares my birthday....so it was funny when I was chatting to Udhay and asked him for his birthday and heard the answer.