Over the years, I have tried to learn many things...in some things I have got farther than others....but always, always, I find that when one is beginning to learn about something, there will be someone to whom the complex difficulties that you face don't exist, and to whom "it is all so simple".

Of all the subjects I learnt at school, mathematics was my most hated...a combination of bad teachers and a natural disability with manipulating numbers made for this situation. So of course I am married to a human computing machine, whose idea of relaxation is to compute how much of Bangalore would be covered if the Himalayan mountain he saw before him were excavated and spread over our city (I am not kidding, he did do the calculation and the answer was that Bangalore elevation would rise by 3 ft!) or what the costs of setting up a dosa joint in New York would be. He looks at me in surprise when I can't figure out how much 375 gms of something would cost at so much a kilo...and says, "but it's so simple!"

I was learning to sing really fast and my voice wouldn't co operate, when a singer who visited us said, "but it's so simple!" I will be catty and assume he was born with a voice meant for appreggios...

I tried to sketch and was told that perspective was simple..I still don't find it so.

I have learnt to embroider, to knit, and to make those incredibly complex mathematical kolams that women decorate their doorsteps with...none of it came simply to me. Making kolams with dripping rice paste and a piece of cloth is NOT simple, especially if you cannot make a single mistake while drawing the complex twists and turns around the dots on the kolam!

I gave up coding in the days of BASIC, only to be told nowadays by youngsters less than half my age that the extremely complex coding they do is...well..you guessed it.

I started making garments for my child on my sewing machine and wound up with indescribable, laugh-provoking weird-looking dresses...my expert mother in law said.....(add refrain here.)

I started cooking regularly and my phulkas would look like the map of Africa;my "kozhakattai" (modaks) would become a jammy mush....and both my mother and mother in law said.....

I have learnt to swim, to cycle, to drive a car, and especially swimming took three attempts because of my intense fear of the water, after a near-drowning in my childhood. I finally learnt when five of us, all equally afraid, learnt together!

When I got really interested in wildlife, I found it so difficult to even spot animals in the undergrowth when the guide would say, "two gaur on your left" while negotiating the jeep over a particularly bad stretch.

I was, just now, amazed by someone who saw a loom in a museum in Stockholm, and decided to build his own. I cannot even begin to imagine how I would do this. I told him this, and the reply was.....

The only exception to this rule has been birdwatching...no one has told me it's simple, they have told me that they all started out like me, unable to spot a bird, or to identify it if I did... and slowly evolved into better birders.

I now want to learn how to upload photos on the Net and post pictures to LJ...and I know that when my friends come to help me, they are going to remark....

No, I don't find everything simple. Learning is fun, and to me it is the essence of living...but NOT simple. Learning something well involves, to me, a lot of hard work and application. It might be cryptic crosswords or Sudoku,it might be a new board game that I learn in the US, it might be operating a new gadget or software...I need time, effort, and sometimes, a good teacher, to learn well.

So *I* am careful, when someone compliments me on something I do well, over a long period of time ( I spent more than 15 years learning singing for example)...NOT to say, "it's so simple". I smile, thank them, and say, "With a lot of practice,it will come." I know that what is simple to me now has only become so, and may not be simple to someone else.

sitting in front of the keyboard,
overflow of feelings normally contained and stored

trying to type love and longing into cold, clinical keys
no way of writing and getting heart's ease....

no yahoo messenger heart emoticon....
thinking about a daughter long grown up and gone....

whispers in my mind...scenes of a young family, laughter..
a smile on my lips at the memory..and an unbidden tear after.....

Tour operators in Rajasthan offering luxury holiday in Rajasthan.
(Anonymous)
2006-05-30 11:57 am UTC (from 203.101.5.223) (link) DeleteFreezeScreen Select
Rajasthan is often projected as a land where forts and palaces are a dime a dozen. Rajasthan’s forts and palaces can be found anywhere and everywhere - on hilltops, in dense forests, over the ridge, in the middle of lakes and even in the midstream of a river (the Gagron Fort)!
Now you know you are missing such a beautiful place, make a visit to Rajasthan with us.
For furthur guidance visit our web site http://www.rajasthandiary.com. We are happy to solve any enquiries asked by you

How do I avoid being spammed like this on LJ? 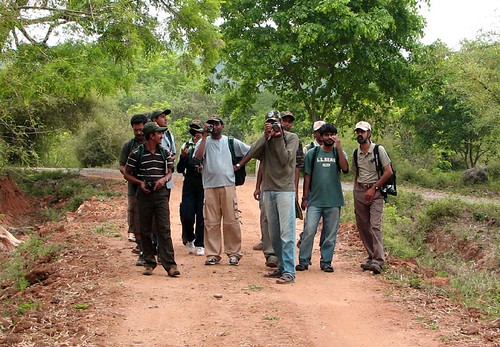 sainath very patiently walked me through the whole process of posting photos on LJ. Much thankings to him. Here's a pic of the Naturalists' Training Programme Group in March 2006! 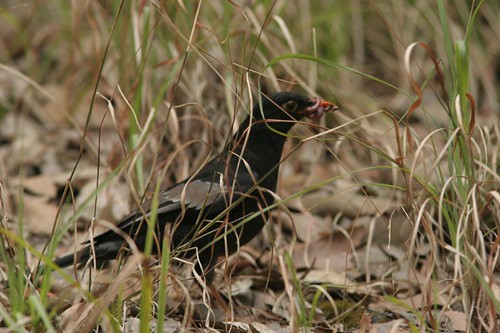 I am always amazed at the helpfulness of today's youngsters...I only hope we were as nice to OUR elders as this new generation is to us.

sainath saw my post on learning and has just spent over an hour on the phone, walking me through the process of uploading pics to Flickr and posting pics on LJ.

Thank you so much,

I hope you get the course of your choice, and I hope I get to boast, in a few years' time, about knowing you as a young man!

amoghavarsha taught me how to make userpics on LJ...I can't forget that, either...


For them, I suppose, it's all so simple!

The photographs of the Uttaranchal trip that I will be posting are all taken by my husband...

He and I make a very funny team. He can't spot the birds and I can't take the photos...so we need each other! All the other guests were greatly entertained by the sight of us in Uttaranchal, shrieking (in suppressed voices of course, for fear of scaring the birds) "Look at that!"(me); "Wait! Let me get there!" (him); "Did you get that?" (me); "The #$^* bird flew away!" (him)...and scrambling from place to place! 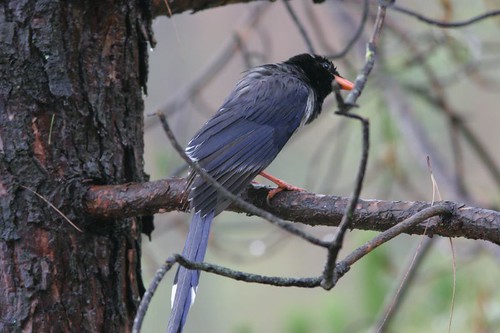 This beautiful, ornate bird, with a long tail that feathers out in black, white,and grey-blue, was caught in the rain and waslooking quite huddled and miserable! There were four or five of them dancing on the conifers outside our cottage at Munsiyari in the mornings and the evenings...quite an entertainment! 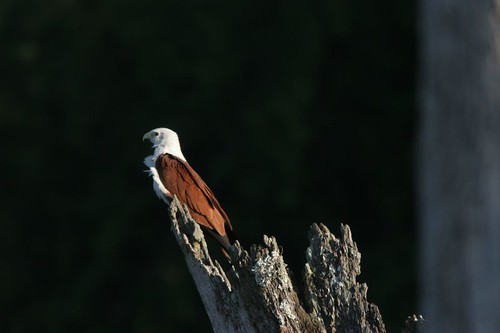 This majestic bird was presumably looking out for prey on the river. 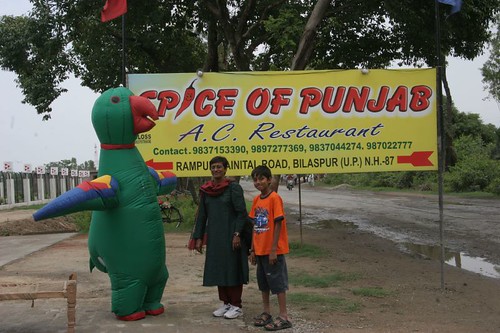 A perfect way to end a birding trip...a never-before sighting of the Pseudopsitta punjabspicis. I have given the name with some inputs from Amogh and Sudhir. How many birders can claim to have found a new species within 3 months of taking up birding?