I decided to snap a couple of other things at the wedding we attended recently, on Aug 27th....will be posting them....

swatisani tells me it is the dhOlak.) It is a long, thin wind instrument, with a body made of "aacha" hardwood, and a flaring metal bell, with stop-holes along its length, and has a number of mouth-pieces that the players alternate. It requires tremendous lung power to play..the cheeks of the players puff out and you can see the effort....hence many nAgaswaram players are husky men! There ARE a couple of women players, but it's not common...

The thavil is a two-sided percussion instrument, made of jackfruit wood, and leather stretched over both sides. It's played with a stick on one hand,  and on the other side, the hand that plays has its fingers protected by special caps. The thavil has a typical staccato sound...the nAgaswaram and thavil are considered auspicious instruments and most large temples have a team of players attached to their administration. There are normally two nAgaswaram players and two thavil players, with a young learner playing the "sruthi box" or pitch drone instrument, and keeping the beat and count with his fingers.  (He is also generally the hey-you of the team!)

After they have played on all the requisite occasions at the weddings (at important junctures, the thavil players alone play hard and loud, which is called "getti mELam"...to draw the audience's attention to the rite going on) they are honoured and paid by the (who else?) bride's father, and feasted and sent on their way...to the next engagement! It is difficult for nAgaswaram players to make ends meet,even if they are attached to a temple. 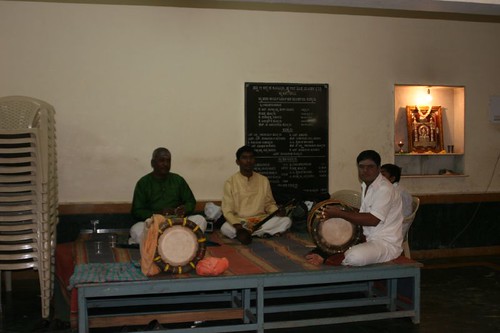 In this picture, the players put down their nAgaswaram thinking they were posing...I kept requesting them to play but they politely waited for me to finish clicking! One player has the nAgaswaram acoss his lap.  The young "katthukkutti" (the learner) who plays the pitch and keeps the beat is sitting on the chair behind the dais. One thavil player has gone somewhere; the caps on the other player's fingers can be seen. Traditionally, the players would be wearing "veshtis" and just an upper body cloth...it is a recent trend to wear kurtas, shirts or khadi (homespun) tops. They normally wear rings on all their fingers so that the gold and stones can glitter as they play, and used to wear thick gold chains on their muscular chests. When someone wears too many rings, s/he is ridiculed, "why are you looking like a nAyanakkAran?" (nAyanam is a Tamizh synonym for nAgaswaram.) So, if a Tambram uncle complains of today's pop idols with flashy jewellery...remind him about these players!

On the right hand side is a niche with a silver embossed icon of Ganesha, with a lamp lit near it. Chairs meant for seating the guests at the wedding are stacked on the left hand side.


Though Carnatic music is thought of as a preserve of the Brahmin caste, this is really not so...almost all nAgaswaram players belong to the "Pillai" community and in the villages, everyone flocks to hear their recitals.Recently, instruments like the clarinet or the saxophone have also been successfully used.

Students of Carnatic vocal music are traditonally told to listen to a lot of nAgaswaram music as it is the wind instrument closest to the human voice, and renditions on it can easily be emulated by the vocal student.

What a sight it is to see the nAgaswaram players swaying to their own music and walking along in front of a procession of a God from a temple! The sound of a nAgaswaram is an instant association with festivity....whether religious or social.

I enjoyed writing all that!
Collapse