Ha, TOO many people are wondering about my LJ name....

I have posted about this before; I detest the word "Aunty". I know it is a nice innocuous and respectful term here in Bangalore, much like "madam" elsewhere...but...to me it has VERY negative associations. It conjures up, in my mind, a picture of this out-of-shape,malicious, prying gossip-monger, who wears a nightie throughout the day, and whose world is limited to her children, jewellery, sarees, and other forms of shopping, grocery or otherwise,..and the servants, let's not forget that! So I do dislike being called Aunty. ( I also dislike the Tamizh appellation of Mami, for very much the same reason.)

This dislike is further reinforced by the fact that all younger people, when they use the word, use it in this same,  definitely negative, sense. ("Oh, look at that aunty over there!" -- with reference to a young girl who is not well-groomed or dressed or who is too hidebound in her ideas.) One might as well be dead as be an aunty-fossil!

Of course I cannot get away from it altogether. To my child's friends and to my friends' children, the appellation has to--er-- apply. But I got around this by asking my child's friends to address me, not by my name plus aunty, but to use  the much more glamorous-sounding Italian name of de Ponti! (as in Sophia Loren's husband, hee, hee, hee!)

And a few other things happened...my neighbour's child, who grew up with us, always has called my spouse and me by our names; and it has become customary for his friends (he is now nearly 8) to do the same. So in our apartment building, too, I am used to the young children calling me by name, and I feel so comfortable with it because I know the affection with which they address me. Also, I have several neighbours/friends, ranging from 15 years younger than I am, to just a couple of years older than my daughter, who also address me by name.

And then, when I met

sanathreddy at the tiger census, they, too, resolutely refused to call us Aunty or Uncle, claiming  that we were not fossilized enough! I also joined the LJ community where people are more American about calling each other by name without having the Indian cultural feeling of disrespect if the name is used without a respect-tag like "aunty" or "akka" or something at the end. People like

fatmuttony were undecided what to do for some time and then decided to go with my preference.

sunson asked me once whether I wanted to perceive myself as young. The answer was a resounding NO. I am perfectly happy as I am, a nearly 52-year old, who has enjoyed every stage of her life and has no wish to be young again. (except, maybe,  for that lovely 23 inch waist I *used* to have?) But I suppose I am a little "American"  or "western" in feeling comfortable being called by name, that's all!

So now, when some youngsters who have been calling me "aunty" for many years continue to do so, it doesn't grate on my ears; but for newcomers, I just say, call me Deponti. (er..now my brother's wife calls me this, too!)

So all of you...you have the choice of calling me by name, or calling me Deponti....and any time you want to get my goat, just call me Aunty! I have a horrible feeling that there are going to be a spate of comments saying "Hello Aunty" after this! Must think up some return-compliments quickly...

premkudva's posts about his children and their endearing little foibles. And that (as usual!) inspired me to write about my own Hitlerette....

My "bebby" (that's her, at age 2, in my userpic!) was, of course, the most beautiful, intelligent and sweet child in the universe. (The funny thing is that EVERY child I know also fits this description...in the  parents' minds and hearts!) But....

Once, visiting someone just around dinner-time, I warned her in the car, "Don't eat anything there, we will go home and have dinner." (I did not add the words, "it will spoil your appetite"...my mistake.) During the course of our visit, H wandered off inside the house, met up with the grandmother of the family, and remarked casually, "My mother has told me not to eat anything here, but I am  hungry, so just give me a biscuit." Made for a great moment, when the grandmother came out demanding to know what was wrong with the food!

From her Class III composition book: "In school we wear skirt and shit." Yes, at that age, that was more true than she knew! She also once got concerned about a school circular warning about delayed payments by parents and came and asked, "Have you paid my feeses?" Ah, if only that was accepted currency...we would be RICH!

She was normally a very gregarious child, and would share her toys very willingly; and I had just finished boasting about this to our visitors when there was a HUGE howl from inside, the visitors' child came out in tears, with my daughter, her toys tucked under her armpits, coming out, yelling, " I don't like you! Go away!....When is this bad girl going home?" (Well, at least she didn't bite the child, like my niece used to do!)

We took her to the shops once, when she wanted to stay at home and play. Then we had to leave her in the car for a little while, when we were going from shop to shop, and when we came back she was very angry and wouldn't speak to us. "But we wanted to be with you," we told her. "Yes, that's why I am angry... you weren't with me,  were you?" she said, with unassailable logic.

"She doesn't eat this," I would say to someone, and would have to avoid their twinkling eyes while my daughter polished all of "this" off greedily. I once made the mistake of asking her, "But you don't eat this at home!" "You don't make it delicious like this," was her prompt reply, made so loudly that everyone around could hear it.

After she had accepted a second and a third biscuit from someone, I gently prompted her, "What should you say?" Prompt reply: " Do you have another one?"

She went to a birthday party, gave a gift to the birthday girl, and having tucked the hanky they gave her under her belt, demanded, "where is my return gift?" On being told that the hanky WAS the return gift, her response was, "Why don't you give some fun stuff to us, and give the hankies to our mothers?"

But by far the most memorable incident was when (when she was in Class X, I think) her friends' parents showed up on our doorstep at about 8.30 pm, asking us where H and their daughter were. We  were, of course totally ignorant, trustingly thinking they were at another friend's home. It transpired that they wanted to try how beer tasted, so they bought a bottle, and since the terrace of our apartments was locked, they had actually climbed from the seventh floor landing on to  the  drainpipe on the outer wall, and up the drainpipe to the terrace , bottle, glasses and all, in the dark....I still shudder when I think of what could have happened! I am amazed that the other girl's parents are even talking to us, all these years later....but I suppose THEY must have faced some incidents of their own!

This is apart from all the usual loud remarks of "Why is that man's nose so big?", "Isn't this the restaurant where you said the food is too expensive?" and "That lady is wearing a dirty blouse!" which all children unfailingly make...

premkudva , for bringing these memories back...Hitlerette is now nearly 28, lives right across the globe....did two undergrad degrees, two masters' degrees, and treats me like a child now...I only hope I have embarassed her several times now!


This is the Spathodia, or African Tulip; it was brought in from the African continent by Hyder Ali and his son Tipu Sultan's times by their emissaries; it has taken to Bangalore is a very popular avenue tree, scattering its beautiful blooms on our roads and footpaths. 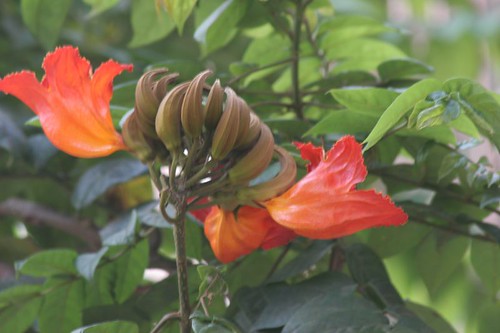 Yes, I know the pic could have been a little crisper, but oh well, I am not aspiring to be a great photographer...call that a documentation shot and be done with it!

Those of you who are used to shopping in gigantic malls...hold your breath. What I have pictured below is a shop; it is exactly as wide and as high as the doorway. I went during the afternoon siesta time, so I got this pic, which  belongs to the category I call the  DeepsanGeometry! 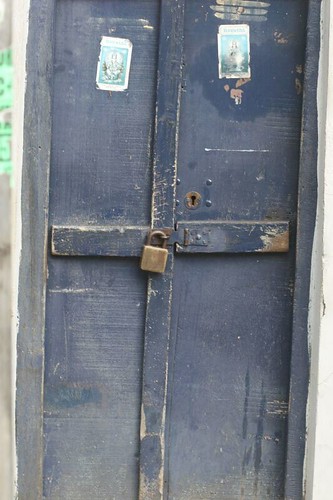 A shop in Jayanagar 9th Block market area. See the three horizontal markings on the top part of the door? Those indicate that the shopkeeper (in this case, I think it's a tailor) is a follower of Shiva. And there are two "god" pictures on the doors too...Ganesha on your left and Lakshmi on the right.
Collapse