I loved this "flower" on the bare tree....seemed to bring a smile to the dreary winter. The twigs made a lovely pattern against the blue. 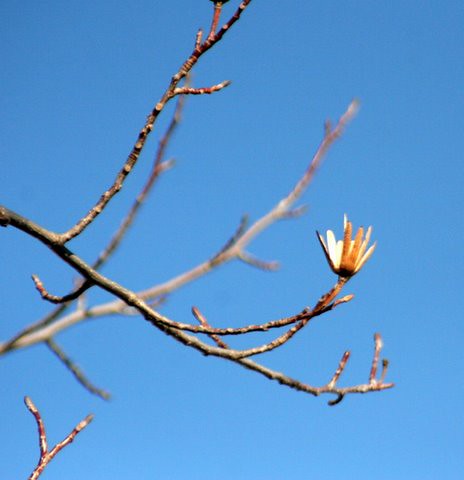 I wonder if it is a seed-case or just a dry part of the tree...

On Feb 11th, my city is going to have its very first Bangalore Bird Race .

This summons up visions of many of us,dressed in goatee beards,flowing white robes with burnouses, lined up with those thick leather gloves and magnificient-looking, keen-glanced birds of prey, racing them.

It also conjures up fancies of some of us, astride birds with tiny reins and tinier saddles, flying through the air competitively, driving our birds on with worms dangled before their beaks.

Wake up, wake up. This is a bird-watching race, actually. People should form teams of four and they will be given log-books and a checklist containing all the known bird-species of the region; they will go about (charge about?) all day, seeing how many they can see, and come back and file their reports. Obviously the team that has sighted the most bird-species is going to win.

I was full of enthusiasm when I heard about the bird race. I must tell you that at my level of expertise I am sometimes not able to tell the tail of a bird from its head--which the bird sometimes tucks into its wings just to confuse me further. The rules said there must be at least one expert bird-watcher in the team (if an expert birder said he had seen a Forest Wagtail, that would be much more credible than my making the same claim!) This was where I started imitating bird behaviour, scratching my head feathers with my talons, racking my bird brain. How was I going to find an expert bird-watcher?

Of course I know an expert birder. I know SEVERAL expert birders. But the point is, that most of them are likely to be the judges of the bird race, not its participants! They are all seasoned veterans who look into the unfathomable shadows of the trees and announce, "That's the Chloropsis". I am not kidding, you non-birding types...there really is such a bird; beginners like me would call it the Leafbird...IF we could ever spot one, that is.

Which brings me to the other reason why I would not be able to get a seasoned birder to be on my team. Obviously, a good birder would want his team members to help him or her spot the most number of birds and win that prize. So who would want to be on the same team with someone who was likely to spot,oh, three birds in as many hours, and be told, gently, that they were the Mynah, the Rock Pigeon, and good old Corvus Splendens?

Another thing about the expert birders is that everyone will be fighting to get them on THEIR teams. What chance would I stand in the melee? None.

But I did not despair. I managed to trap three of my kind-hearted birder friends into forming a team with me. It helped that one of them had already registered. He had said, "I have no team-mates. I have no car." I told him, hey presto, he had these now; the only thing that he didn't have was an outside chance at even one of the prizes.

Now that I was sure I was going to participate, I started looking at the rules in detail. And I was much struck by one sentence, which said, right after telling me that a checklist of the birds of the region would be provided : "If you see a species which is not on this list, please write it down."

I know what this is going to lead to. We are going to be the only team, possibly, to have this extra column filled in. I would certainly have mentioned spotting the following:

3. Bird of Paradise. (I definitely saw these in someone's garden.)

The judges would certainly have something to perk them up from the boring task of collating results, the anecdote would go down in birding history, and be repeated over campfires at every Bird Race...I would be famous!..more likely, the birders will form a hollow square and my wings will be clipped and my name erased forever from all birding records and never spoken again....

But we have plans, never fear. Plan A is of course, to spot as many birds as we can and turn in our log book...but there is the evil Plan B, which is to creep about behind an expert team and as soon as they spot something (they would exclaim its name in excitement) tick it off in our checklist. There is the even more evil plan C where we dig out the field reports from the archives of the local birdwatching society, and tick off everything found on the best of them. (There are, helpfully, several such field reports, which just say, "I went to XYZ Place. I saw...",and a numbered list of birds follows, the number often going up to 133.) Plan D calls for us to go off on a picnic and join in blithely and shamelessly for the dinner at the end of the evening.

So wish me and my team-mates luck! I am now going to open my birdbook and start swaying to and fro, repeating, monotonously, "Bright-Headed Cisticola (no, that is not a carbonated beverage), Red-Faced Liocichla (not an embarassed Italian),Rufous-Tailed Shark, sorry, Lark".....

And one more thing, the team that lists the Common Swift or the House Swift of the Asian Palm Swift may not win...because..."the race is not always to the swift", remember?
Collapse