My wildlife experience is inextricably tied up with the several avid wildlifers I have met. Just now when I saw

sainath's post about the Grey Headed Fishing Eagle, I instantly thought of

yathin...even though HE now signs himself Elephas Maximus! So I was musing..and I realize that I think of some particular fauna when I see the names of some people...let me describe the associations at least with some LJ-ers!

kalyan....the bonnet macaques of BR Hills and the Crested Serpent Eagle which he pointed out to us when we first met him in that magical place...

chirdeep_shetty...the dhole and the chital, the former usually hunting the latter!

kaadupapa..no, not the kaadupapa (the Slender Loris), but the elephants which he snapped in that beautiful photograph...

Sometimes one need not go for the rare and exotic...what's right before one's eyes can be very appealing too!

Here's the little squirrel (ours are very much smaller compared to their American cousins).... 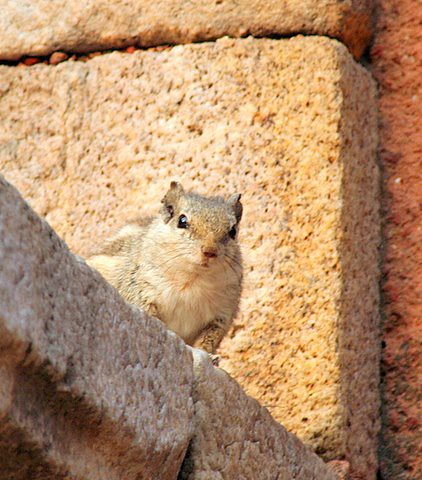 I loved the setting of the little fellow amongst the angles and the lines.

The caption could either be, "Life rocks"...or "a life on the rocks"...but the squirrel looks, literally, bright-eyed (and bushy-tailed though the tail doesn't show here!), so I guess it would be the former.
Collapse