Parenting is such a difficult task...from the time the baby makes its appearance in this world, you are actually more vulnerable than what a friend of mine once called "a small, needy specimen of humanity". As you watch anxiously over the little one, you yet must also step back and allow more independence, as that is the only way the infant/toddler will grow up into a person. You constantly worry over little crises as they happen, and hopefully, the child comes through them...illnesses, falls, physical injuries and later, the traumas that the child weathers mentally...and hopefully, you make it with the child intact...only those who are making, or have made, the journey, realize how beset with pitfalls it is. You take your eye off the child for just one minute and trouble brews...but with luck, the trouble is something that can be solved, and you and the child go forward to the next day.

How awful, then, when that one moment of distraction, that one minute when you are not on high alert, ends in tragedy...this just happened to a friend's friend, and like every parent, I felt my heart wrench at the news of the child's accidental, and sudden, death. How will the parents face the horror of the guilt that will be gnawing them, the awful thought, "If only I had kept watch..." I hope they slowly come to realize that it is just not possible to be alert every waking and sleeping moment of a parent's life...the loss of a parent is bearable as being part of the natural cycle of life, but the loss of a child is beyond bereavement; as a caregiver, it is all too often a reproach to oneself forever, of what one did or did not do, that could have saved the little one.

By very popular demand, here's a picture of a sight that brings a fatuous smile to KM's face: 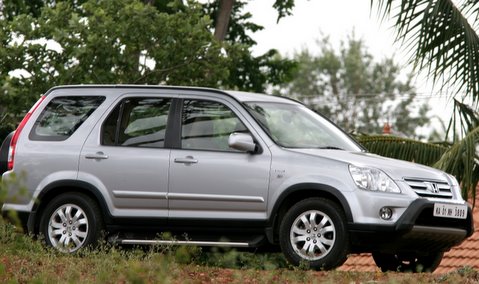 I am ambivalent about this car,which is a HUGE gas-guzzler but apparently has far less emissions than other cars in the same class. And..th car IS a dream to drive, so I am generally torn between not wanting to to take the Honda CR-V out, and then wanting to drive, too...very inconsistent.

I compromise by cycling and walking wherever I can, and enjoying the drive when we DO take the CR-V out.
Collapse