A snap of the road leading away from the Ranganathittu river landing... 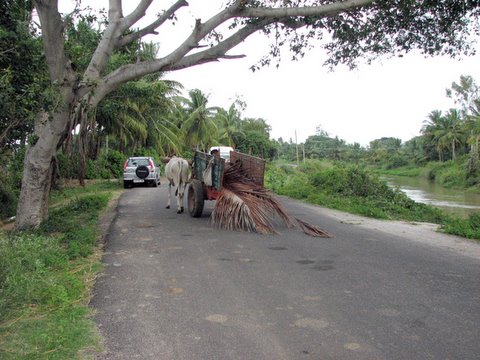 I like the way the CR-V is right next to our age-old form of transportation, the bullock cart, laden with palm fronds which will be used for fuel, to to make a thatched roof....

I love the beauty of the banyan tree (Ficus benghalensis), an ethnic tree, that spreads over the road, casting welcome shade....

It's a beautiful, calm evening. Somewhere, beyond, the rushing world whizzes past, but here it's peace and quiet, punctuated only by the cowbells and birdsong.

Sunrise and sunset are, to me, really wonderful times.

Reading the journal of

premkudva is so enjoyable, with the antics of his daughters bringing a smile to my face and brightening up many a dull day. And the best part is that it brings back so many memories of my daughter's childhood...

I had just taught her how to "borrow" numbers from the next column and do subtraction ( I don't remember if she was in Class II or III at the time) and she came back from the end-of-term examination with her maths paper, which I proceeded to check. On one sum, she had a most weird answer. Unable to find out how she arrived at that answer, I asked her. "I borrowed, like you told me!" she said proudly.

Turned out that she had borrowed a number...from the next sum! Her child's logic was perfect..how was she to know that the other sums on the question paper were off limits for borrowing?

My bebby, so grown up, so far away today...I go back and enjoy your childhood, now and then.

The family culture in India gives prime importance to the family unit over individuals, and clubbed with our culture of unquestioning respect, it can often be taken by parents to mean that they have complete control over every aspect of their child's life,even when that child has turned into an adult.

In the past few years, I am increasingly coming across many youngsters who find this quite stifling. While they do love their parents and are willing to obey them within reason, controls that seem to treat the youngster as a child and not as a grown person make the youngster's life increasingly difficult, as s/he struggles to be an adult outside and a child at home.

One of my nephews was berated for talking to his neighbour's 17-year old daughter. I ask you! He just talked to her across the garden wall..Well, maybe that was an extreme example, but I also know of parents who said, "The child will go out of control if we give hem hes own way..." as if the youngster would have none of the values the parents are supposed to have installed!

A young man or woman may go away, live apart, finish hes education, and get a job. But when s/he moves back to the parental home, all the controls that were in effect when the child WAS a child seem to take effect again...no partying, constant watch over the whereabouts, no permissions granted...

How did these parents handle things when the child was away? Could they control the child's early homecoming, or behaviour in other ways? And if they couldn't control it then, why would they want to do so now?

The child has chosen to come back and live with the parents, but s/he is no longer just a child. S/he is an adult and should be treated that way. The parent has to consciously remember that actually, this adult requires NO permissions or sanctions at all. That s/he abides by the rules of the household is entirely because s/he chooses to do so, especially if the youngster is now financially independent.

But parents often seem to forget this. They keep on controlling the youngster's activities and very often, this sows the seed of both discontent and rebellion. Very often, the young adult takes the easy way out by lying to the parents about hes activities, not realizing that by doing this, s/he is putting hesself in the wrong, too.

Less often, the young adult makes an honest,principled stand for he srights. Sometimes...rarely, alas...a sensible compromise is reached, and the parents start treating the young person as an adult and peace is restored.

More often, though, emotional scenes result. It is the parents who seem to have the need to control; they try everything, including emotional blackmail, to get the youngster to conform to their rules, many of which the youngster finds both archaic and illogical.

Parents keep quoting the "safety" of the child as a reason for their control. I find this very similar to Islamic extremists demanding that women stay at home and wear the burqa, to be "safe". Parents seem to confuse ignorance with innocence. A young adult cannot be sheltered away from the world; the whole job of the parents is to prepare the child for adulthood...and what is the use, if then, we prevent our children from BEING adults? It's like telling a baby never to walk because there is a risk of the infant falling and hurting itself...

In India, I find so many parents (and children) proudly claiming things like, "I don't smoke/ drink in front of my parents/ S/he doesn't smoke/drink in front of me." What's so wonderful about this? If you know, and your child knows, the s/he smokes or drinks (and I still can't understand the moral value put on these two activities), why does s/he have to do it behind the parents' back? Is hypocrisy such a great quality, to be praised? Do we really want our children to be Jekyll and Hydes, have one bland personality in front of us, and show hes wild side when we are not looking?

I have heard several parents proudly say, "S/he will do exactly as I say." Oh my goodness! Do you have a child or a robot or a pet dog? If your child does not have a personality of hes own, surely you have been too restrictive?

Parents cannot...and therefore should not try to... control grown-up children. In fact, at any age, unreasonable control as a parenting tool sows the seeds for its own failure. If parents are reasonable, and a good set of parameters is worked out for the young adult living with hes parents, it's a great outcome, and both generations benefit. The filial bond becomes the stronger for the mutual respect, tolerance and understanding, and the child/parent relationship evolves into a very deep and strong adult/adult relationship.

Of course, not all children are the same; some are content to think like their parents do, and in these cases, it doesn't really matter if the relationship doesn't evolve very much. But in most other cases, the transition is required..and the effort must come mostly from the parents.

We are proud of our Indian culture, and generally, with very good reason. But there are areas where our extreme stress on obedience should give way to mututal respect instead of permanent child/parent relationship.


I think it's the parents who need to grow up. After all, the young adult is young, and will be hot-headed and eager to try life. It is up to the parents to be wise and mature and handle the butterfly emerging from the pupa. The most successful parents are those who produce, not children, but mature, responsible adults.
Collapse