I should have known that I could not post a pic of a yacht, even in the background of a picture, without getting requests to post photos of it, too! I got one request over LJ and several over email..so for those who want to see the yacht, the "Taj Cinnamon Coast", riding at anchor in all her beauty...here's a pic of the hotel with the yacht, from a distance: 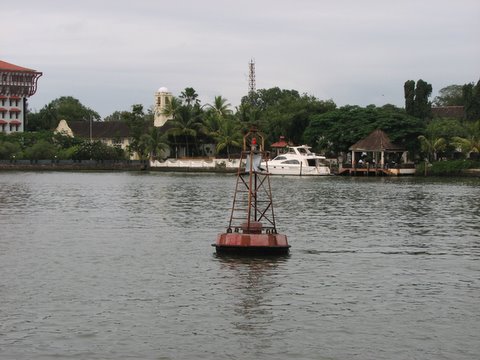 The hotel is NOT that high-rise building on the left that's a public building,which I should remember from all my visits to Kochi...but don't!


(Update. Srikrishna, a friend who reads my blog-but never comments!- says that it is the Kochi Port Trust Building, which of course I should have remembered! Thanks, Sri.)

... the heritage part of the hotel is hidden behind the trees, and the small tower block is to the right, not in the pic at all.


And here's a close up of both the yacht and the powerboat that the hotel uses: 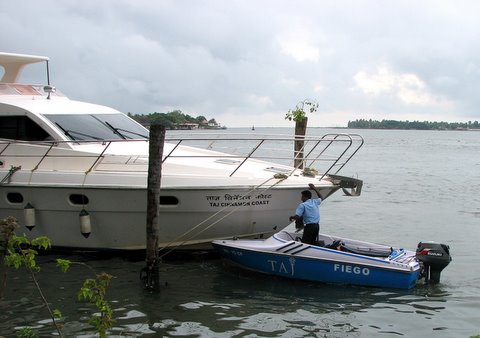 Of course I took a guided tour of the yacht, though we didn't have the time to spend one night on it, as was advertised! We also didn't do this because the rooms at the hotel (well, at least the ones facing the backwaters, I presume) had a very intriguing feature...the bathroom had a blind that could be pushed up, so that whatever it was you were doing in the bathroom, eg soaking in the tub, shaving, or merely reigning on the throne, you had a view of the outside!

Here's the view OF the bathroom from the room itself: 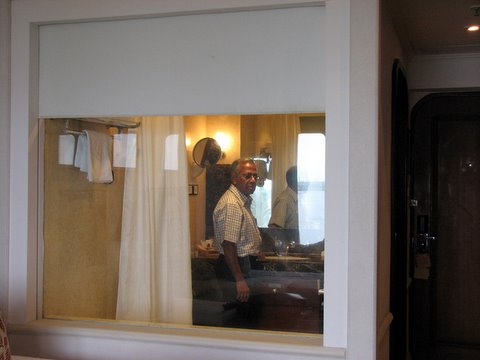 And here's the view FROM the bathroom, you can see the tub in the foreground: 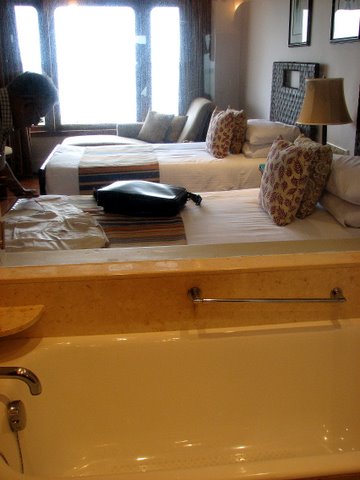 and for those who are curious about that elephant backside I had posted earlier, here's the outdoor pavilion with one corner showing a sitting elephant ( a most awkward pose to depict, I thought!) 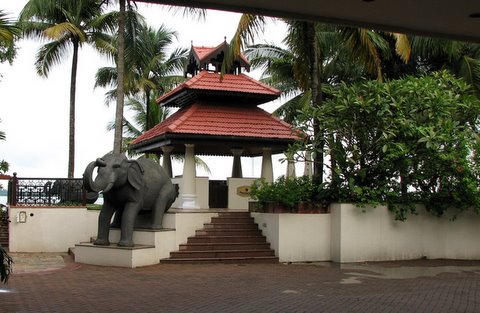 We did wish we could stay a day more, at least, at this place!

Here lies John Bunn;
He was killed by a gun.
His name was not Bunn, but Wood;
But Wood would not rhyme with gun..
But Bunn would.

I have, for a change, been watching TV (usually I tape a couple of programs like the Tonight Show or Thein KiNNam and watch it at some point, that's all) and had tuned into NDTV...and I feel so bad...a teacher is accused of making a pornographic movie with her students; a child dies because the ambulance is stuck in a traffic jam on the way to hospital; a mob rampages because some youths were killed, and that results in yet another death; and so the gruesome news goes..

NOT being in the news is something I am profoundly thankful for. My life goes on its even tenor; everything is well, and small troubles are just that...small troubles.

I am incredibly lucky to be a person to whom things DON'T happen. "May you live in interesting times" may, or may not, be a Chinese curse but it is a curse nevertheless.

Oh well...here are two pictures from my trip that I really like; the first is sunset on the evening of the 26th, in Kochi, on the backwaters: 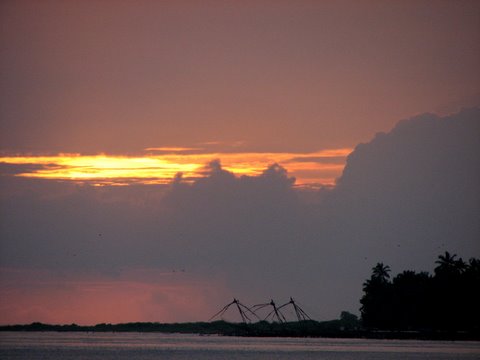 Behind the fishing nets, the rain is still coming down...


And the second is the early morning sun from my aircraft window as we flew over the Western Ghats, towards Bengaluru.... 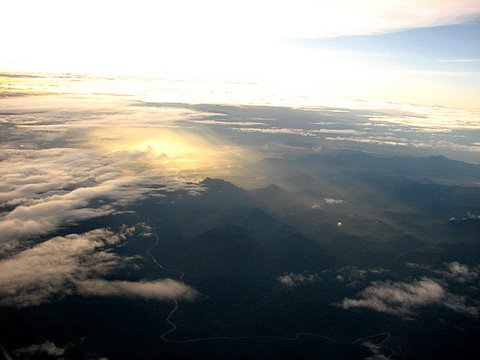 Both these are for

asakiyume, who opened my eyes afresh to the beauty that the sky can bring. (In fact, I think you should change your name to "askyume". OK, O.J --Orrible Joke-- over.)


And...let me mention once again how MUCH I enjoy that Canon S3....!
Collapse