No, I don't mean the violent posters that many rock bands put up!

One of the practices I have seen in Tamil Nadu (I don't know if it also exists elsewhere) is to print notices of someone's death, and stick them up in public places.

Here's one, stuck on the back of a bus: 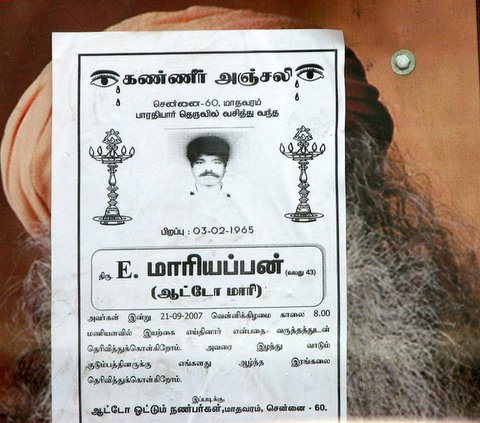 This particular one mourns (the title says, "kaNNeer anjali" or "homage through tears") the death of E. Mariappan (alias "auto Mari") who was an auto driver; it has been paid for by his auto-driver friends, and mentions where he lived, and the date of his birth and death.

No, I don't think I am violating anyone's privacy by posting this photo; after all, the original posters were stuck everywhere in public places.

But I am still mystified by why this is done. Would it not be more fitting to have the friends pay for a better funeral...or give the money raised to the deceased's family? The posters might last for a day or two, that's all...so this practice really does puzzle me a lot. It must cost a fair amount to print, too...and the bill-posters would have to be paid as well. Does looking at the poster solace the family or friends? What is the point of having unknown strangers looking at it? I can't get it....

I often see water tanks on top of houses that are built in the shape of Maruti cars, or even boats...but this one really took the cake. 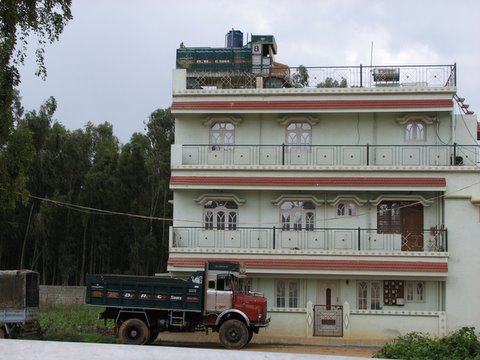 Obviously, the owner of the house owns that lorry, and wanted to immortalize it as a water-tank on top of his terrace...what a beautiful match!

I just couldn't believe that the lorry was also parked there, AND in just the same position, AND I was able to notice the similarity...the odds of this happening WHILE I had a camera ready to take the photo were mind-boggling!

This is what I would really call being in "high humour", I guess!

The house is on the Ring Road just before the place where to-be-constructed road (the piece of land is under litigation) joins up with Bannerghatta Road. When coming from Hosur, you take a turn on to this road and then, just past this house, take a turn to the right and go bumping for about 2 km and join Bannerghatta Road.

I found this insect on the rock when I had been to Bheemeshwari with the Clean and Green group for the plastic clean-up.

I could hardly see it against the rock, and had to photograph it very carefully. I do not know if it is a moth or a locust or a grasshopper or.... 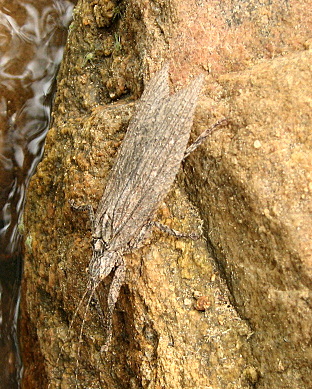 Would like someone to id this for me. The creature that is almost not there...beautifully camouflaged.

The shiny part on the upper-left-hand side is, alas, alas, a crushed, algae-filled PET bottle. I went to pick it up and saw the beautiful creature.

Update on 11 oct...Karthik tells me that it is an Orthopetran, that is, it belongs to Orthopetra, which includes crickets,grasshoppers, etc...so that id is good enough for me.
Collapse