in a village near Tumkur, I have been wanting to go... Our last try, last week, was a washout because the roads were blocked (due to political upheavals in the State which have now resulted in President's Rule in Karnataka. But I hate talking about politics.)

Finally, yesterday, everything fell into place, and

sanath, Anush's friend Ajay, and I set off, seeing this as-usual magnificient sunset on the way: 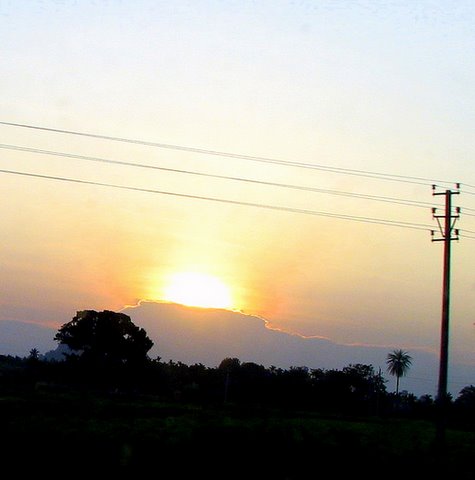 I also snapped this lovely figure of the Monkey-God, Hanuman, on the roadside as we battled (or rather, Ajay did) the evening traffic: 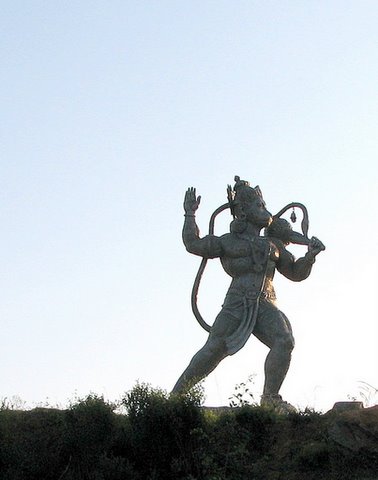 
In spite of my setting the camera to take RAW as well as jpeg images, I guess I must have changed the settings (though Sanath did check and say I was set properly) because I got only jpeg images when I came home. Also, though I had set my ISO properly, I don't think I overexposed properly, so even on the Canon 20D, only this somewhat foozly shot resulted. 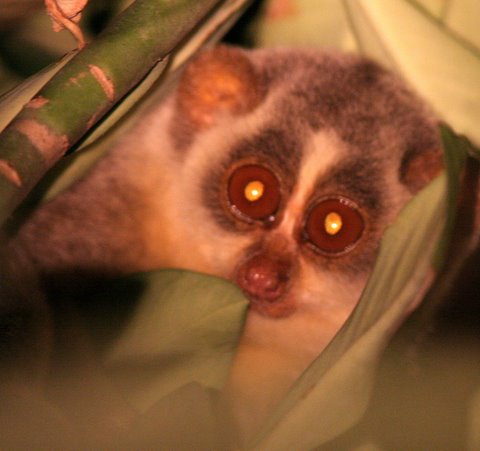 But our eyes made excellent cameras, and we were very happy with the sightings that we got. And when I say my memory is full of images of the Loris, I am not talking about my CF card! The animals were VERY light-sensitive, though, with those large eyes, and moved, surprisingly quickly, out of sight as we tried to look at them properly.

Well satisifed, we realized that all of us were very hungry (some even more than others, because lunch had been skipped)..and decided to come back, well content with what we had got.

On the way home, we had a Narrow Escape, as a lorry with an extra-long trailer suddenly cut across us, and as Ajay said, the "loris" spotting skills that we had were totally eclipsed by the "lorry's" spotting skill of Sanath, which averted what could have been a major accident (names in the papers, no more LJ from deponti or anushsh, condolence letters pouring in, etc, etc.) Ajay's driving skills and excellent brakes really saved us from broadsiding into the trailer...