When one is a housewife, EVERYONE thinks they can phone whenever they wish. 95% of the time of course, there is no problem. But today the viral fever which started as a sore throat on Thursday night, worsened with the day in the sun at Mydenahalli on Friday, and developed into a raging fever on Saturday and Sunday, was wreaking havoc. So I was trying to sleep and kept getting calls from....

ShareKhan (made me realize I have not yet registered at the DoNotCallMe or whatever it is that prevents any of these idiots from cold-calling).

My bank manager, to tell me I should have received a courier 5 days ago. Big Deal Mr Manager, you KNOW I haven't got it yet, that's why *I* called *you* in the morning!


The double-glazed glass guy, saying he can't come today. Some repairs have to be carried out and for the last month and a half they have been leading me a merry dance.


Someone asking me (I am not joking) why my neighbour opposite is not answering her phone. I want to kill this person, or at least, infect him with my viral fever. When I see him next I am going to KISS him and fill him with Germ-ans. I hope it is truly the kiss of death for him.

My apartment building committee members, SIX times, on the intercom, asking where KM is. And btw that's another terrible story that I have to tell....later, let me finish this rant.


Well.intentioned friends, three of them...but when you know that someone isn't well, the afternoon is not the best time to call...I certainly didn't mind the morning calls!

In keeping with my starting with something from the centre of the day.... 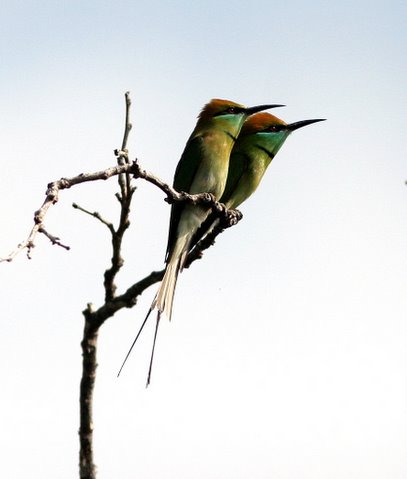 NOW let me start...and the start itself was very delayed...I thought that the meeting point was in front of my place at 4 am, so Arvind Badrinarayan also landed up then...and of course, at 4.30 am,

anushsh calls me to tell me they were just leaving!

We left at 5 am, and alas, the roads were extremely bad, and we missed our way (as the email directions stated we would!) and did 16 km each way before getting on track again.

The good part, of course, was sighting an ORIENTAL HONEY BUZZARD, and a really fantastic aerial/seating display of a group of SMALL GREEN BEE-EATERS (two of those in the pic above, and one landing beautifully, here) 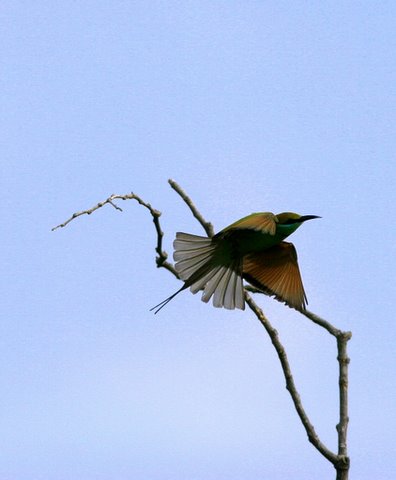 
On the way back, we took Shiva's dad's advice and took a far, far better route...but still, it was a major amount of driving for Shiva and with all the running in the sun, he must have been dog-tired (er, buck-tired) the next day! We had brunch at 4pm and reached home by about 7.30pm (I think Shiva must have reached HIS home by 8.30 pm!)...I will leave you with the beauty of the misty morning, that met us at the outset of the day...is it any wonder that I love Karnataka so much? 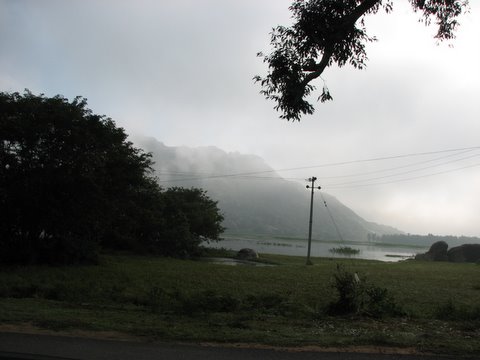 A wonderful, though tiring day; it was a real pity that the next morning, I could not get up in time for the drive to Chennai, and we left late, with a "hot woman" (103 degree fever!) sitting in the back seat so as not to infect KM!


However,one negative note...the "sanctuary" is a shambles, though there are a few sparse signposts for the "krushna mruga".... a broken-down gate, no information...cattle, cowherds and blackbuck coexist, apparently not peacefully...well, we still spotted three large herds, so there is some hope, I guess!

Can this be verified?

Oh, no, I am not curious enough to go calling the numbers! Found the sign on the Old Madras Road...

And Dr V R Jayachander doesn't spell his name in English...maybe he is yet to get his doctorate in "nameology"....

But it does say, in Tamizh, that he is a "formed" (or "formet"? Could be either) numerologist,"bone-ologist" (I am not kidding),nameologist,gemmologist, graphologist... that is the, er, "gist" of his notice.

But if there is REALLY a doctorate course in Numerology...I would be intrigued...
Collapse