A wedding, of course, should ideally be a union of two minds,souls and bodies, without external considerations, especially financial ones.

But sometimes it happens that someone from a solid middle-class backgraound meets another person from a very wealthy background, and they marry.

Well, sometimes the two families have mutual respect and things are smooth.

But sometimes, what guests can see is the wealthy family behaving in an arrogant way, and not respecting the other family enough.

This leaves a bad feeling in what should be a happy occasion....

I used to think that the bank balances of the families whose children are marrying didn't matter...but over the years, I have learnt that it often DOES matter!

But a wedding where the families do not feel equal to each other (or, to be more precise, one family feels superior to the other for any reason...in terms of finances, or looks, or "culture", or education...or...), the guests do go home rather apprehensive of the couple's happiness....

It was Thanksgiving yesterday, and along with so much else that I am thankful for, I gave thanks for the most wonderful "sambandhis" I could have had...my life has been enriched by D's parents, grandparents, and extended family. D's dad made a lovely speech at their engagement; he said that in an arranged marriage, the families bring the children together, but in this marriage, the children had brought the families together! We were both struck by how many similarities we found with each other, rather than our differences.

D's dad is, just like KM , a mechanical engineer and an MBA, and they are such similar people that D's mother and I find it funny!...his grandfather was the Dean of Indiana University and his wife is also a doctorate in Education, and a very good painter as well...D's mom was a Math major who decided to study architecture after her sons were born! This gels well with us Tambrams who give a lot of importance to academics and education.

DnA are visiting his parents, and D's grandfather, who has come from Florida to spend Thanksgiving with his son,is getting the news that his son's son's son is on his way ....! In our culture, we say that when a man sees the "fourth generation" he can have the 80th birthday celebrations...D's grandfather laughed when I told him that...he is 93!

Couldn't have asked for a better family for my daughter...she did a great job of choosing, I must say!

From the tagline of Radhika Singh on INW:

What a pithy, witty way to put it!

When she was young, my daughter regularly wrote for a children's magazine called Target, which was a very good magazine (however, it later became very urbanized and westernized and I wonder if it still exists... I know Tinkle is one magazine that is still going strong here.)

Here's her effort to write like Shakespeare..that's the page, followed by the text...this was written in August 1995, when she was fourteen years old... 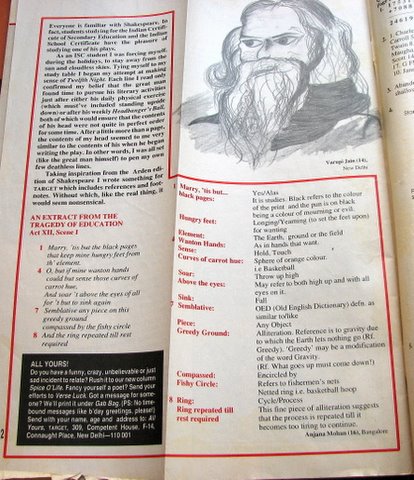 Everyone is familiar with Shaekspeare. In fact, students studying for the Indian Certificate of Secondary Education and the Indian School Certificate have the pleasure of studying one of his plays.

As an ISC student, I was forcing myself, during the holidays, to stay away from the sun and the cloudless skies. Tying myself to my study table, I began my attempt at making sense of "Twelfth Night". Each line I read only confirmed my belief that the great man found time to pursue his literary activities just after either his daily exercise (which must've included standing upside down) or after his weekly "Headbanger's Ball", both of which would ensure that the contents of his head were not quite in perfect order at the time.

After little more than a page, the contents of my head seemed to me to be in very similar shape to those of his when he began writing the play. In other words, I was all set(like the great man himself) to pen my own deathless lines.

Taking inspiration from the Arden edition of Shakespeare, I wrote something for Target which includes references and footnotes. Without which, like the real thing, it would seem nonsensical...

AN EXTRACT FROM "THE TRAGEDY OF EDUCATION"


1 Marry, 'tis but the black pages
That keep mine hungry feet from
Th' element
4 O, but if mine wanton hands could but sense those curves of carrot hue
And soar 't above the eyes of all
For 't but to sink again
7 Semblative any piece on this greedy ground, compassed by the fishy circle
8 And the ring repeated till rest required

black pages: It is studies. Black refers to the colour of the print and the pun is on black being a colour of mourning or evil.

Hungry feet: longing/yearning (to set the feet upon), for wanting

Element : The earth, ground or the field

4 Wanton hands : As in hands that want

Above the eyes: May refer to both "high up" and "with all eyes on it".

7 Semblative: OED (Old English Dictionary) definition as "similar to/ like"

Greedy ground: Alliteration. Reference is to gravity due to which the Earth lets nothing go (Rf. Greedy). "Greedy" may be a modification of the word gravity.

Ring repeated till rest required: This fine piece of alliteration suggests that the process is repeated till it becomes too tiring to continue.

It made me laugh then, and it makes me laugh now...
Collapse