It bothers me very much that someone close to me is becoming a total Tambram in terms of...gossip. Not malicious gossip, but the extreme interest in people's lives which I seem NOT to have developed at all. It bugs me that right now, this person loves to talk about what happened to various people, .who's related to whom and whose marriage failed and who took help from whom...I think it is impolite to have too much of interest in other people, but here's someone who, recently, is thoroughly enjoying talking about who is doing what....It's actually, I think, a necessity to make a lot of connections,and have a lot of information. That's all...at least, in this instance.

What DOES everyone think of gossip, not the malicious or envious kind, but the eager updating of information about other people's lives?I *always* feel that we are hearing only one side of any of the "bad" stories and hate repeating them....but cannot pass any moral judgement as there is absolutely no malice involved in all this recital. And yet, it bugs me...

I canNOT get over it. They are clothes of torture, garments of ghastliness.


I mean hospital gowns. Recently, my daughter had to wear one.

They instantly rob one of the dignity of an individual, and by exposing one's back and backside, bring one down to the awful anonymity of a that sad creature, a "hospital patient" or, even more facelessly, "Bed no. 4568" or "Room 410B".

But WHY? There must, I realize, be a specific reason why they flap open at the back like that. Perhaps, nurses and others want instant access to all sorts of skin and muscle, and it is less of an embarassment to show one's backside,which looks alike on one and all, than one's...er...frontside, which is rather more unique and more "private"....but why on earth must they have those awful two ties and no privacy at all otherwise? Instead of those two horrible ties, a strip of velcro could ensure instant access and yet ensure some semblance of coverage, too, when access is not required.

My daughter's hospital gown was even more hilarious as it came with an assortment of press buttons which took 3 of us 15 minutes to figure out...the press buttons, pressed, created two sleeves...but of COURSE the back of the gown was nice and ...free..and open, and if the situation had not been so serious, it would have had me laughing right then. Why were those press buttons needed for the sleeves? Why could they not be used for the back? I still cannot work it out.

And to add insult to injury, the gown often results in a feeling of chill and cold on one's unprotected body in the air-conditioned hospital room, especially when one is ill and has low resistance or endurance. I always visualize a person in hospital having goose-pimpled skin with that kind of...er, exposure.


Here's the lovely cartoon that brought on this post... 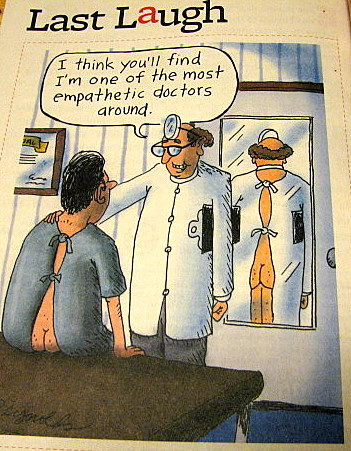 As Americans would say, of things which are not good...."bummer"!!

Yesterday, A was down again, and decided that the best way to cheer herself up was to go to a play; so she chose the Kirkwood Theater Guild , where there was a production of The Fourth Wall by A R Gurney , an American playwright.


The play was very much in the style of Ibsen and Shaw, both of whom were extensively quoted in the course of the action...and though I felt that the cast were rather self-conscious (well,it was a self-referential, deconstructionist play to begin with) about their being actors on a stage, they warmed up as the play went on , and it became very enjoyable. Much of the political humour, though, it topical, and the playwright would have to keep updating it or changing it if the play is not to become dated or stale. Steve Callahan was Roger, Ken Lopinot as Floyd (an excellent comic assay), Colleen Malone was Julia, and Janet Roby Schwartz was Peggy. Jan Meyer directed the play, and Danny Austin was the asst. director.