anushsh's birthday (I am terrible at remebering to wish people on my LJ, and this absolutely rotten internet connection is NOT helping!) and we took him out to dinner at Kamat Bugle Rock . The food was not as good as usual, though the jolada rotis that originate in Dharwad were soft and delicious.

Here are Anush, me, Pavitra and KM at KBR: 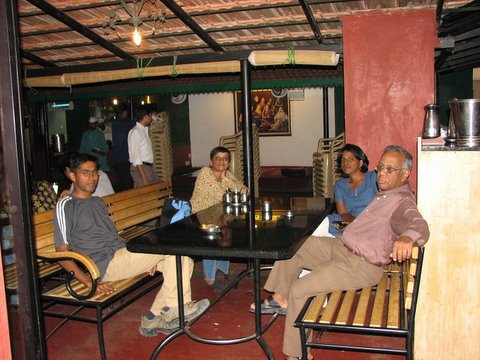 Here are KM and

amoghavarsha giving AS his (much fewer than he should have got) birthday bumps . 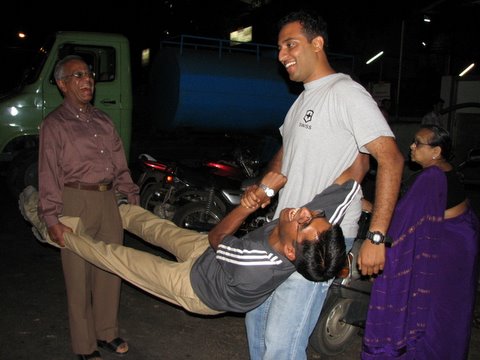 Let me close this and post it before my internet connection decides to act up!

I wanted to post this on Metblogs, but the page I get doesn't have a link that will let me post (Metblogs was re-designed recently and I guess they still have glitches!)


So here's a delightful scene I snapped last Saturday in Lalbagh: 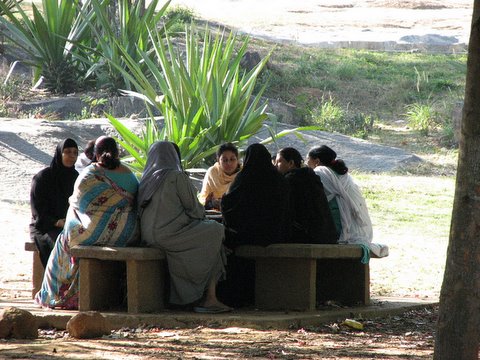 Are those women picnicking in the park? (Couldn't see if there was food inside the circle.) Do they have a more serious agenda? What could have brought so many of them to the park, so early in the morning? I preferred not to go up and ask, and leave explanations to my imagination...


Here's to women everywhere. I don't say we are always the angels that all those internet forwards talk about; we are human, we have our vices and failings, too...but in general, it's a sisterhood that I am proud to belong to, and here's wishing for the day when each woman will be able to realize her full potential.....when gender will not be an issue worth discussing, and we don't have to have a special Women's Day, because every day will be one.


I have now successfully put this up on Metblogs, too...!

I find it very difficult to deal with initials. Those letters that, to everyone else, seem to denote something meaningful, but to me, remain just that....having just seen pictures on INW (India Nature Watch) of the CSE (Crested Serpent Eagle) and posted from LRK (goodness knows what or where that is)... (update, that's the Little Rann of Kutch, in Gujarat, apparently!) I feel that initials are just things invented so that the user can appear more knowledgeable and jargon-enabled than the non-initials person. Even when I can work out part of it, I can't work out the whole. I used to keep reading aout SGNP and realized that the NP was probably National Park, but it took me a long while to work out that SG was Sanjay Gandhi. (FG and IG had RG and SG, you know, and RG married SG and they had PG and RG,who are trying their hand at extending the dynasty . SG married MG but IG threw her out after SG died, and VG is not in the polictical picture yet.)

And even when I *know* what the initials stand for, sometimes the initials and acronyms suggest hilarious things to my mind. AIADMK (All India Anna Dravida Munnetra Kazhagam, if you can pronounce that) makes me say, "Ayya, DMK!"... a kind of excited exclamation. COMED-K (the joint entrance exam for Medical,Engineering, and Dental students, Karnataka) makes me add a "Y" at the end of the COMED and laugh at the way the unfeeling authorities have been playing with the lives of hapless young students for the past few years. (COMEDY-K would also describe the political scenario of Karnataka very well.)

IWPTRTFNOTAB. (I Want People To Refer To the Full Names of Things, Animals, and Birds.) So please, I don't want to hear about LBV's and RRP's (Long-Billed Vultures and Rose-Ringed Parakeets) or I will GUIS (Go Up In Smoke.)

KEB (Kai Enthi Bhavan, describing the little Darshini eateries that dot Bangalore..."kai enthi" means "holding in one's hand" and refers to the way patrons stand up in these joints, either at tall tables, or holding their food plates in their hands.) KEB is usually Karnataka Electricity Board.

HMT (Half Mottai Thalai..."half head bald"..obviously to describe one with a slipping hairline) HMT is usually Hindustan Machine Tools.

I would love to hear some other cross-lingual ones like that....
Collapse