Found this on the LJ of

Can you believe that they don't show what Brian did to the guy!

A very enjoyable trip to Madurai and a terrible (yes, still) internet connection meant no LJ, and have been sitting up at 3am, catching up with friends' posts. When I am reading so many posts (the power has gone and I wonder when the UPS will pack up, and kill off my connection, or when the connection will drop), I don't have the time to post comments...and I don't like that..it's like keeping quiet instead of participating in a conversation!


But...here are a LOT of pics from the Madurai trip. We had been there for the 60th birthday celebrations of close friends.

Here are two images that I love; they are both from the Meenakshi Amman Kovil in Madurai.


The first is the way the strong sunlight comes, quite literally, pouring in through the gaps in the granite beams.....it illuminates this stone elephant: 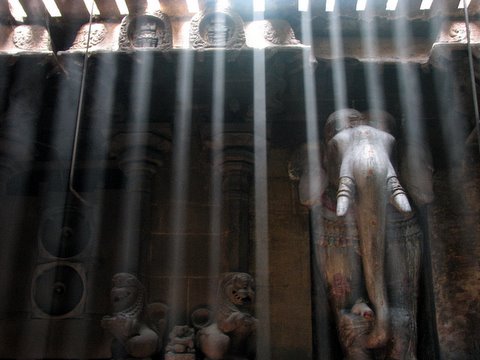 Legend (the temple has thousands of stories for almost every piece of sculpture there is in it!) that once, when the Pandya king offered sugarcane with humility and faith in Shiva, one of the stone elephants came to life and ate the sugar cane.... 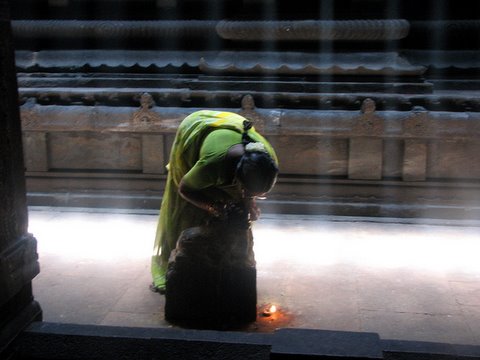 That was a woman devotee whispering her wish into the ear of a small statuette of Nandi
, the vehicle of Shiva...

I close with this picture of one of the sculptures on the pillar, in the Meenakshi temple, which has turned into a shrine by itself. It's of the monkey god, Hanuman or AnjanEyA, (click on that for some mythology!).


Any bhajan or musical function in south India closes with the AnjanEya Uthsavam (festival); the god is considered a fitting finale to events, in the way that Ganapathi or VinAyak is considered an auspicious beginning. 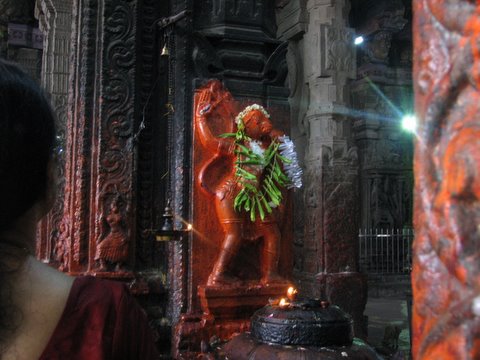 A short trip to Madurai, resulting in a loooong post....!

Yesterday a friend of mine moved back into Bangalore, and we went over to help....and I couldn't help wondering why we seem to surround ourselves with so many more possessions than we could possibly need.... why do we tend to accumulate so much of stuff? Everything looks so attractive, so potentially useful, and sometimes so ..just must-have...when we see them, and they come to join us in our daily existence. And then, of course, there are the things that are given to us by those around us; they are tokens of affection, so we accept those too, and give them place in our homes....but the sad truth is that so much of our possessions are only clutter, and we don't have the inclination, the ability, or the clarity to identify them as such, and get rid of them. We are like magpies, picking up whatever we see and bringing it back to the nest, and we wind up with homes that overflow with what we like to think are possessions, but are often...just junk!
Collapse