I felt really bad when

charleshaynes rather suddenly pulled up their stuff and left Bangalore; I was, of course, able to keep in touch with them through their LJ's, but when I realized they were going to be back in Bangalore for a few days, I was very keen to go and meet them. So there was also

themadman and Aadisht , whose LJ username I just cannot remember, even though I had no alcohol...but that's OK, since he seems far more active on Blogger. I also met Biju , and exchanged notes with Vidya .

Conversation started with, and kept touching on, the Bhut Jolokia , which Gautam had brought from a friend's restaurant, in pounded/ground form. The smell of it (not too close with those nostrils!) when the little dabba was opened was heavenly; and Charles added it, a teeny bit at a time, to a small glass of vodka, and the experiment was, probably, to see at what point of time steam appeared out of the taster's ears... Charles had also brought along some Red Savina habanero pepper ,but this was cut down and "tempered" with onions and ground.

I wonder if there are specific names for all the chilis I scoop up in the local market? I am sure,but there is no consistency in what I get and I settle for the what I can get. In general, the rule seems to be "the smaller, the deadlier"....I wonder if anyone can throw light on these chillies.

And while talking to Aadisht, I did wish, once again,that I had been on the Bangalore Photowalk , which I missed, alas, due to the Bandipur trip...seems to have been a great outing. Good going,

skthewimp...am going to join you next time.

The economics of running a restaurant, and pricing dishes, were also talked about, and Madhu convincingly proved that Darshinis operate on a higher profit margin than he does, appearances to the contrary!

There was also a conversation on age, and feeling old. As, easily, the oldest person present, the only point I made was that if one's health was good, age was indeed in the mind. But it tickles me that age is always with a negative connotation, and as one who can say so with authority, that is not true unless one suffers from ossification of either body or mind. Every age that I have passed through has had its difficulties and compensations, and I would not exchange each for anything. But I guess, different strokes for different folks...but was I really so afraid of getting older as some of those present seemed to be? I think not...


PS. The rice noodles I had were really excellent. Though it may be causing Madhu a lot of effort, I am happy that Shiok is moving *somewhat* closer....

Is it to ward off any "evil eye"? Doesn't seem likely, either...has the KSRTC confiscated a ghatam from a Carnatic musician and put it up there as a lesson to him?

Well, since That Mammal is still grimly determined that I will never see its visage (or even a twitch of its tail), let me share all the other wonderful sights of Bandipur.... Here are some of the birds (all pretty common, no Darwinian discoveries here!) that I saw.


Very common at this time of the year is the BLACK-RUMPED FLAMEBACK WOODPECKER (Dinopium benghalense...dunno why it's called "Din-OPIUM"!!), which can be seen flying about, and boring the tree-trunks (you can see a small piece falling to the ground from its work, if you look carefully!) 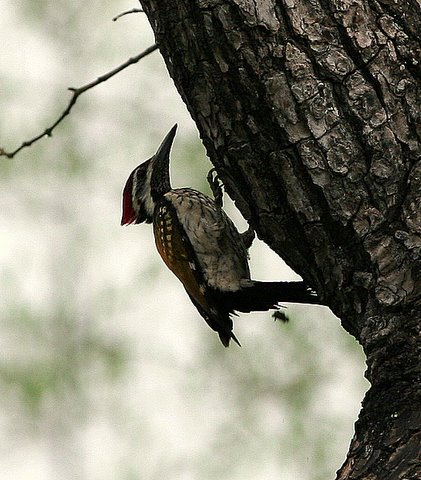 Also fairly easy to sight were the CRESTED SERPENT EAGLEs; this one was sitting not too far away for a brief while: 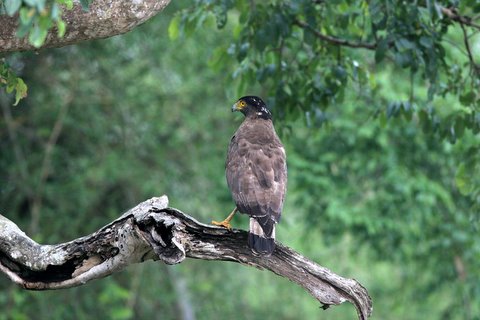 
We did see several other birds, but these were the photographs I got! As always, the mammal sightings were great too, but that's going to be another post....
Collapse