Got some very nice aerial photographs (

asakiyume...sunrise and sunset both!) and had extremely interesting travelling companions...between St.L and Atlanta, I sat with a lady who's a lawyer at Boeing...but was thrilled with the guy sitting next to her...because he told us he's a high-wire artist...and after talking to him about it, he told me many members of his family were in the profession, too...and I said, "Oh, you are like the

He was Alessandro Wallenda, Alex for short...he was visiting his girlfriend in St.Louis.Wow, it was a thrill to meet a seventh-generation performer from this world-famous family!

Here are Alex and Chevon, the Boeing lawyer, against the glare in the aircraft: 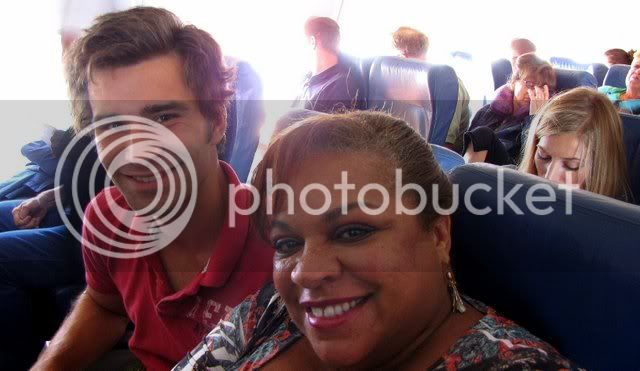 On the Atlanta-Paris leg, I sat next to a mother and son, who had immigrated to the US from Bulgaria....I cannot express the incredible sweetness of character of these two people...I actually felt that I would like to take them home with me....what an uncomplicated genuine-ness and ...I have to use the word again...sweetness of temperament! Oh, why can we all not be such human beings! It was a joy talking to them and being with them.

This leg was on a Boeing 747-400 where the old First Class section had been converted to economy...so the seats were quite roomy, and the difference it makes to one's comfort is immense!

So, to compensate...the Paris to Bangalore leg was simply AWFUL. A 9-hour flight...with a broken seat, broken video, the staff strung me along with promises of repair for six hours until I started yelling, then put me in a bulkhead set next to three-month-old twins who were bawling so hard I had to hold one of them instead of watching the movie...lousy, lousy food and bad service (meal clearing took 2.5 solid hours, and several of my neighbours didn't get meals for a very long time.)..YEUGGH...am dead tired, with dead being the operative word.


OK, it's DREADFULLY late, and I must try and beat jet lag, and catch up on some sleep before I begin to catch up on the ZILLIONS of jobs that await me (starting with repairing my glasses, which KTB threw on the pavement the day before I left, and shattered.)

EVERY child crying on the aircraft or in the airport was my darling KTB crying. It felt good to hold the 3-month-old infant for a while....
Collapse