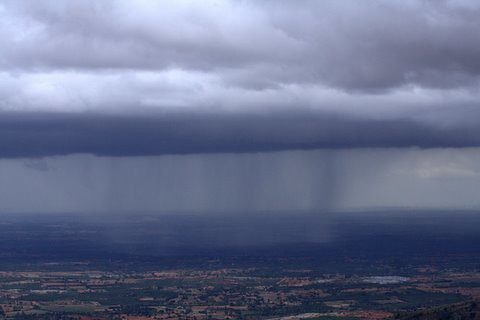 
The clouds gather, and darken.
Heavy, bearing water, they scud along.
Low-hanging, in cottony shreds,
Higher up, boiling, as if
The water in them were
Hot, instead of icy cold.
The breeze stiffens, too.
Coolness, welcome after the heat,
Pervades the very air.
The trees sway in the rising wind,
And that eerie light, that presages a storm
Makes the whole scene glow.
Lightning forks down...majestic, awe-inspiring.
The thunder follows, scary claps, or distant rumbles.
The first big, fat, drops fall
And dry at once, on the hot footpath.
But more and more follow,
Until it's a stream of water
Falling from the sky.
It sounds trite and traditional,
But the hearts of sundered lovers
Yearn to be together again.
Children, on the other hand,
Hold on to their parents
And try to swallow their fear
Of the elemental forces.
The monsoon's begun...the wonderful, unique
"Smell-of-the-earth", that comes with the first touch
Of rainwater, on the parched earth,
Raises emotions in our hearts,
Even as beasts and birds
Scurry for shelter, or stand patiently,
Drenched in the sustained downpour
With which Nature renews her annual promise
To her sister, the Earth.
Collapse