I got an email from

that he and his girlfriend Sarah (both postdocs in bird behavior) would be birding in Forest Park in the evening, and I decided to postpone my visit to a birthday party to join them for at least a short while.

As I walked to meet them, I was witness to an altercation (or at the very least, a noisy interaction) between two 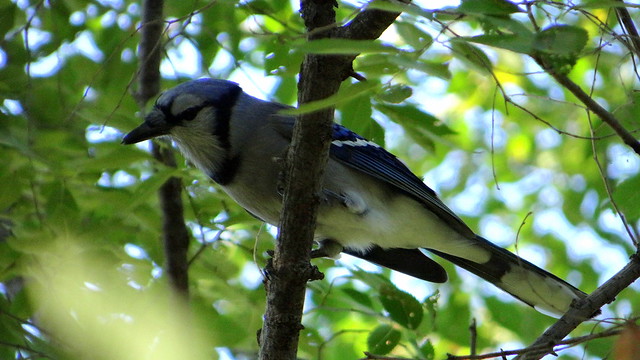 in a tree, which I have posted about

After I met them 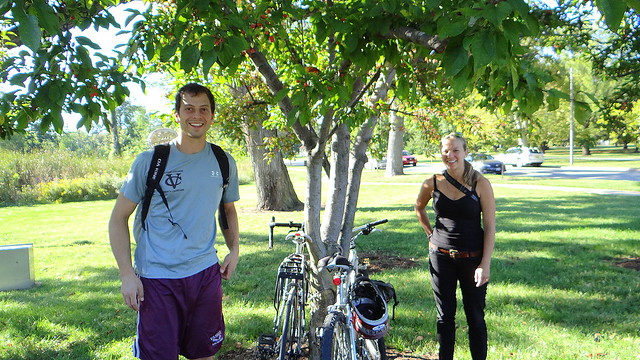 we walked down the path in the prairie area of the park: 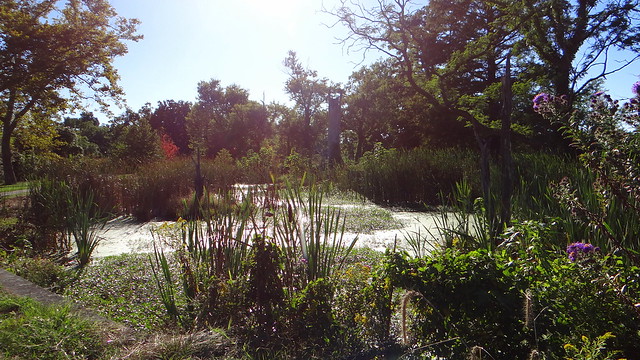 Though the sun was still high, there was a fair amount of bird activity in the area. We watched several 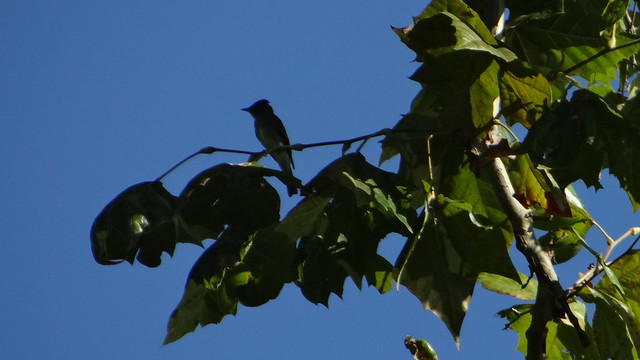 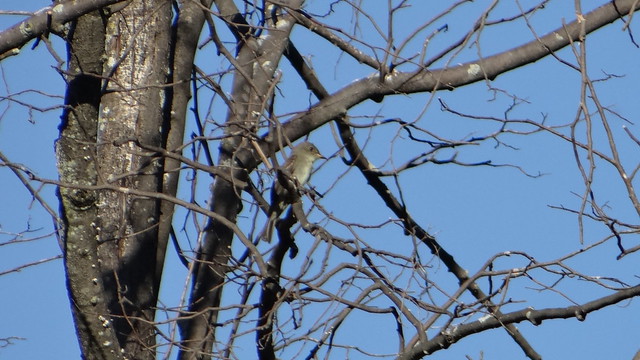 We also saw Rose-breasted Grosbeaks, Indigo Buntings, Thrashers, and Vireos in the heavy foliage across the creek. The foliage was too thick for photography, so I used my binoculars instead.

The change in the season was quite palpable, and the the first of the fall colours were showing themselves: 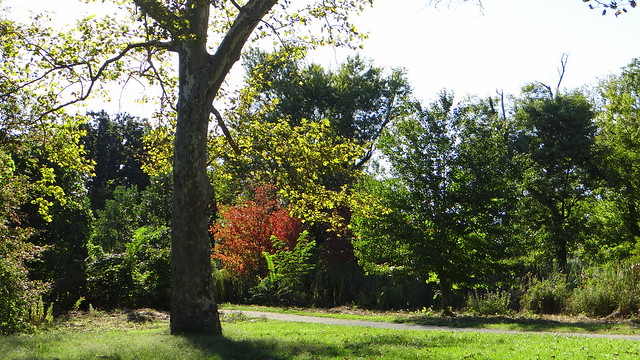 Other creatures, which are more "ground-bound", were making their homes (and arrangements for getting dinner): 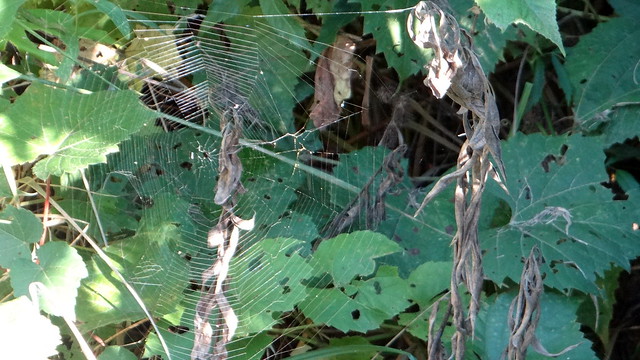 We didn't see any Mississippi Kites, but we certainly saw this Missouri Kite up a tree! 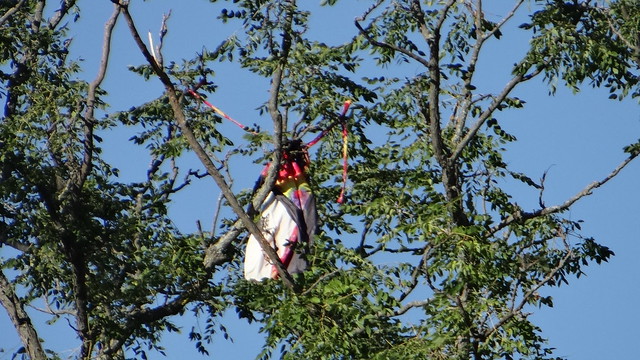 delighted us with their flashes of yellow: 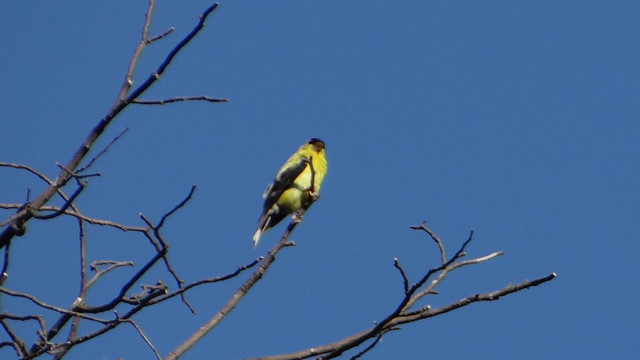 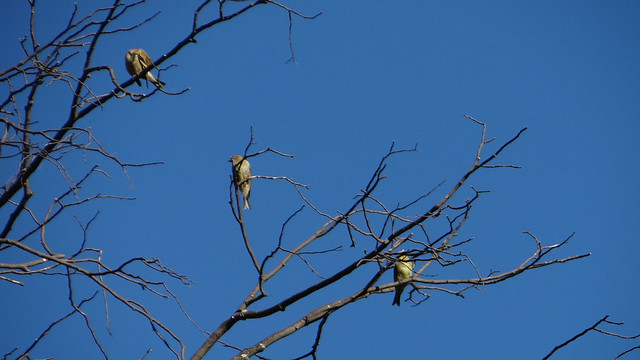 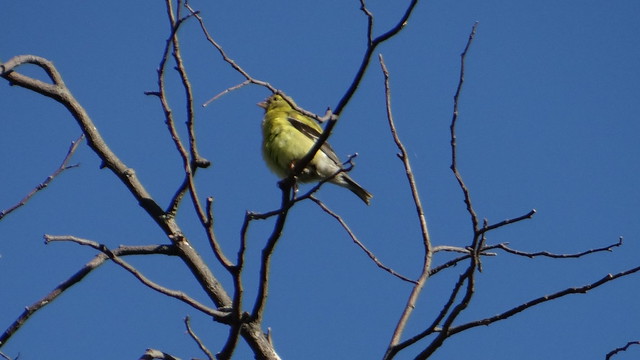 I call this image "flying south" in salute to the millions of birds who do that.. 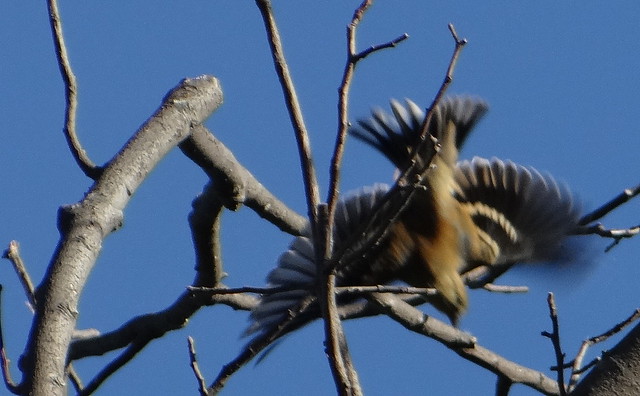 Butterfly, one of thousands on their annual journey, was feeding off the New England Asters (Thank you, Lynda Richards, for the id!) : 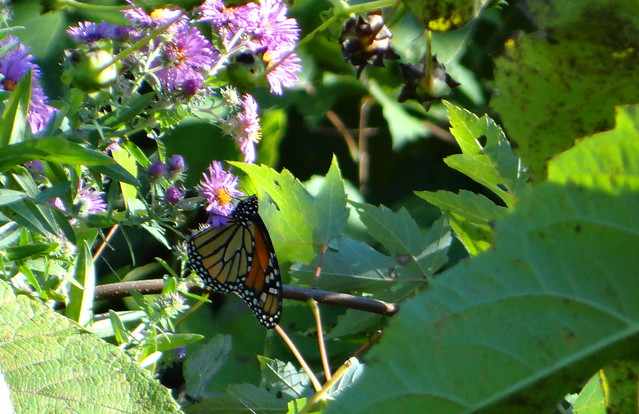 The Goldenrods and the white wildflowers (Lynda Richards helped me...they are Pilose Asters) spangled our path with yellow and white: 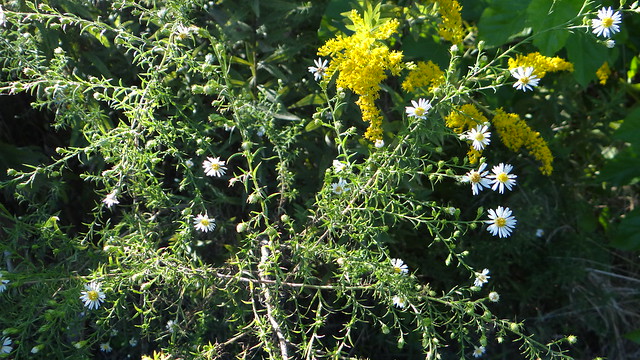 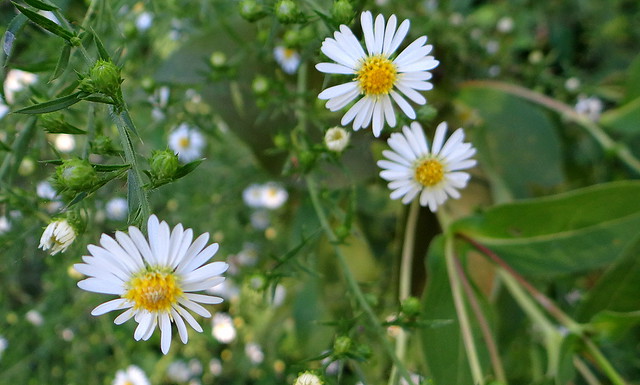 These seed-pods were setting post-flowering and they were beautiful, too: 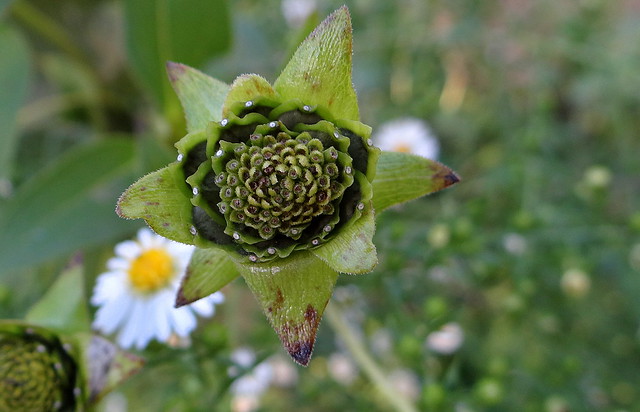 I thought I saw a raptor, but doubted my sighting when I spotted a 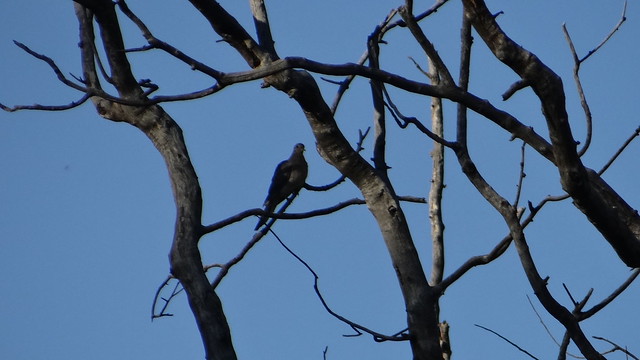 But no, my sighting was all right...the

too, had landed on the same tree! 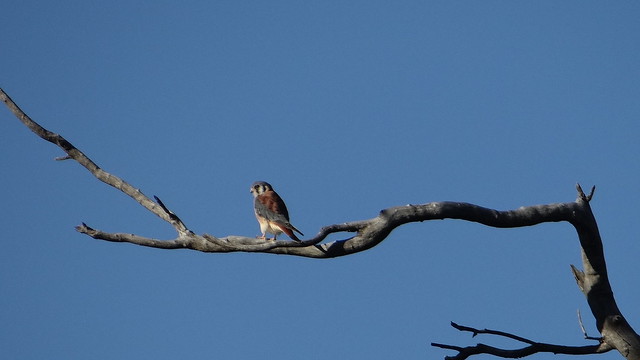 An interesting thing happened at the start of our walk. Another couple came along, and asked where they could see the Great Horned Owls, and I told them that they'd have to head over to the Muny. Then, when I mentioned that I was from India, the gentleman immediately said, "Mohan?"...he was

an eminent lawyer who is also a keen musician, and is a birder as well!

Apparently he'd read my posts on the Mobirds list (and no doubt had a hearty laugh over my mistakes, though he was too polite to say so!) Here are Eliot and Mark: 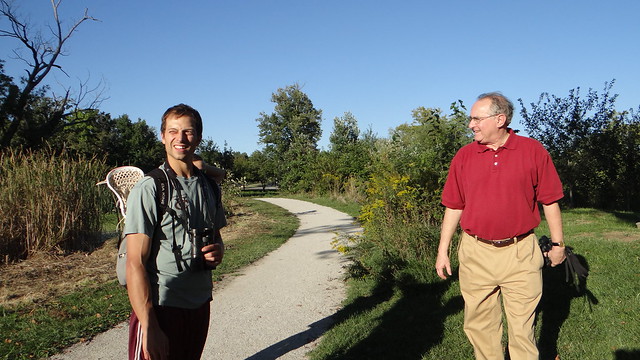 We all watched a 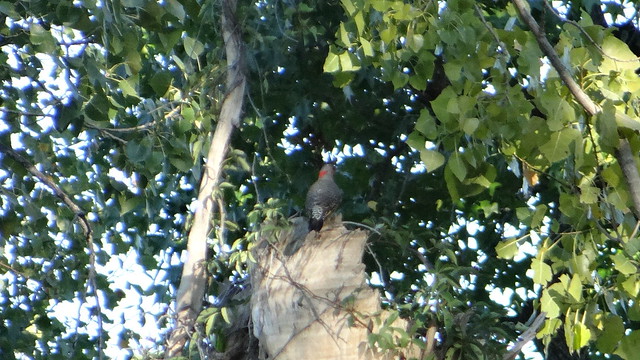 I wasn't sure if there was a nest, or it was just foraging for insects in the wood of the tree-trunk. 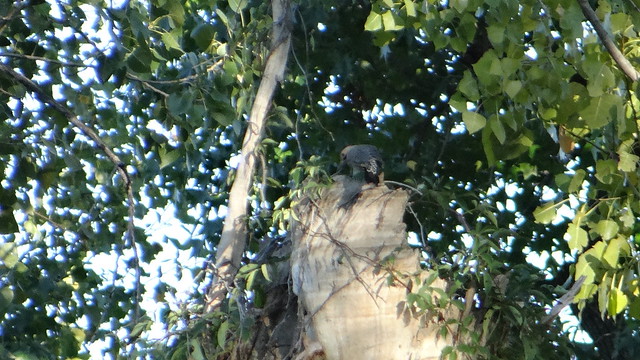 Alas, I had to leave in order to catch my train and go to Creve Coeur, so I bid adieu to Eliot and Sarah, and walked back through the Park, seeing several other people who were enjoying the beauty of the evening: 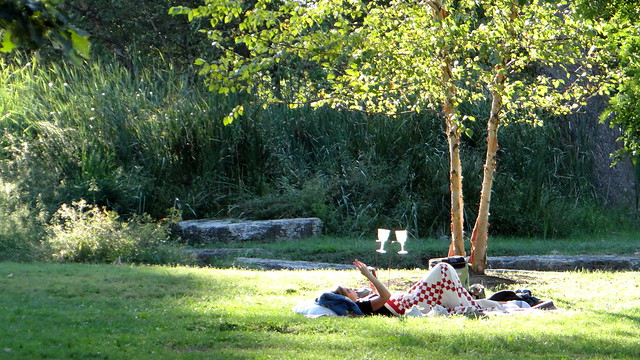 Forest Park will always be a great treasure house for me... 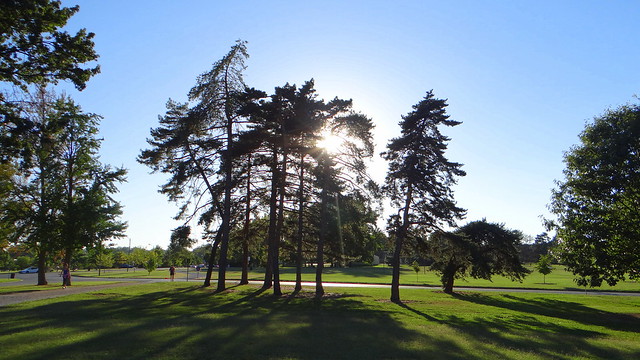 The bird-list sent by Eliot (thank you!) contains species that Eliot and Sarah saw after I left, too. I've marked "my" birds with an asterisk:

Do not be put off by any short-and-terse comments I am making on your LJ post.

Today, suddenly, I am able to not only access friends' pages but also comment on them, and reply to comments on my own posts.

But not knowing how long it will last (yes, the acess is already gone, that's why I am posting this), I simply rush to make a one-word comment and then go on to the next friend's page or the friend's next page....so please forgive the brevity!

pondhopper, I was in the middle of one of your posts when access shut off :)
Collapse