For several years now, I have taken Air France flights, and in that time, their service has deteriorated very sharply.

Let me explain why I am stuck with Air France. They are code-share partners with Delta. I have come to the point where, if I make one more trip to the US with Delta, I will get enough mileage for a return ticket. So...this time, too, I travelled AF for the Atlanta-Paris, Paris-Bangalore sector. I didn't have the horrific experience that

t describes...but the service was atrocious, AF made their daily flight to Bangalore an alternate-days flight only without informing me. We found, when we went to the airport on Sun, Oct 27, that they had scheduled a 26-hour layover in Paris for me! Luckily, a 1.5 hour negotiation by my daughter, with the counter staff got me a reprieve, and I left St.Louis a day later, cutting my transit time in Paris down to 2 hours. Else, I too would be writing a blogpost like the one above!

The food was atrocious, the hot drinks tepid, the stewardesses VERY unhelpful,

As my flight was re-scheduled, the seats that I had reserved so carefully, well in advance, were all cancelled. I was told I would not even know what seat I'd got until I got to the departure gate, and naturally, I was allocated the worst possible seat on the aircraft on each leg. (middle seat on the wing in one, window seat on the wing on the next.) There were a couple of vacant seats but the stewardess and unhelpful fellow-passengers would not let me change. She was not inclined to listen at all. I was speaking in English, asking for another seat, and she kept telling me, "I don't understand what you are saying!" Thankfully, a young girl took my middle seat on the Atlanta-Paris leg, and let me have the aisle seat so that I could at least get out and stretch my legs once in a while. I cocooned myself into the window seat on the Paris-Bangalore leg and watched movies.... I strongly recommend "The Heat" (English, starring,Sandra Bullock) and Jolly, LLB (Hindi, starring Arshad Warsi)...! Climbing out from the deteritus of a long flight...blankets, cutlery, headphones...across two other seats, to get to the toilet, is a feat of agility I am glad I am still able to perform.

The resultant tiredness and jet lag are with me now, more than 36 hours after I landed, half-dead, in Bangalore. I was so disoriented that I left the liquor and chocs that I bought in Bangalore duty-free, in the cab....I know that the cabbie is going to have a great Deepavali.

I strongly recommend everyone never to travel Air France! It seems to me that the stewardesses scorn all Economy Class passengers, and do their jobs as reluctantly as they can get away with. The ground staff are never available, either, it would be better to call them "underground" staff!

What to do when stuck into a window seat on an airplane? Take photos...these are views of St.Louis, Atlanta, Paris, dusk, passing-over-Iran at night... 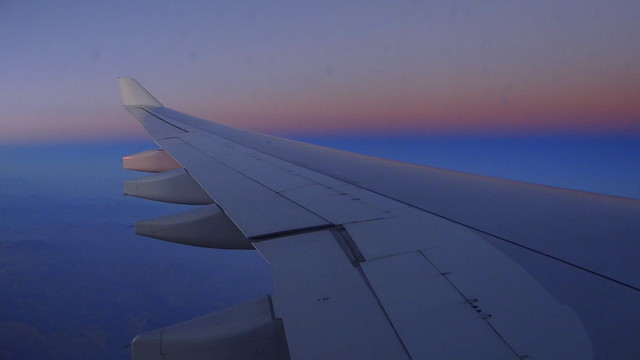 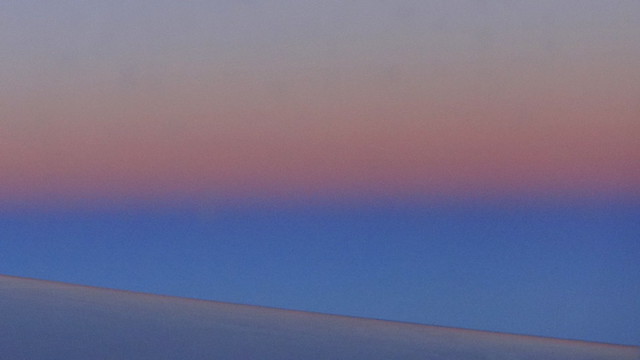 Journeys are said to end in lovers' meetings, but sometimes they are difficult partings, too. 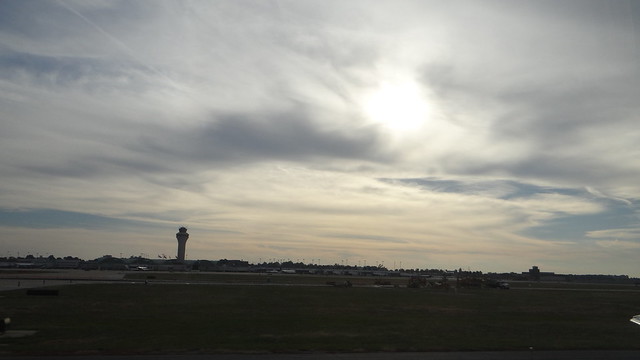 Jet-lagged, and headachy, and trying to cheer myself up!
Collapse