On my visit to Manipal, Karnataka, walking in the Saralabettu area while participating in the Bird Day, I saw this scene: 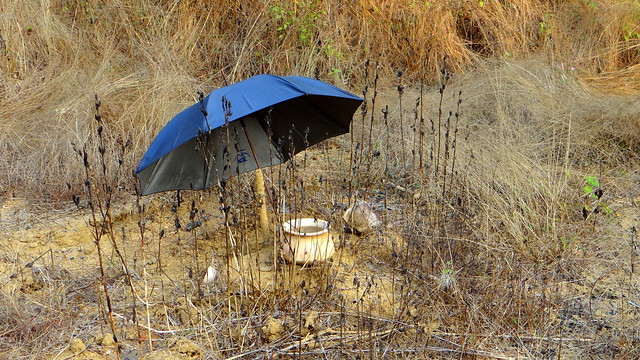 That intrigued me, and I enquired of my fellow birders if they knew the significance of the open umbrella and the pot.

One of them explained to me that when someone of the area died, they were buried, and the pot and open umbrella were left to feed the departed, and shelter him from the elements, respectively.

Such burial customs reminded me of the

that I have often found in the Bannerghatta forest, especially in the Ragihalli sheet rock area.

A dolmen, according to the Wiki, is also known as a portal tomb, portal grave, or quoit. It is a type of single-chamber megalithic tomb, usually consisting of three or more upright stones supporting a large flat horizontal capstone (table), although there are also more complex variants. Most date from the early Neolithic period (4000 to 3000 BC). Dolmens were usually covered with earth or smaller stones to form a barrow, though in many cases that covering has weathered away, leaving only the stone "skeleton" of the burial mound intact.

Here's the picture of one that I took in Ragihalli sheet rock area, 261113:

One common thread running through many burial customs seems to be an unwillingness to accept that what is left is only the body; there seems to be an attempt made to ease the person's path even in the afterlife. The most famous examples of this are the tombs of Pharaohs in ancient Egypt, where all manner of items were interred with the mummy.

is an account of Egyptian burial customs, with a detailed description of "funeral goods".

Well, our friend in this field was no Pharaoh, so he has to be content with an umbrella, a pot, a stirrer and some small items. 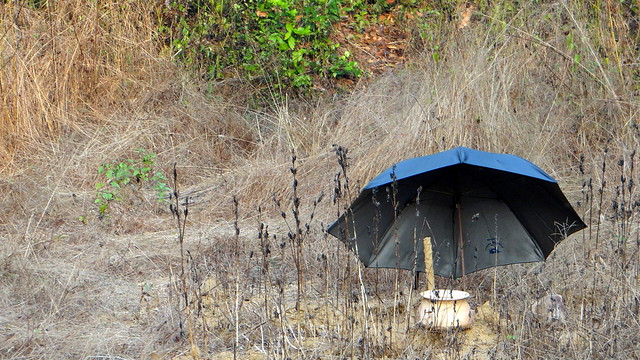