in 2014, when we attended a wildlife volunteer training program together. Even then, in the beautiful environs of Kudremukh,Karnataka, I always found him with a sketchpad and a pencil in his hands.

Since then, his artwork, especially on the theme of wildlife, has become quite well known. He is not afraid of using the most difficult and unforgiving of art media, such as Indian ink (lampblack collected in a container and mixed with grease, and applied carefully to paper.) He is now an artist whose work finds homes across the world.

However, Prasad decided to step beyond displaying his own talent; in March 2017, he conceived the idea of mounting an exhibition and competion of wildlife art. In a city which has many wildlife events, including wildlife photography, this w the first such exhibition; indeed, it is probably the first such competition-cum-exhibition in the country. Artists from all over the country, and abroad, sent in their work to be exhibited. The event finally came to fruition and was held at the Venkatappa Art Gallery in Bangalore, from January 28th to February 2nd, 2018....almost a year of hard and unremitting work.

Mounting such an exhibition was not easy. Prasad first reached out to the fraternity of wildlife artists, asking if they would like to show their work. Several artists responded, and after he shortlisted the participants, sent him their pieces, which he stored in his own home, taking the utmost care of them. "The artists sent me their works in all kinds of frames and sizes," he smiles reminiscently. "Transporting them to the gallery, and back, was one of the major logistics hurdles. We hired a mini truck for all non-glass-framed artwork, and a car for all pieces with frames. Most of the art works were taken back by the artists at the gallery, but the remaining pieces, which are from outside Bangalore, will be couriered back to the artists."

Did he have anyone to help in all this? Prasad points gratefully to Sree Latha P., an artist whom he met at several art events. She volunteered to help, designing the brochure, and cheerfully working on the many details that cropped up. "Certainly," he says, "Next year, I cannot increase her burden; I am going to need more volunteers to help me!"

23 artists participated, with Prasad curating the work to be displayed. In a show of solidarity, 18 of them were present at the show opening. Prasad named the event "Artists for Wildlife and Nature, Annual Wildlife Art Show" (AWN for short).

Here are the artists from Bangalore who participated: 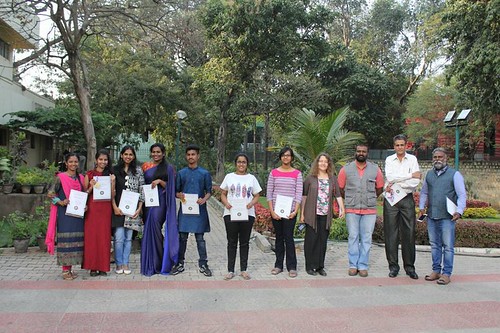 He invited Hemlata Pradhan to judge the art and prizes were awarded as follows:

Here are some of the awardees: 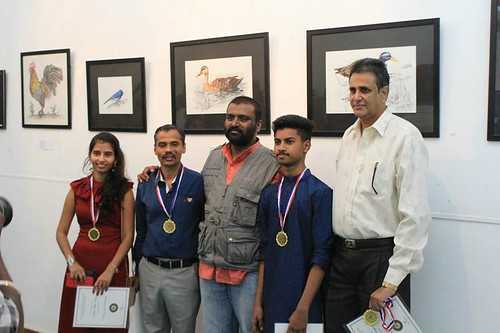 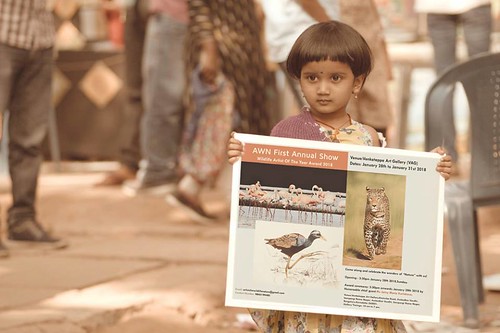 The pictures displayed covered a remarkable variety of media used. A few sculptures by Eric Ramanujam were also part of the show.

Jainy Kuriakose, the Chief Guest (who is a superb photographer, and has travelled extensively to document the rarest of birds), gives away the prize to Sweta Desai: 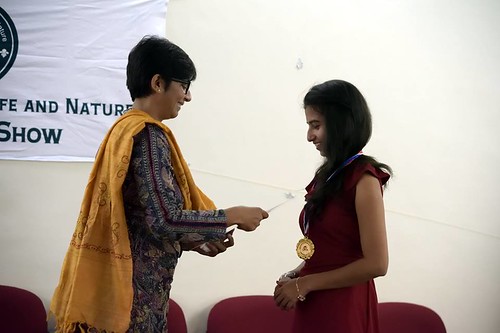 Sweta, and her father, who are from Goa, as well as artists like Prahlad Hegde, wore delighted smiles at the exposure their art was getting, with over 600 people visiting the exhibition over the four days.

Prasad, having put together the show successfully, welcomed the gathering at the opening: 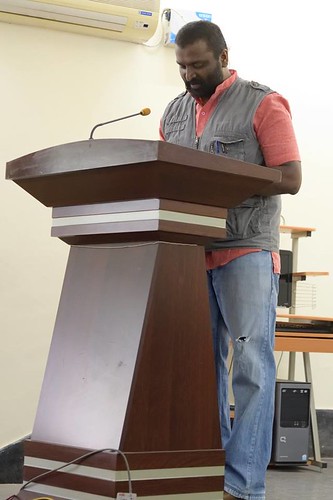 A large gathering of luminaries from both wildlife and art circles attended the event. Nearly Rs.55,000 was recorded in sales. For artists who are looking for their first commercial break, this was heartening indeed.

However, though the rates charged by Venkatappa Art Gallery are extremely reasonable, Prasad sounds a note of warning about the booking process. " We officially booked the gallery two months before the show,", he says. "But what I did not notice was that the dates need to be entered six months prior to the show in the gallery register. This was a pencil entry by the person in charge of the gallery. When I went to make the final arrangements, I found that the last date (2nd Feb) had been erased, and the gallery rented out to someone else." Since even ink-entries might be erased by a whitener, it might be better to take a photo of the register entry on one's mobile phone, and keep that as proof of the dates the gallery has been booked for.

To see images of and by the artists, and guests who visited the exhbition, you can see Prasad's FaceBook album of the event,