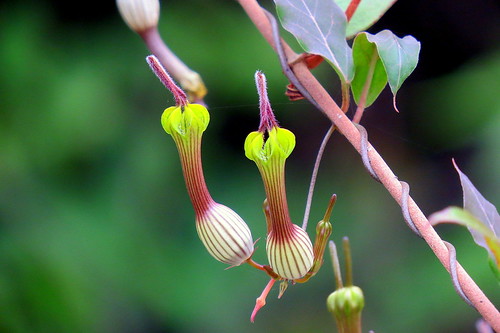 
We have all heard of carnivorous plants like the Venus Flytrap, that trap and devour insects. But less known is the fact that some plants of the Ceropegia species, actually deceive and entrap insects, for pollination!

Here's how the Ceropegia flowers work, and it's quite complicated.

Spiders and other insect predators often trap and eat honeybees, and there are some flies that love to eat these honeybees, too. The flies are able to smell the scent of the dying honeybees, and congregate to feed off the bees even as the predators are eating them. Since they are, in this sense, robbing the predators, they are called "kleptoparasites"

Ceropegias take advantage of this liking of the flies. They produce a fragrance that is remarkably similar to the "alarm pheromones" (the mixture of about 33 substances emitted from the glands of the bees under attack). This fools the flies into entering the flowers...and they find themselves falling into the flowers, to the pollen chamber (the pot-shaped area at the bottom of the flower).

Now, the flies, notorious thieves themselves, find that they have been doubly deceived. Not only are there no flies to eat, but also, there is no nectar in the pollen chamber of the flowers, to reward them. The Ceropegias are known as "deceptive flowers," allowing themselves to be pollinated by the insects they attract without rewarding them with food. 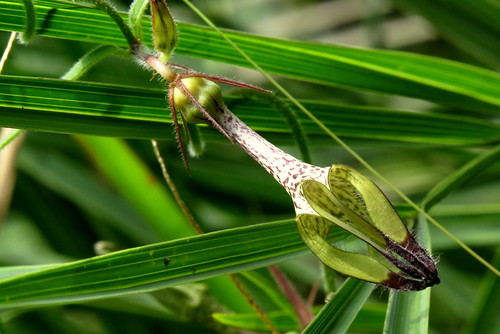 In addition to this trick, there is also the ensuing imprisonment, as the plants trap the flies in their flowers for around 24 hours. This ensures that the flies -- searching for both food and a way out -- do all the work when it comes to pollination. As a result of this activity combined with food deprivation, the flies are quite weak when they are finally allowed to fly away. As hungry as they are, they are magically drawn to the alluring, deceptive scent of neighbouring flowers, where they end up back at square one.

The deceit of the Ceropegias was discovered by Annemarie Heiduk, a doctoral researcher in biology at the University of Bayreuth. Scientists from Bayreuth, Salzburg, Bielefeld, Darmstadt, London, and Pietermaritzburg helped her gather the evidence. The international team has now presented its research findings in the latest issue of the journal Current Biology.

You can read in more detail about this fascinating process,

But the plant itself is sometimes subject to being eaten by the caterpillars of butterflies and moths. Here a Plain Tiger caterpillar on the flower of one Ceropegia: 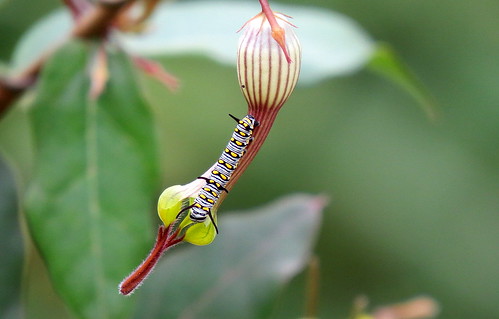 Here is a photo that I took of a true carnivorous plant, called the Sundew flower, which digests the insects caught in the sticky "dew" of its flowers. 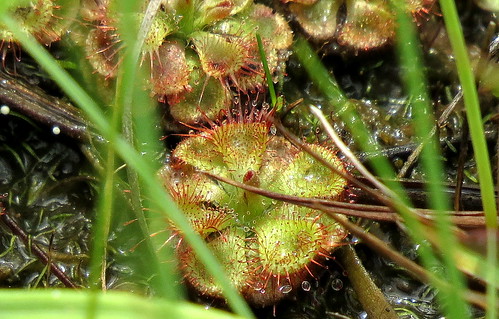 Just another example of the wonders of the world we live in!

Since all of us are becoming so polarized by caste these days, I thought I would take a tongue-in-cheek look at the four varnas, or castes, into which I can categorize the living beings around us. No offence meant, this is a light-hearted classification, intended to drive home the point that dividing ourselves by "caste" is not a good thing to do!

The Brahmins of the "upper caste" is easily represented as there are several creatures with the word in their name. Here is the Brahminy Kite: 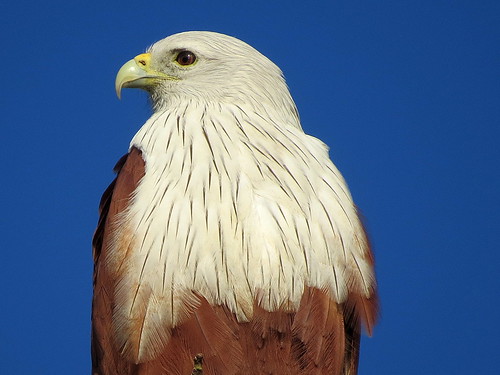 See the beauty of the Brahminy Skink: 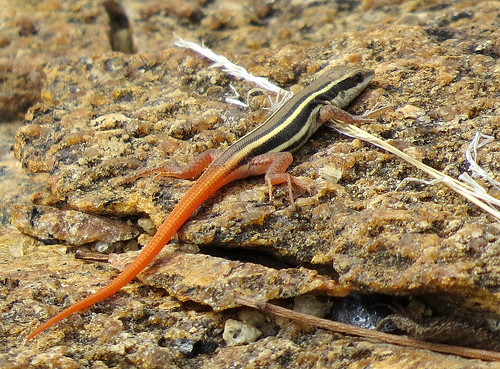 There is also the Brahminy Myna with its very "brahminical" tuft on the head! 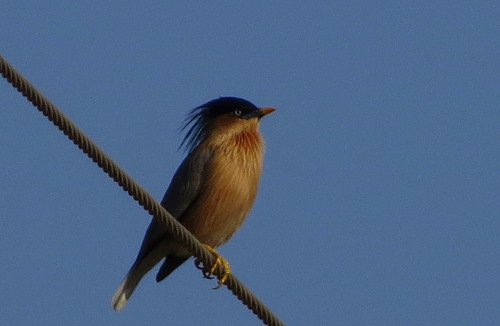 Kshatriyas or Warriors: I am reminded of fierce warriors when I see ferocious predators such as the Dragonfly, which pounces on its prey and munches it up. 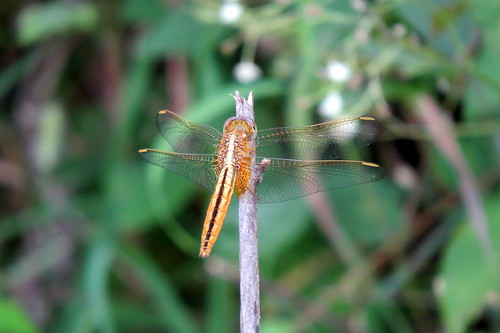 Here is the Common Picture-wing, another kind of Dragonfly: 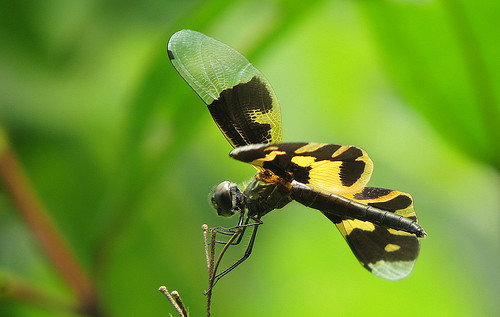 Some of these predators are aptly named. Here is the Robberfly: 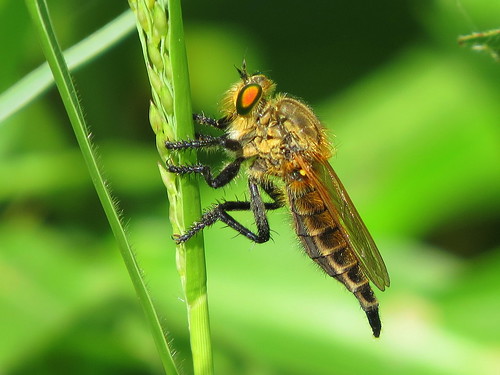 Another warrior is this Spider Wasp, seen here stunning and dragging a Yellow-thighed Tarantula to her nest, where she will deposit the paralyzed spider, and lay her eggs, ensuring fresh meat for the newly-hatched eggs. She will never see her children, but takes so much trouble for their future. 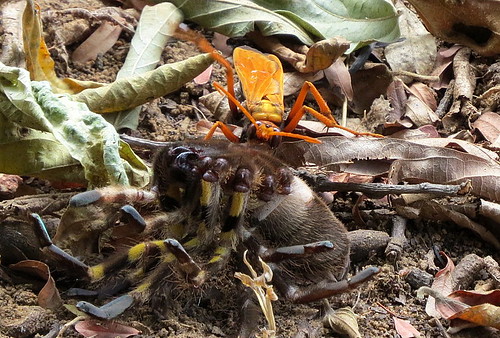 Vysyas or Traders: Several plants have a "trade" arrangement with insects, and one of the most interesting of them are the Ceropegias, which trap the insect inside the flower when it enters for nectar, and releases it after it is coated with pollen dust ensuring pollination. 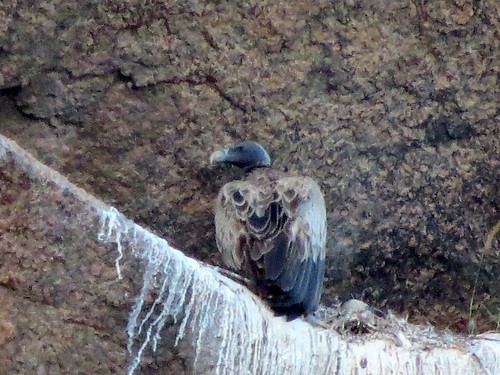 Here is the scavenger, majestic in flight: 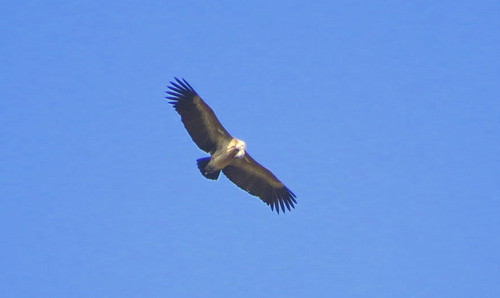 Dung Beetle. In Nature, there is no "s*it"...everything is a nutrient, and the creatures who use it are many! This beetle rolls the dung along with her back legs into a suitable hole in the ground, and then lays her eggs on it, so that there is enough nutrition for the newly-hatched larvae. 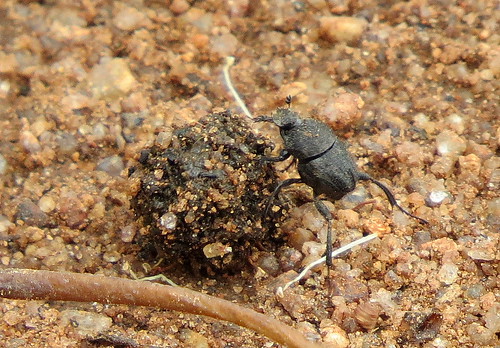 Blister Beetle, the Untouchable...because touching it causes it to extrude a secretion that causes blisters on our skin. 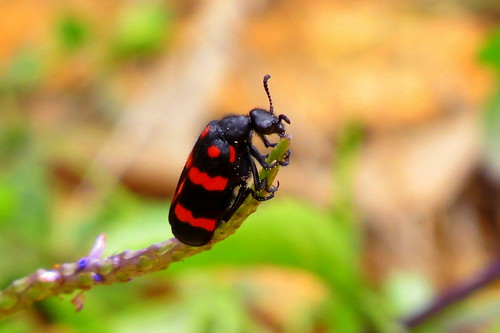 So, if we like, we can drag casteism into the rest of the animal kingdom, too! But I'm hoping we will all realize that our wildlife is not "varna, bu "suvarna" or gold...a treasure that we must protect and cherish.
Collapse