Many of us who use eBird have observed the past four days (15, 16, 17 and 18 Feb, '19) for two bird-counts: the Great Backyard Bird Count (GBBC) and the Campus Bird Count, both of which took place all over the world.

Experts like Suhel and Praveen can give you a very good overall picture of how these two counts went, all over India; at my (amateur) level, I can confidently say that the three southern States of Karnataka, Kerala, and Tamil Nadu have had a lot of birders uploading lists from various spots and campuses. The most remote spot I've seen a bird list being uploaded from is Mizoram, in the north-east.

The campus I'd chosen to conduct a bird count at, for the past few years, is that of the Indian Institute of Management, Bangalore, on Bannerghatta Road. 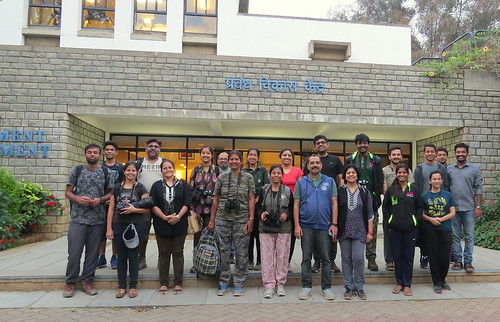 After a terror attack several years ago, the campus had been closed to visitors other than those who had business or educational appointments. I would like to credit Prof. Shainesh of IIMB, who is a keen birder, along with his wife Leena, for opening the doors to various walks: trees, butterflies...and birds! I would also like to thank Dr Selvarajan Rajeshwaran and Vidhya Sundar, who first introduced me to IIMB, and have kept up both the IIMB and our personal friendships!

This year, the decision was made to let the Environment and Nature Society (ENS) a student organization, to take the major role in organizing the event. On the morning of 17th Feb '19, about a dozen of us, amateur birders, entered the campus, and met Pradeep Kumar, of the ENS, who had passed the word around to students and residents at the campus. Prof. Shainesh and Leena were also there, and I was pleasantly surprised to see some second-year students who, after celebrating their placements in the corporate world, yet found time to wake up early and join the walk. I was equally happy to find some of the faculty, such as Prof. Jayaram Uparna, attending. The acquaintances made during such events are a big plus for me!

We started with the two Coral trees (Palash, Butea monosperma) trees that are now in full bloom. Rose-ringed Parakeets, Brahminy and Chestnut-tailed Starlings, House and Jungle Crows, Purple-rumped Sunbirds and Pale-billed Flowerpeckers, Spotted Doves and the lone swooping Ashy Drongo...they thronged the flowers on the trees, and we spent quite a bit of time watching all of them having a breakfast feast, sprinkling the ground below the trees with fallen flowers as a result. Meanwhile we also recorded several kinds of waterfowl, such as Black-crowned Night Herons, Little and Great Cormorants, flying overhead, heading from one lake to another.

As we moved on, the many trees and the leaf clutter yielded a variety of woodland birds, too. Cinereous Tits, and some warblers appeared. We were able to let the others listen to the calls of the White-cheeked and Coppersmith Barbets, and explain how the Drongos can imitate other bird calls.

One highlight was seeing a Shikra couple bringing in twigs repeatedly, and beginning their nest high up in a tree. 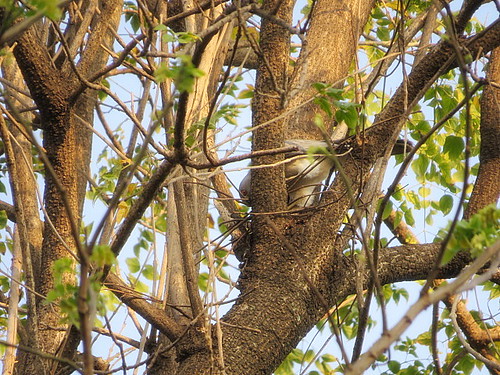 The onlookers could hear the difference between the call of the Shikra and the other common raptors of the Bangalore skies, the Black and the Brahminy Kites. 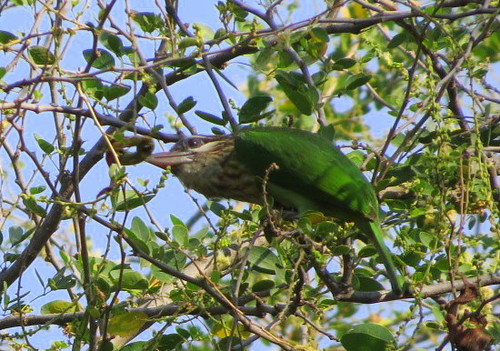 White-cheeked Barbet eating the fruit of the Jungli Jilebi

Almost at the end of the walk, there was an unexpected delight waiting....the white ribbons of the Paradise Flycatcher, as it flitted amongst the mango trees and the faculty quarters, delighting everyone! Praveen caught an Asian Brown Flycatcher on camera, too.

Even though it was a bird count, we could not ignore other living beings. IIMB has greened the campus which was just barren some decades ago; trees like the Jungli Jilebi (https://en.wikipedia.org/wiki/Pithecellobium_dulce) the South American trees like the Golden Trumpet Flower (Tacoma aurea), the Rain Tree (Samanea saman), the Moulmein Rosewood 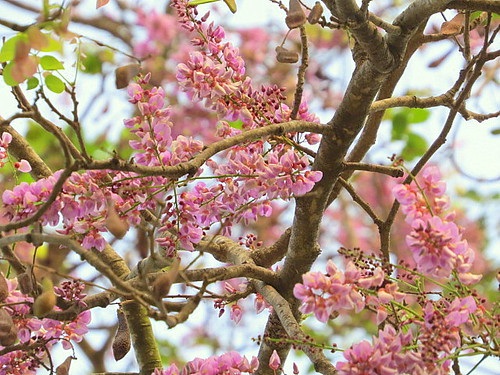 ... which were once upon a time imported, but have "settled down" very well on Indian soil, and our "native" trees like the Neem ( Azadirachta indica), the various kinds of Ficus (including Peepal and Banyan) the Mango (Mangifera indica), and the Silk Cotton (Bombax ceiba) were all noted. A Calabash tree ( Crescentia cujete) had its balloon-like shiny fruits on show. We noted how many birds enjoyed frequenting the Singapore Cherry ( Muntingia calabura).

Six-footers also came in for their share of attention, especially at the flower beds, where several butterflies were nectaring and also sunning. Bees such as the common honey bee (Apis dorsata) and the Blue-banded Bee (Amegilla cingulata, also an "import" from Australia, like the Eucalyptus trees!) were busy with pollen and pollination, and occasionally fell prey to some of the birds. 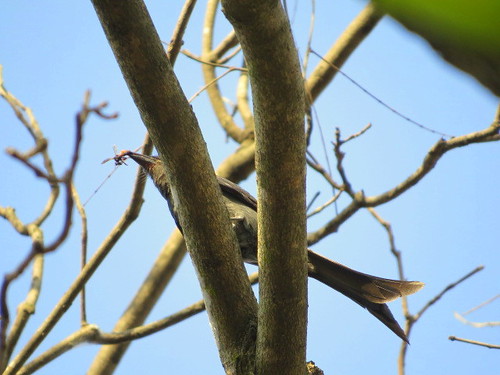 We finally wound up our bird count, after a couple of the participants sighted the resident Spotted Owlets, though we could not see the Barn Owls that are regularly heard. 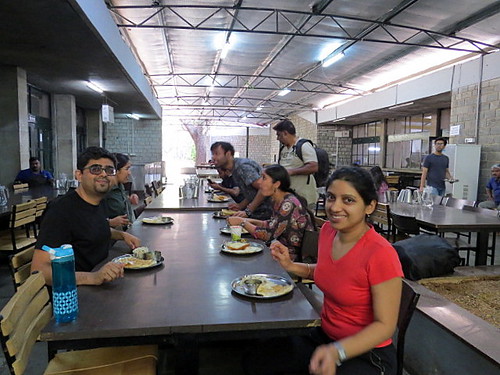 and we dispersed, very happy at having spent a productive morning, and at the same time,being able to contribute some data in the name of citizen science.

We thank IIMB, once again, for the opportunity.The campus is now a green oasis in an increasing-by-the-day concrete jungle, and the two points of view always remain as questions: Would there be more birds in this oasis because of the greenery, or would the fragmentation of the green cover reduce the number of birds? Data that such events help to provide, will give the ornithologists a clearer picture over a period of years.

45+ species in an urban oasis, in the middle of a concrete jungle, where trees are being chopped down daily, is a great count indeed! 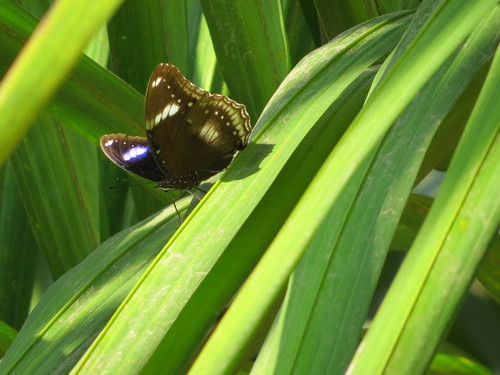 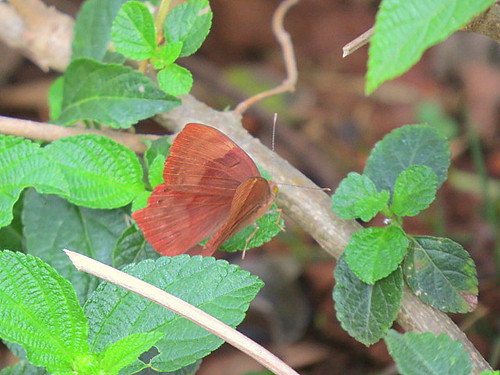 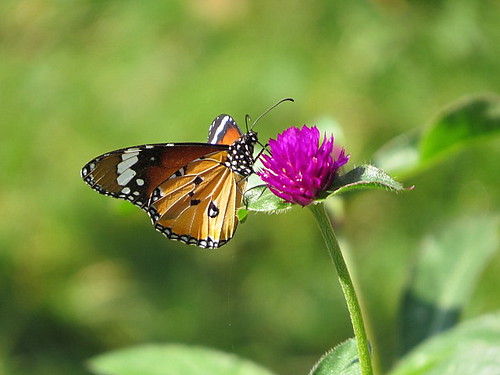 Looking forward to reports from other campuses and 'backyards', 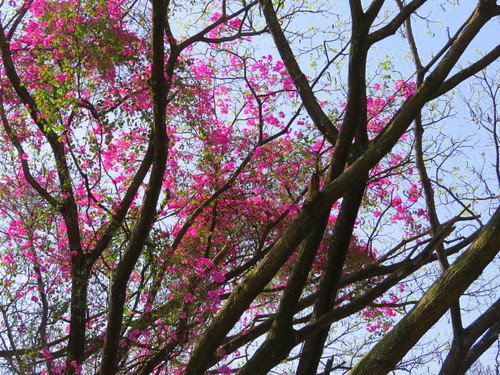