The "Same-Same" theme of the festival. Pic: Deepa Mohan

Language and music classes in the evenings prevented my grandchildren from coming along with me, but when a friend, Harini Srinivasa Rao, told me that she could not utilize her three tickets, I jumped at the chance, and converted my evening walk into an evening, watching "Squirrel Stole My Underpants", staged by

a Boston-based ensemble. It was a show for "children above 4 years", and since I counted myself in, I settled in amongst the full house of children, parents, grandparents and family.

The queue (it was a full house). Pic: Deepa Mohan

The 45-minute performance was carried by Bonnie Duncan, with auburn curls, a printed frock with a gingham apron, with preppy socks and shoes. Two musicians, Brendan Burns & Tony Leva , kept up the tempo and mood of the show on the electronic cello and guitar. These instruments, which were very slim, shaved-down versions of the traditional ones, were as interesting to me as the rest of the show.

The musicians on the left of the stage.

Though the stage setting was very simple -- a clothes stand of two poles with lines! What "Sylive", the main character, brought to the narrative was, like Baa Baa Black Sheep's wool, three bags full of props. She started with putting out a large bedsheet, which served later as the screen for the hand puppets. She then added the laundry, and showed especial happiness when putting out the pink underpants to dry. Almost immediately, the squirrel turned up, and off he went, after several hilarious attempts, with that article of underclothing. As Sylvie chased him, out came a smorgasbord of articles and clothing f from those three bags...including a blue-curtain sea, a bag that she could step into and create a boat out of, a sun, a cloud to hide the sun, and so on....in sunny weather and rain, she chased the naughty squirrel.

Sylvie and her clothesline.

It was delightful to see that both the performer and the squirrel had smaller-size puppets to represent them; reality and fantasy flowed into one another with great ease, in just the way it does in childhood. Several times, the audience applauded spontaneously, cheering on the performer and her narrative.

Some papiermaiche puppets in the foyer.

The two musicians, producing a variety of sounds, evoked different moods and enhanced the production very well. The cello was tuned frequently; I did not know whether it just fell out of tune or the accompanying music required the re-tuning. But it was obvious that the musicians, too, were enjoying the spectacle playing out in front of them! At several points, the audience joined in the rhythm of the music, clapping along.

Three-quarters of an hour slipped by fast, and once the show was done and the performers had taken their bows, Bonnie gave a delightful Mime 101, inviting the entire audience to mime taking a cupful of "the most yucky thing" imaginable, trying to drink it, and spitting it out. The audience, even the adults, followed the instructions gleefully. This involvement caused another round of applause at the end.

The innovative use of props (I never knew that a pair of brown trousers and several green underpants could become a tree!) was a highlight of the show.

Speaking of highlights, the light design also added considerably to the visual appeal of the show. Now bright, now dimmed, they followed Sylvie on her adventure of search. Alas, we were not told who handled the lights!


It was a delightful show, simple without being cloying, and it was very obvious that the children and the children-at-heart enjoyed it very much. I am sure many in the audience would follow Bonnie's suggestion and try their hands at puppetry or mime.

As an aside: Ranga Shankara needs to either update or close down its FaceBook page, which only gives details of the AHA! Festival from 2017.

Small workshops and performances by and for the children also taking place in the foyer area.

This is butterfly season; you must have noticed these beautiful creatures fluttering past you, in the gardens and even on the roads, everywhere in the city. If you observe them carefully, you will find many moments of drama and tension!

One lesser-known fact about butterflies is that they hatch out of the pupa (it's called eclosing) as fully mature adults; something I had to think about and accept, being only used to a progression of living beings from infanthood onwards to adulthood.

Because of this fact, sometimes, male butterflies try to mate with a female as soon as she's emerged from her cocoon; but if the emergence is not complete, or faulty, the romance is doomed. I saw one instance of this at Hoskote Lake, recently. 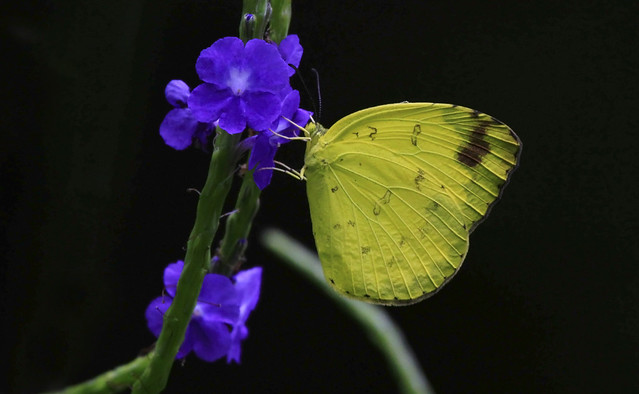 The butterfly I am featuring here is the Three-spot Grass Yellow, a very common butterfly in our gardens and fields. You can see a perfect speciman in the image above, nectaring on a common wildflower called the Devil's Coach Whip (Stachytarpeta species) 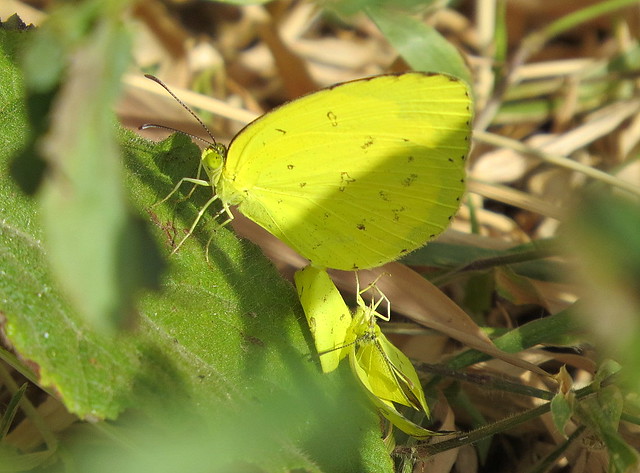 You can see the mating of the large butterfly with a much smaller one here. All butterflies need a period of rest after eclosing, to allow them to dry out their wings carefully, and then fly off to lead their lives. 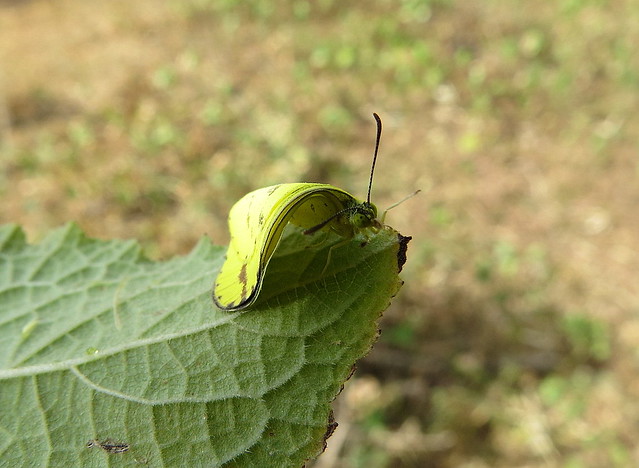 The female, to begin with, was rather small. The male did not, I think, allow her time to let her dry her wings; so they fluttered around, in obvious discomfort, for a bit. Then they separated, and the female, unable to fly with the wings that dried crookedly, fell to the ground. 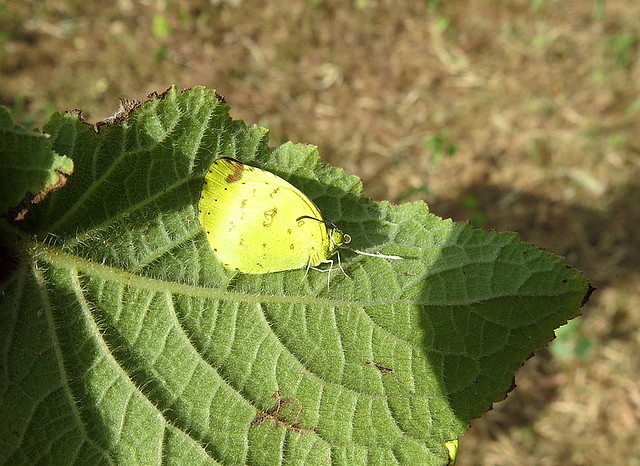 I carefully lifted her on to a leaf; I could not do any more, but had to leave her to her fate. I think her life in the wild would be very short without the ability to fly. This is the ruthless law of the survival of the fittest; if the butterfly is not healthy, it cannot survive and thus produce less than healthy offspring.

It reminded me, sadly, of the many young girls in our cruel world, who are attacked and abused; their wings, too, are broken, and they bear the scars of such incidents forever. Nature is not always kind or beautiful; it takes some effort to accept how relentless life, and death, can be.
Collapse