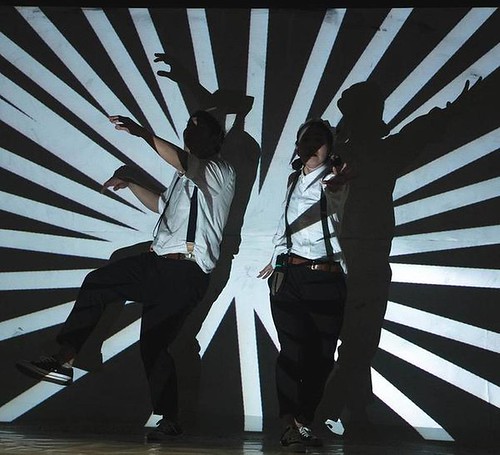 But plays, or to be accurate, performances, like "Woogie Boogie", by Brush Theatre of South Korea, staged on 18th July 2019 at Ranga Shankara as part of the "AHA!" children's international puppet theatre festival, show how any adult can be as entranced as a child. On the child's level, the clowning and the brisk narrative are very entertaining; but on an adult level, one can see the precision of the production, with all the technical aspects of the performance blending seamlessly into a whole. 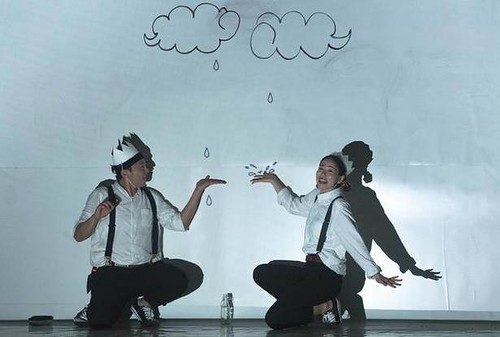 Raindrops fall from the cloud that has been drawn. 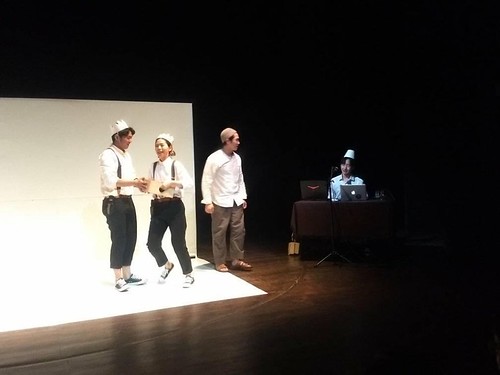 Performers, showing the costumes and the laptops used.


Even as the audience entered the theatre, they found the cast and crew on and off the stage, casually waltzing, playing the piano and thumping on an empty cardboard box. The central, large white screen or board was flanked by two performers ; electronic organist Sung San Hee on one, and another, operating a lot of highly technical software and hardware, on the other. 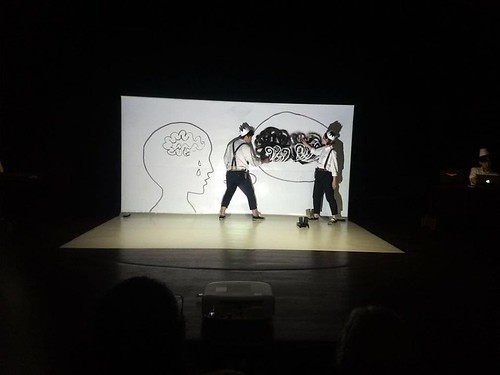 The whole theme of the set and costume design was black and white; the performers wore white shirts, black trousers and suspenders, and paper crowns or cones. The two performers who acted as Woogie and Boogie, drew black pictures on the huge white board, erasing them or transforming them as the play progressed.

As the play began, their cheerful "Hello"s were reciproated by a full-throated response from the children. The two came out with white boards with an "O" outline drawn on them, held in front of their faces. They then ran into the audience, allowing some of the eager children to draw eyes, nose and mouth in the outlines. Back on stage, a body was drawn, and the narrative began to take shape, with Woogie and Boogie first playing with the "on-off/black-white" scenario, with superb and precise lighting being switched on and off.

The two began doodling various things (the children and adults both had great fun guessing what each doodle would turn out to be).But to our amazement, the doodles took on a life of their own! A fish that was drawn started swimming in the sea that the board represented, and a little turtle turned from a drawing into a small puppet. And so it went as the action progressed; a delightful melange of drawing, puppetry, mime, and computer-generated moving images, laced with music and audio side-effects kept the audience enthralled.Soon enough, the actors are out on the stage again — amid squealing children, whiteboards in hand. The children excitedly dart up from the seats to scribble on them — this is precisely what the performance draws focus to. Doodles and scribbles are a child’s favourite companions, especially when a blank space is involved. And most often, stories take form through these careless strokes.

A brain, and the thoughts from that brain.

“It is a multimedia drawing show. We combine hand drawings and projection to make these doodles come alive on this big white board,” says Kim Jae Woong, the video technician in the crew. This was one thing I could appreciate as an adult--the perfect synchronization between the computer graphics and the performer's actions, so that there was no glitch at all in the story. This was truly amazing, as no matter how much they have practised together, it still needs excellent timing to succeed.

Apart from the music, the strange noises the various creatures make when conjured up. were also produced by various instruments or through the voice of the cast. I was able to get only a few names of the crew members from the net: Kim Dong Hyu, Yeom Yonggyun, Lee Seungeun, Song Eyunjae...I was not sure who played what role in the production that evening; I think all six of the crew can do any of the roles if needed.Unfortunately, there was no brochure provided,nor were the cast and crew introduced at the end of the play.

Innumerable creatures and doodles later, a puffer fish slowly grew into an evil creature which wanted to eat up Woogie and Boogie. Finally, the little turtle returned to the sea and swims off to deafening applause from the audience.

The final few moments of the play also transformed the stage from a monochrome black and white to colour, as Woogie and Boogie performed lithe calisthenics against the board. 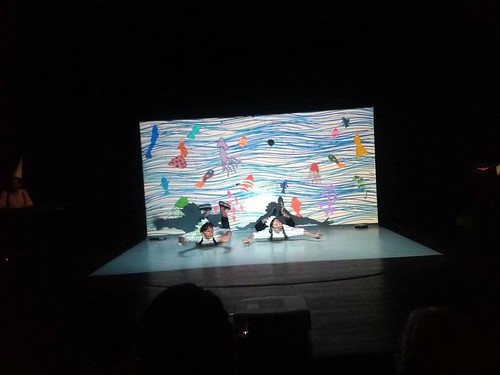 . And, instead of going off to wipe their faces streaming with perspiration from the exertion in the humid weather, they all came to the foyer to interact with the delighted audience once again. 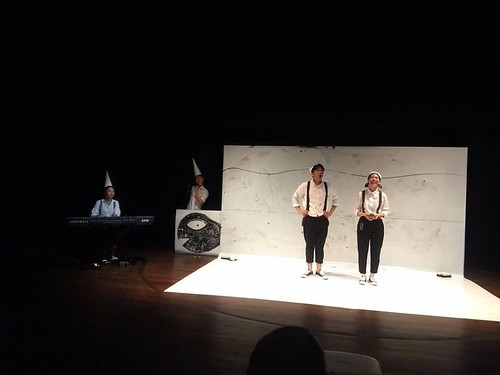 The cast taking a bow, with the electronic organ and the head of the turtle visible.

Such an evening of a performance that delights young and old alike, and has enough for any age group to marvel at and enjoy, is a real treat, and our grateful thanks to Ranga Shankara's AHA! for giving us such an opportunity to enjoy this creativity.

"Woogie Boogie" by Brush Theatre, South Korea
Duration: 50 min.
Cast and crew of 6, I could not get all the names.
Multimedia presentation.
Tickets:Rs.200
July 18, 2019, Ranga Shankara
Collapse