The last couple of occasions I had visited Begur Lake, it was under renovation, and we were a little concerned about how the job would be carried out.

Well, on Saturday the 6th, a few of us 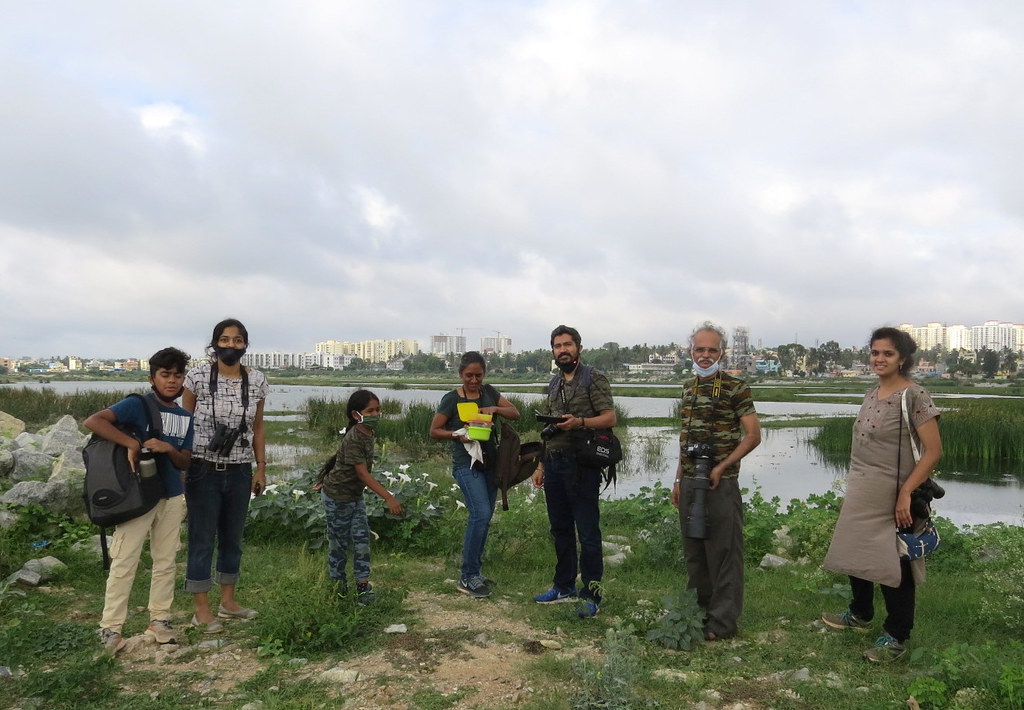 decided to visit the lake, as Dhanapal has been getting such excellent images from there; and we were very happy that we did; the birds (and other living beings) are back at, and in, the lake.

The onset of the monsoon meant that we walked on to the lake bund. Following Dhanapal's directions, we walked along the eastern bund instead of the western one near which the Panchalingeswara temple stands. We found several stands of reeds and almost immediately, our attention was riveted by the variety of birds that we found. Coots, Grebes, Egrets (all sizes), Herons (both the common colours of grey and purple) all went about their business of securing breakfast in their different ways, ducking in the water, or wading along the shoreline.

In a while, we could discern even more activity in the reeds. Streaked Weavers were building their nests, carrying long reed-leaves to one stand and expertly weaving them in; 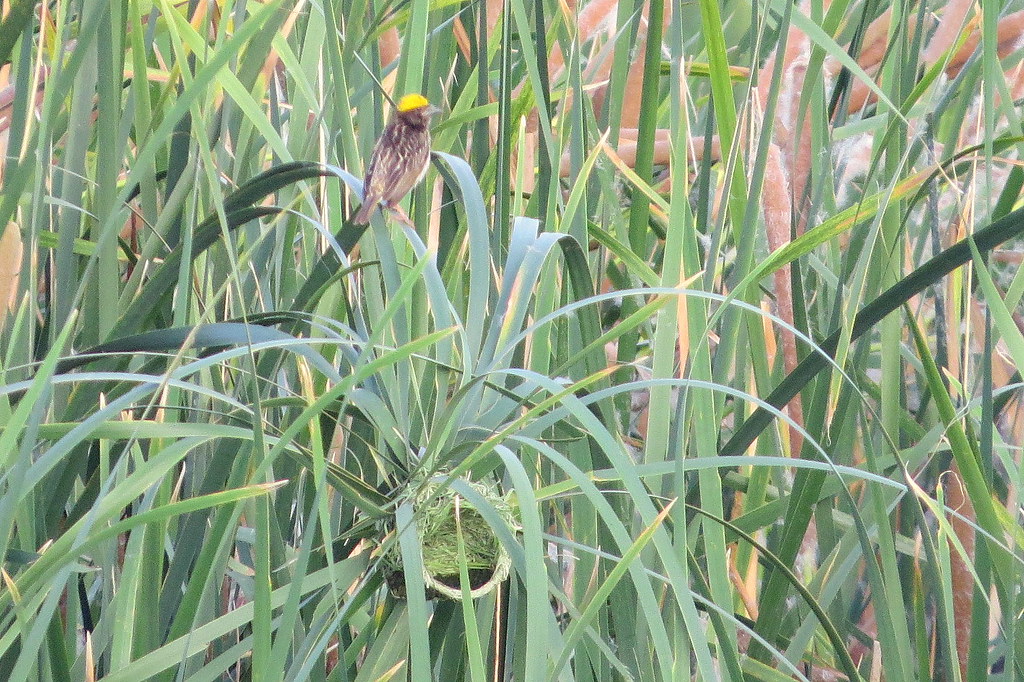 In this connection, I would like to add two excellent videos Ashwin has made, of Streaked Weavers feeding their young: 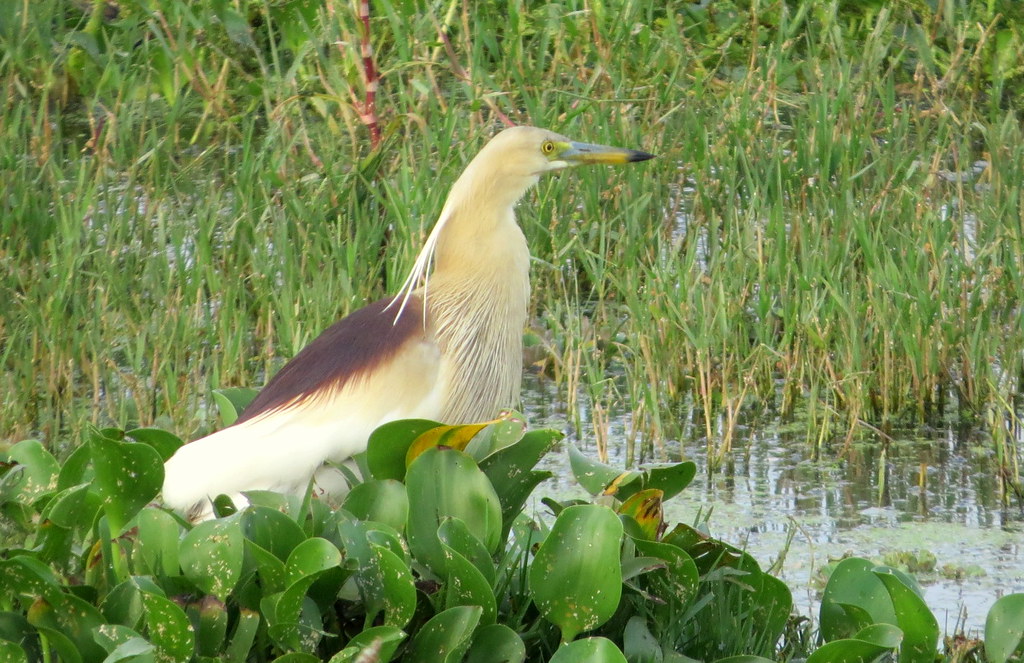 stood stock-still while their sharp eyes scanned the water; and a few Yellow bitterns, which are rather difficult to sight as a rule, were quite clearly visible as, clutching the reeds with both feet, they darted their beaks into the muddy ground for insects, snails or a small fish. 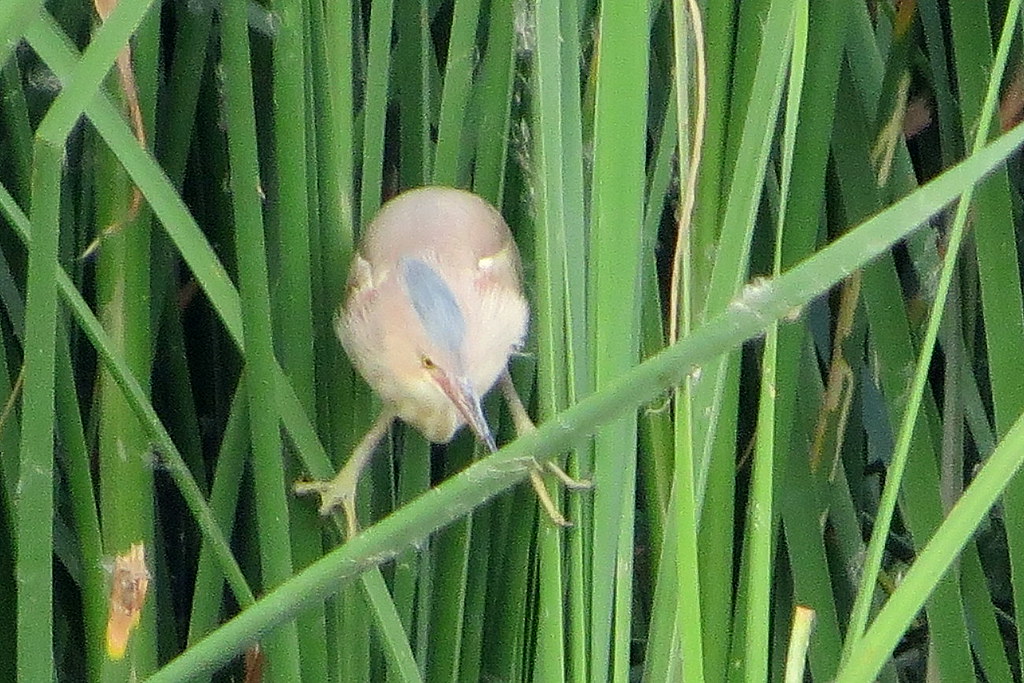 The typical spider-like movement of these birds, along the reeds instead of over the ground, made them easy to identify, and tell apart from the Pond Herons. 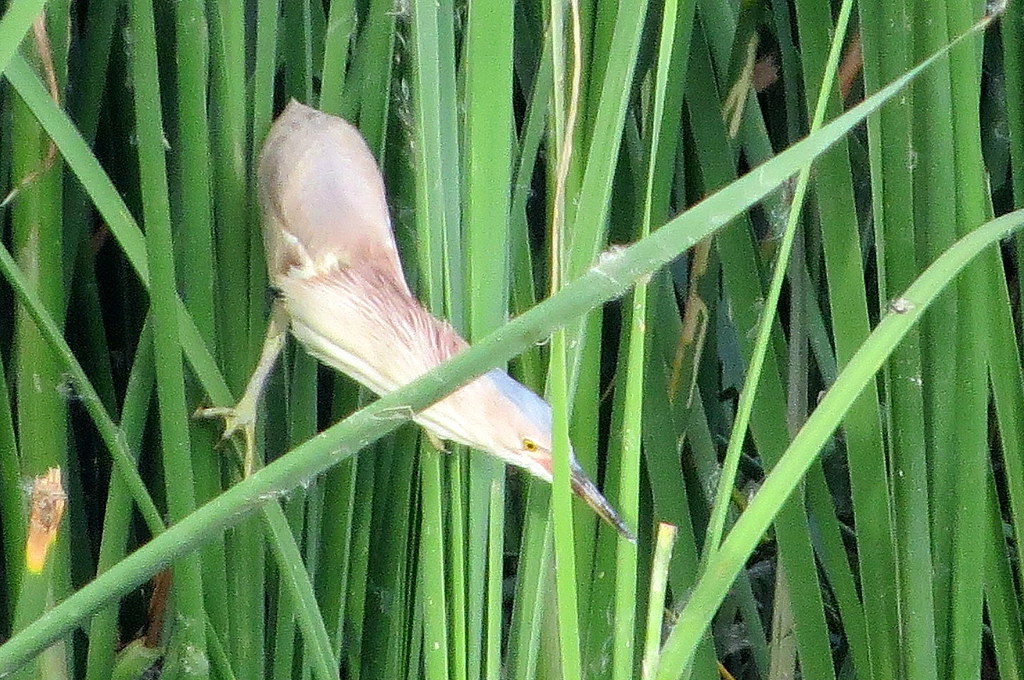 For many of us, this was a "lifer" (a bird being seen for the first time) and the binoculars and the cameras were very busy indeed!

One surprising fact was that there were far more Brahminy Kites than Black Kites, in a city where the reverse is often true. We enjoyed their soaring, and their swoops into the water to catch fish, the attempts being successful occasionally.

Cormorants, Little, Indian and Great, were in plenty, and flew in and out of the lake, stippling the water as they landed or took off. Overhead, too, they formed skeins as they disappeared into the brightening sky, perhaps bound for other water bodies. Several Darters added their zigzag snake-necks to our bird count.

Several Spot-billed Pelicans were found in the far reaches, while a few swam lazily around nearer to where we stood. We found only a few Spot-billed Ducks, and some Lesser Whistling Ducks, far away. Meanwhile, Ashy and Plain Prinias, and one single Clamorous Reed Warbler, delighted us at the front of our birding stage. Both the Bronze-winged 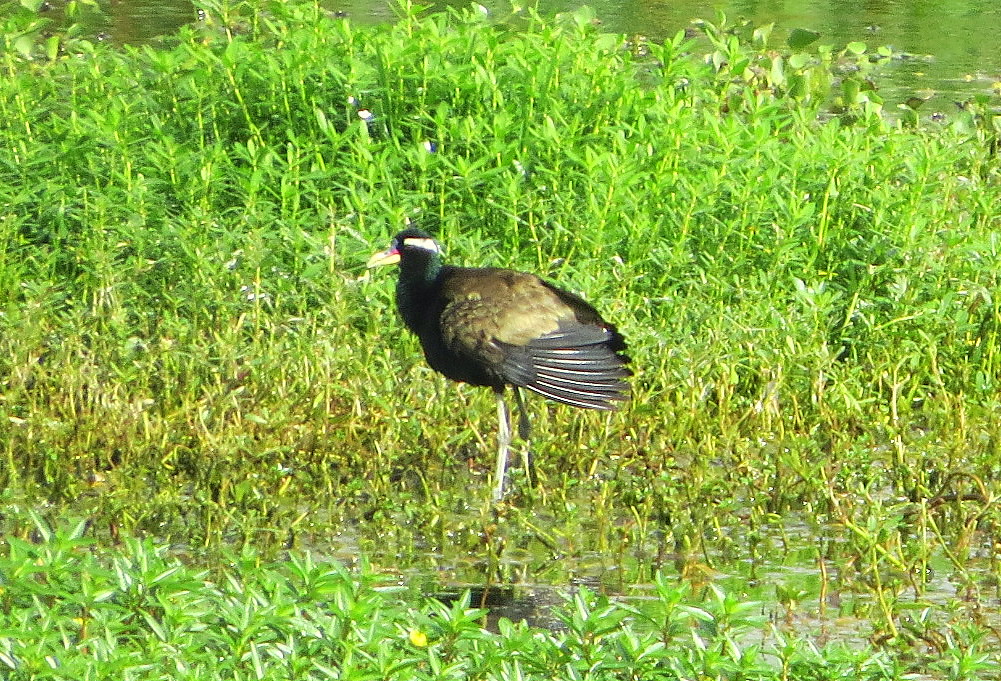 and the Pheasant-tailed Jacanas wandered around, the males of the latter in their spectacular "comma-tail" breeeding plumage. For some reason, there were only two Painted Storks, one of which struggled (successfully!) with a very large fish, as we looked on. 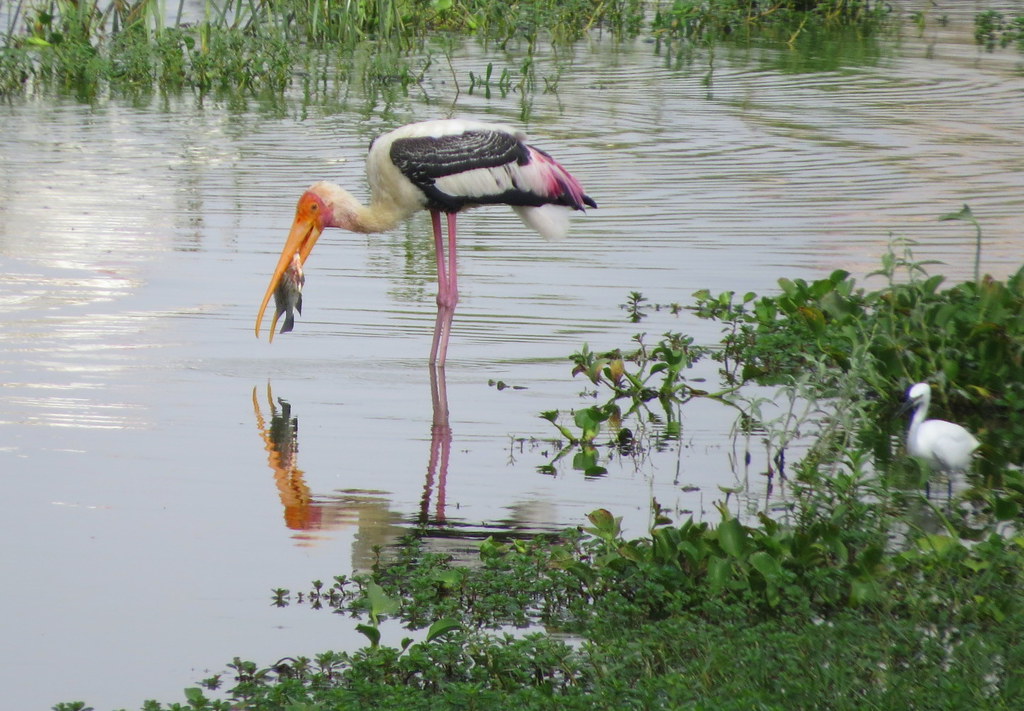 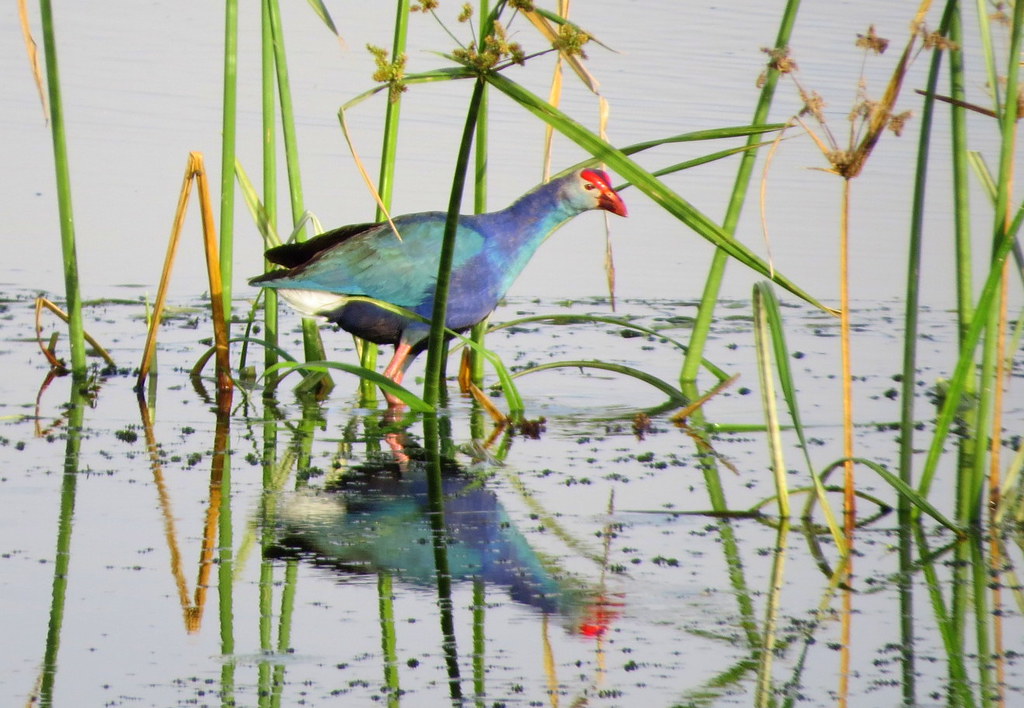 and Common Moorhens added both colour and black-and-red, and we saw the Pied, White-breasted and the Small Blue Kingfisher. Red-rumped Swallows collected mud for their nests, from the shore.

Indeed, I would say that Begur lake is an ideal spot for bird watching and bird photography. One does not need to walk far; the light of the morning sun falls on the birds; one can watch the behaviour of the birds at leisure, rather than just sighting them and moving on. The first frenzy of the cameras gives way to the calm use of the binoculars!

Nor were birds the only thing that caught our attention, Starting with a gleaming Jewel Bug at the entrance, many handsome six footers welcomed us to the lake. Pentatomid bugs, Net-winged Beetles, 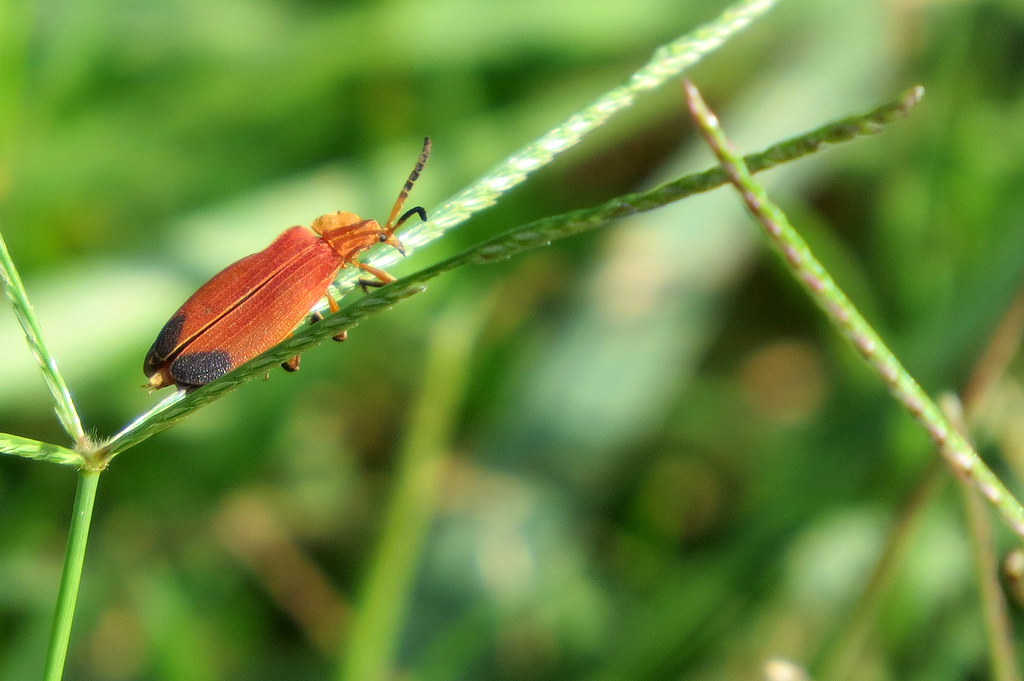 different kinds of bees and wasps nectaring and gathering pollen

and several spiders which were ready to catch any unwary ones, 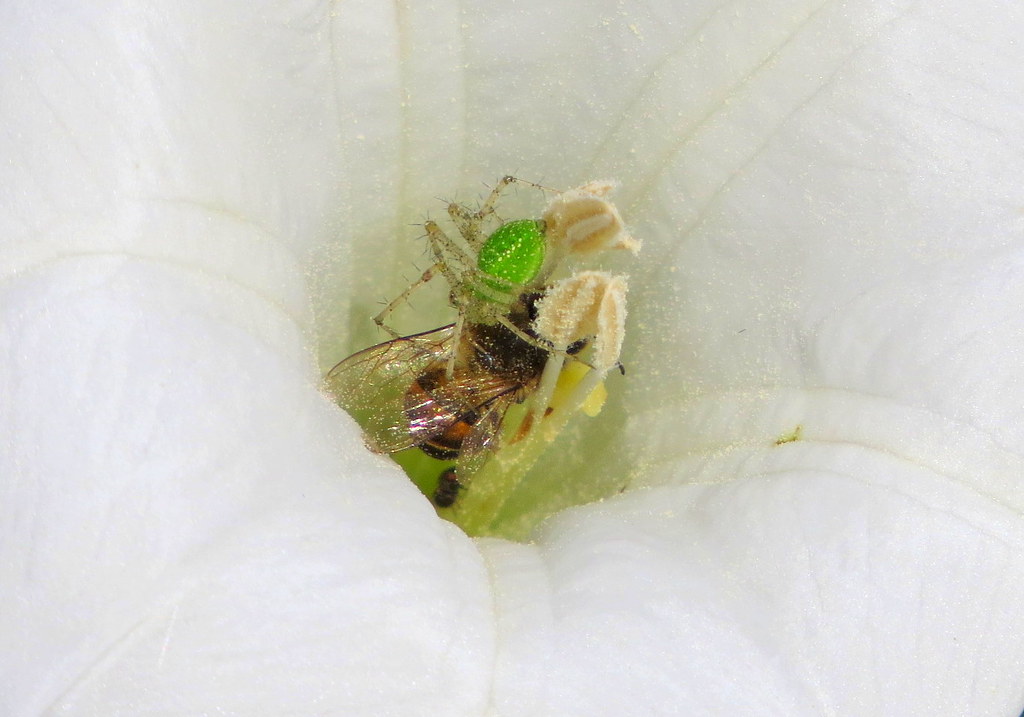 Lynx spider killing a bee which came to nectar in the Dhatura flower. 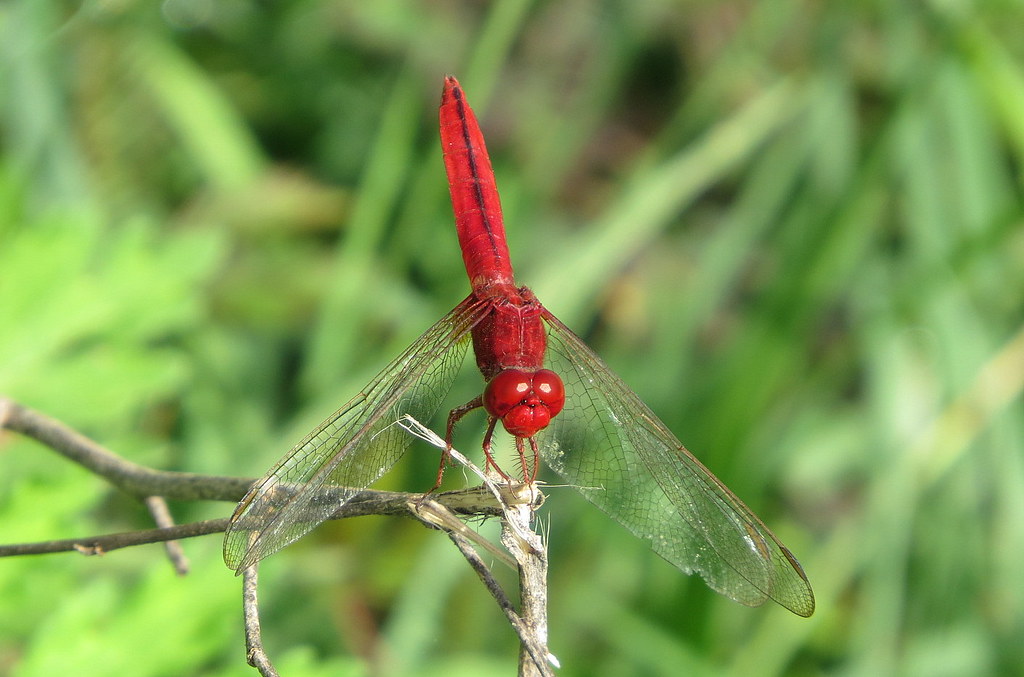 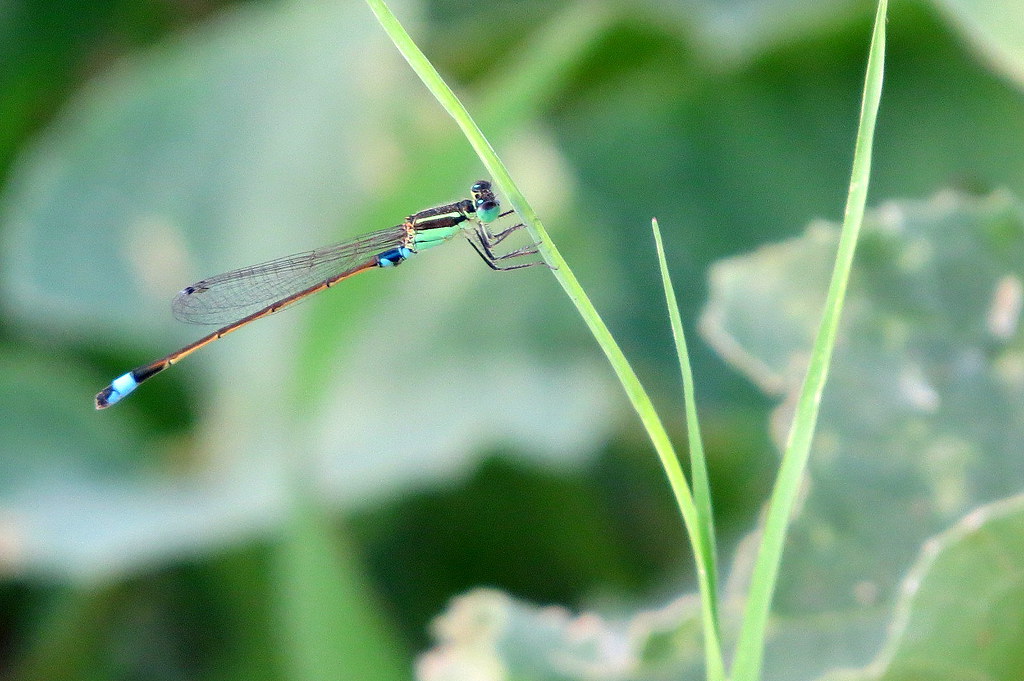 ...there was no dearth of six- and eight-legged creatures. Several butterflies woke up 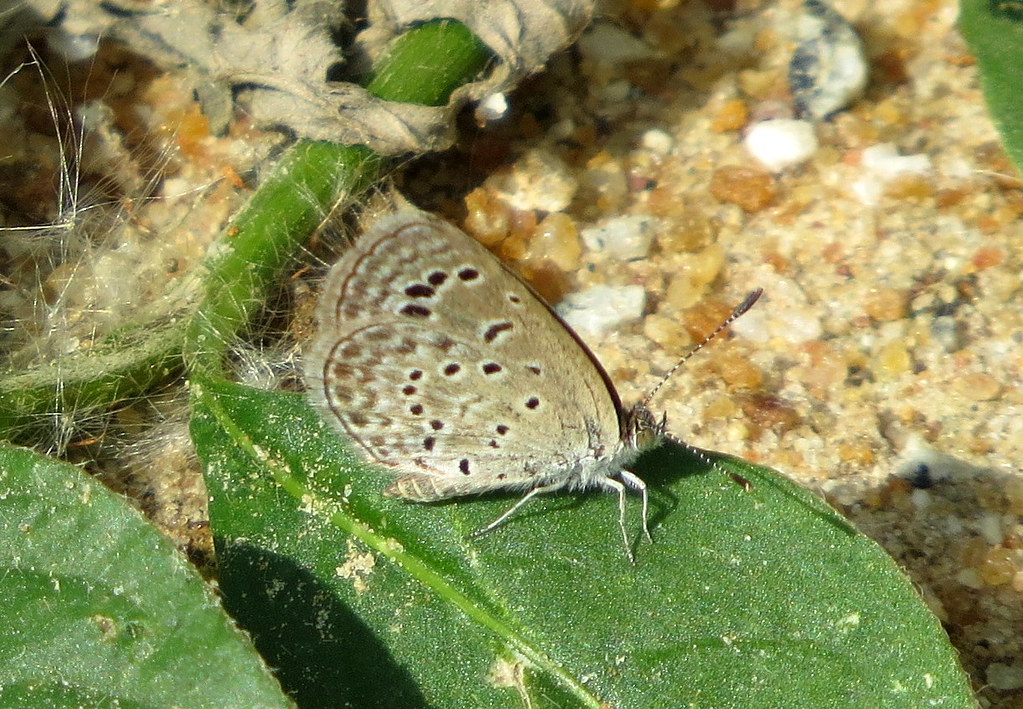 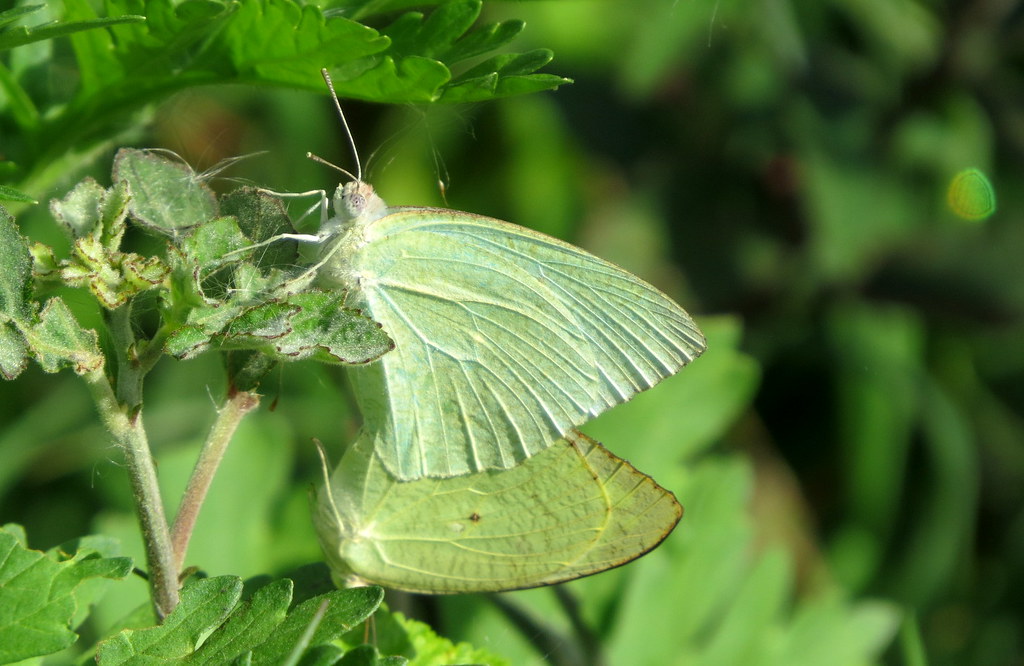 
and flitted around as the sunlight warmed up; we saw Emigrants, Common and Crimson Roses, some Blues, Tawny Costers...and so the list went.

The lake itself was redolent with the peace of the morning. Scudding grey and white moisture-bearing clouds, across patches of freshly-washed blue skies; 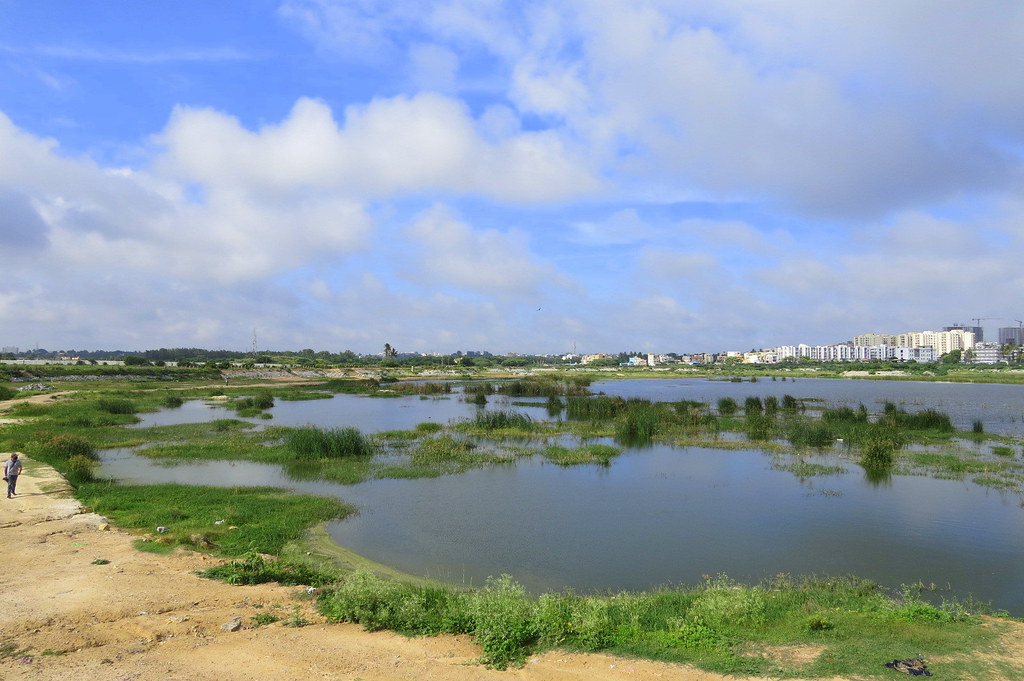 the reflection of those clouds, along with the old Panchalingeswara temple and the multicoloured buildings of Begur, in the waters of the lake; the fresh monsoon breeze and the gentle monsoon sunshine..it was utterly delightful to be out in the open air, enjoying all of this.

Alas, some trash has also made an appearance at the lake, as has some stagnant areas with stinking algae, 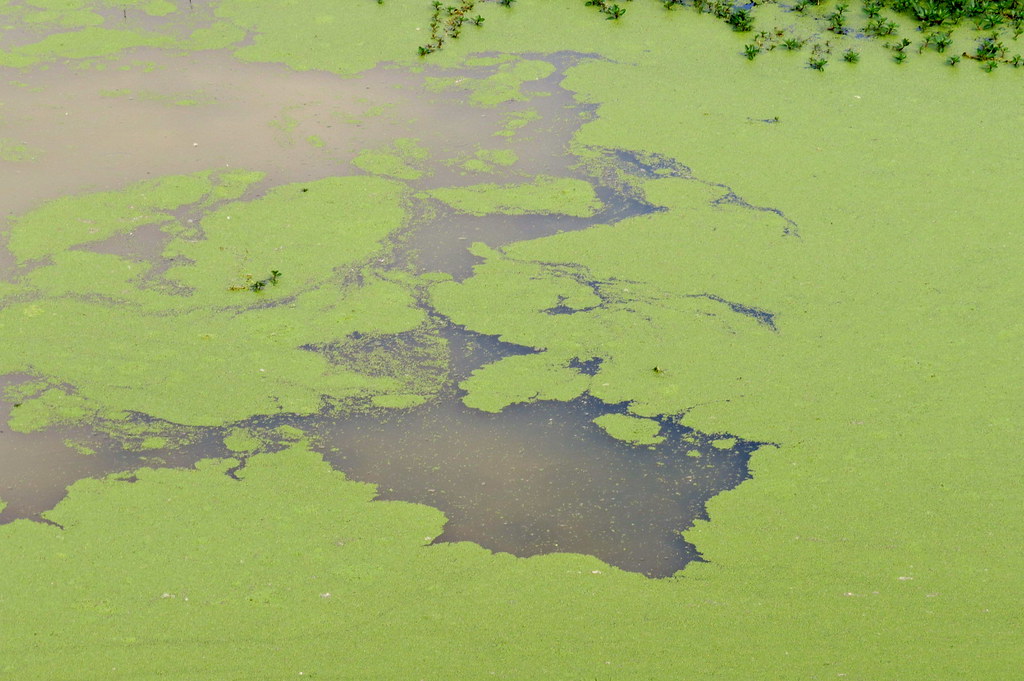 but with the easing of the lockdown, I hope that the lake will be better maintained. 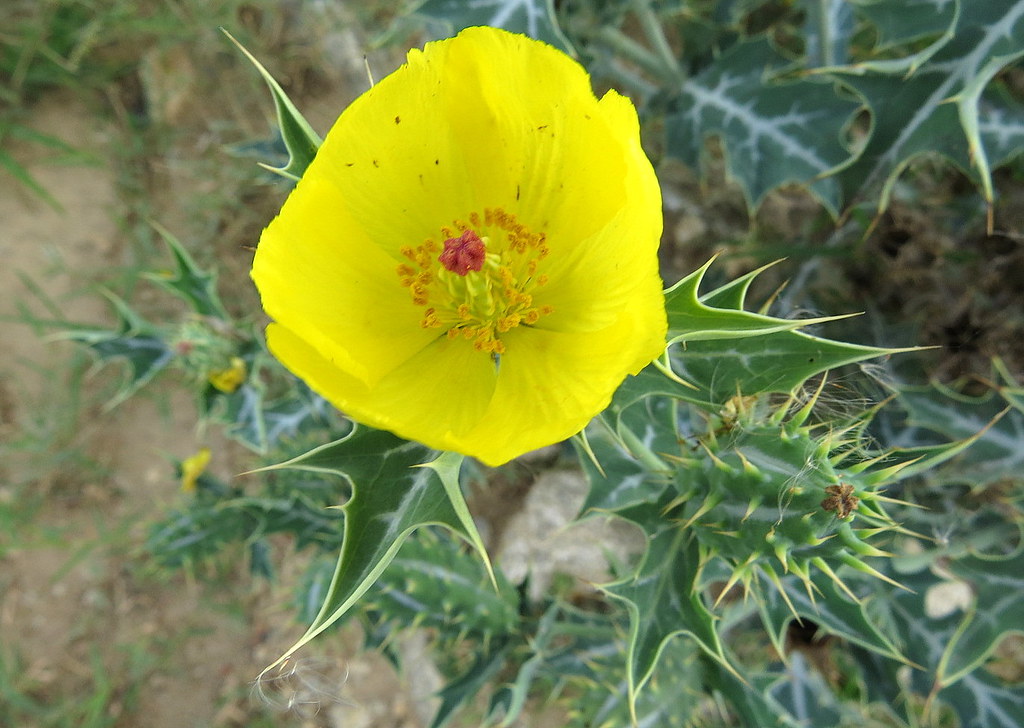 
We shared our snacks (having removed our masks for a bit, in case you were wondering) and munched contentedly with the ease of undemanding camaraderie, and went homes with our spirits lifted and our memories, and memory cards, filled up! 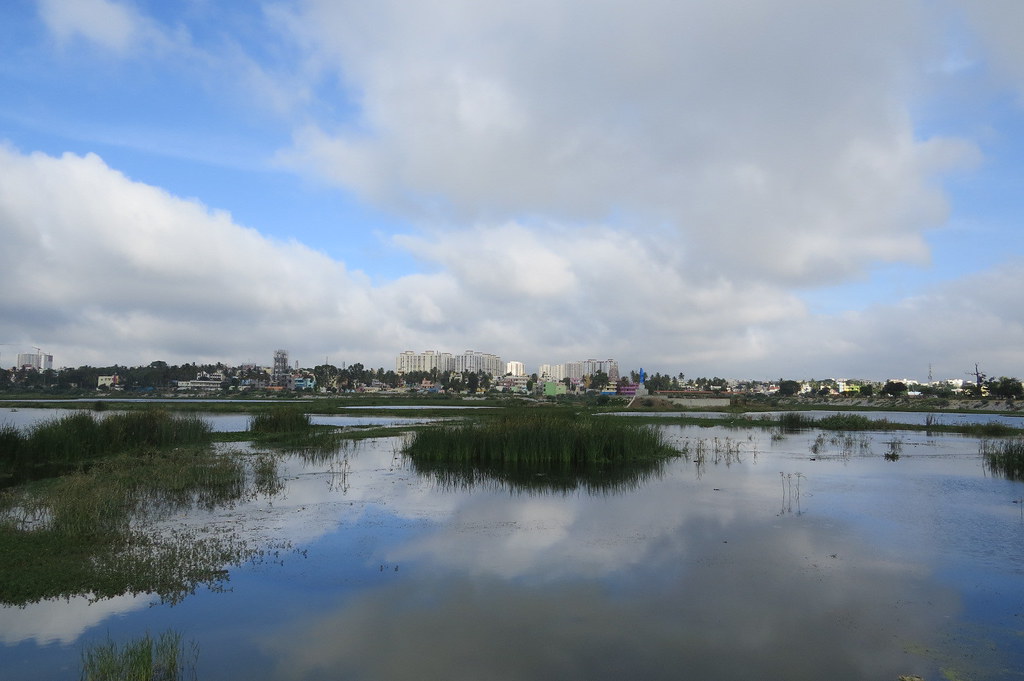 and on FB at

Looking forward to more outings with all of us having our good health intact,