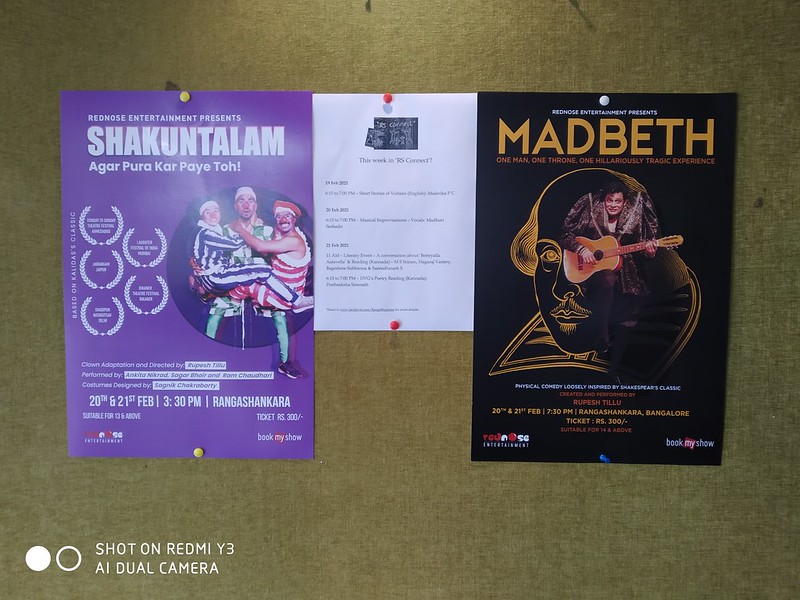 It's not often that I watch productions back-to-back; I like to let the effect of one performance "settle" into me, and introspect before I write a review. But since I was not free for the Sunday performances of Rednose Entertainment's "Shakuntalam,...agar pura kar paye to" and "Madbeth", I decided to attend both on Saturday, 20 Feb '21, at Ranga Shankara (the only theatre venue I go to, since I can walk there and back home).

Another reason for doing this was the chat I'd had with Rupesh Tillu, who founded Rednose Entertainment in Sweden, and has travelled the world with his "clown theatre". (Madbeth was the 130th performance.) I found him passionate and articulate about his work, and wanted to see two performances to get a better idea of his oeuvre. 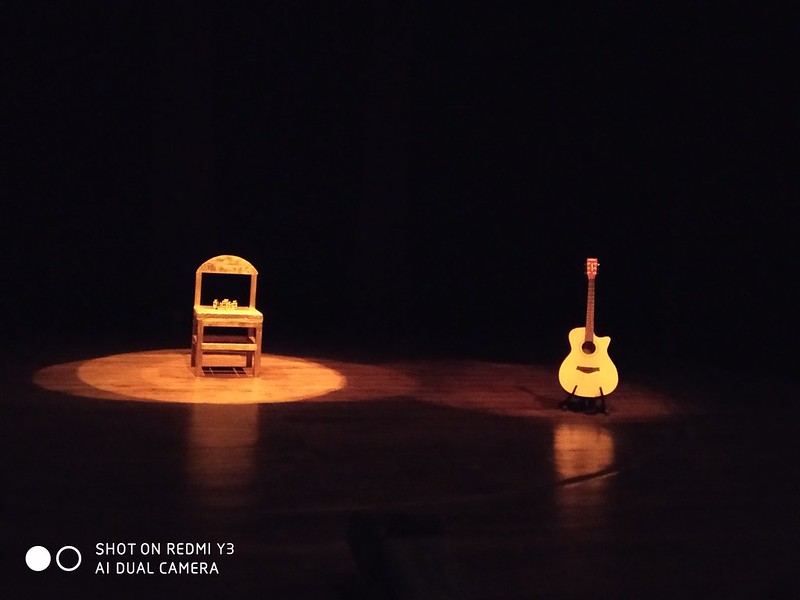 The three props used in "Madbeth"


The afternoon performance began with a unique request to the audience, not to switch off their phones, but to tweet, FaceBook and WhatsApp about the play to everyone!

As their names indicate, the performances are based loosely on "Abhigyana Shakuntalam" by Kalidasa and "Macbeth" by Shakespeare. "Shakuntalam" had three performers (the characters kept interchanging their roles, adding to the hilarity). A laugh-inducing mix of Hindi and Sanskrit was used, making it easy for the audience to both follow the action and smile. Rupesh's young daughter Adya also appeared on stage as a deer, wearing a pair of antlers.The action moved from Act to Act, with the title giving the proviso that the play might, or might not, be finished. Shakuntala, Kanva, Durvasa, Dushyant, and the little Bharat...they all came and went as the saga proceeded. The costumes were the usual frilled overalls of the clowns, and the nominate red noses were worn by the performers, who interacted with the audience, getting them completely involved in the storyline and the ridiculous spoofs on the original story.

In contrast, "Madbeth" was a solo show. Rupesh took the stage dressed in a black-and-gold Elizabethan-style coat and pantaloons, with a cape. For an hour, he held a willing audience in the palm of his hand, eliciting laughs at will with just a look or a word. Banquo was a "real ghost"....Macbeth called him up, asked to sit here, stand there...as he wished. Macbeth called upon the audience, walked among them, made them part of the performance before sending them back to their seats after asking the rest of the playgoers to give them a big hand. Rupesh slipped in and out of characters, and made his volunteers do so too. The rest of the audience were given directions too...to clap, to say "Wow!" at certain points, and the audience was thus completely involved physically as well as mentally in the action. A member of the audience was given a shining crown and came to the stage as King Duncan. Rupesh calls this "clown theatre", and I think we saw this form at its best. I could definitely understand his statement that he abstained from performances throughout the Covid period as he cannot perform without a live audience; it is indeed an integral part of his performance.

The lighting and the music were excellent too. The lighting was, indeed, brought into the humour with commands from the performer to stop at certain points! Rupesh also included elements of sleight of hand in his performance, all of it totalling up to a very enjoyable experience for the audience. 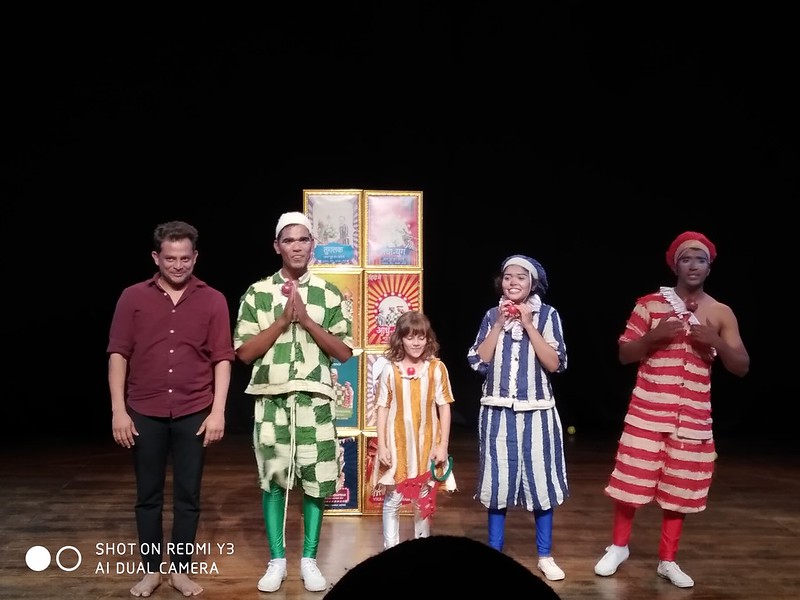 Rupesh and the cast taking a bow after "Shakuntalam"

Do I have a nit to pick? Yes, I do. After each performance, the cast did take a bow, but no one in the cast or crew was introduced by name. When we have watched and enjoyed a performance, we would certainly like to spend a few minutes to get to know the names of those who have made it a successful production...especially when there is no brochure, either. So Rupesh, I was disappointed that I never got to know the names of the cast and crew, to include in this review; I just managed to ask Adya for her name and I am not even sure I got it right!

The audience was rather sparse on Saturday, I hope there were full houses for the performances on Sunday.

Wishing Rupesh and his performances more full-house hits in the future.

Rupesh Tillu and team (no names given)
Collapse