Passing through the dense forests of Madhya Pradesh.
Lack of sleep.
The beauty of the Palash trees, blazing orange, and earning their name, "Flame of the Forest". A very young girl with an axe in her hand, off to get firewood,the hard way.
A long veil of mist over the fields, as the landscape changes from forest to agriculture.
The sun, gathering force for the daily fierce assault, even though we are supposed to be in Vasanta Ritu, not Grishma.
A few wild flowers, colourful fields of cultivated ones.
Small temples, beacons of the farmers' faith and hope.
Sugarcane and paddy fields denoting plenty of water.
The call of the chai vendor.
The hypnotic rhythm of the carriage wheels.
The coach of the train that is more than half empty, thanks to Covid.
The pleasure of travelling with a much lower carbon footprint, travelling in a clean carriage, and having a bay of four plus two berths all to myself.
The joys of train travel.

More than half the coach will be empty, but the hungriest babies, and the loudest- voiced passengers who have never heard of earphones, will be in the bay next to yours. You have travelled sleeplessly and boarded the train at 5:30am.....the next-bay passengers wake up at 9 am, and are in fine fettle for the morning chorus of raucous laughter and high-decibel debates. At night, of course, the person in the berth above or next to yours will be the loudest snorer ever.

Quiet minutes of reflection
Happen even during
Busy bouts of work.
When I turn inward,
And probe myself,
I also find myself
Thinking of you;
Your serenity, your clarity...
Your calm acceptance of things....
And your willingness to share
Your insights with me.
You do not judge me
But accept me as I am, warts and all.
I am able to talk to you,
To agree or disagree with you,
With no fear of our communication
Breaking down, or lapsing.
With each conversation we have,
I am, hopefully, a step closer
To knowing myself,
And, through myself,
Perhaps a little more about creation.
Thank you for all this, my friend.
"Thank you", just two words....however....
They are heartfelt.

Email to the Bngbirds io group:

We had a "silken" outing on Sunday, 7th March, to Kommaghatta Lake! 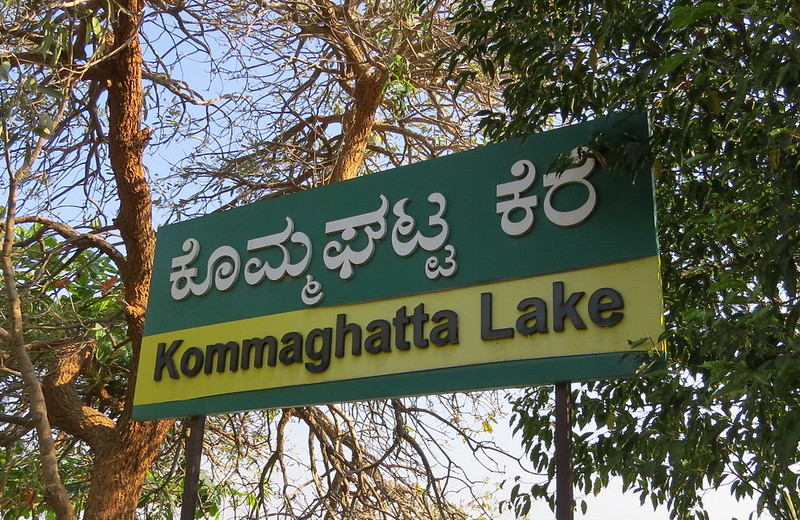 Here are the birders: 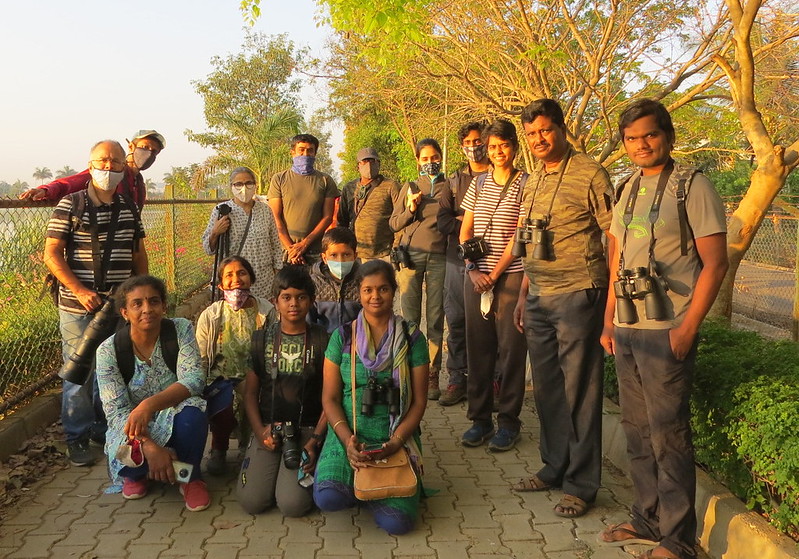 That was because , in the group, we had not one,but three Reshmas! We had (in alphabetical order) Reshma Naik, Reshma Upadhya, and Reshma Varaprasad. So it was the "Silk Route" that we all took, as we entered the lake path, and caught up with the others who had already arrived.

As Satish, who visits this lake often, remarks, where the birds are closer, the rising sun is right in our eyes; and when we walk across to the other side, so that the sun falls on the birds from behind us, they are quite far away! (In this respect, lakes like Hoskote are excellent!)

Reshma and Vishesh were already watching some Northern Shovellers, and we quickly added Grey Herons, Coots, Grebes and a couple of Black-crowned Night Herons to the list...though at this point they all looked like Silhouette Birds! In the bushes and trees, Sunbirds, Koels, and a Fantail Flycatcher (spotted by Varaprasad) added to our count. A flock (is that the right collective noun?) of Lesser Whistling Ducks were sitting pretty in the central island, but slowly took to the water and moved into the light where we could see them better.

The lake has an excellent patch of "waste"land abutting it, and this is prime habitat for several birds. We saw Indian Grey Hornbills, Ashy and Plain Prinias, and several Warblers too. Overhead, Indian White-eyes, the city-friendly Red-whiskered Bulbuls, Jungle and Common Mynas hopped around in the foliage. Flights of Egrets, Ibis, and Herons added to our birdwatching pleasure. Of course, Pond Herons studded the lake shore!

Kumkum Prakash spied a Black-rumped Flameback in one of the trees, and we slowly walked on. We saw so many species of birds that my report would be far too long if I had to mention all of them! 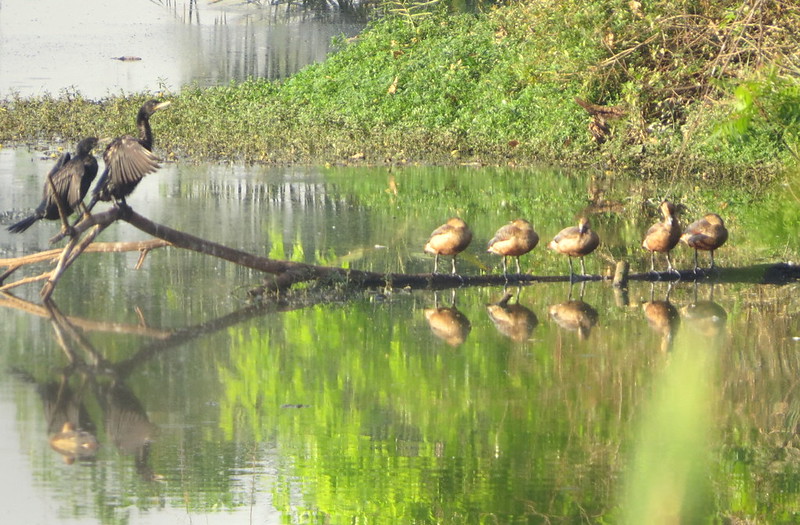 Apart from just seeing the birds, we were able to watch several kinds of behaviour too; Barn and Red-rumped Swallows "hawking" in the air for an insect breakfast, Litte Grebes and Spot-billed Ducks "ducking" for their food. We watched the group feeding of the Shovellers, the striking green heads of the males alternating with the duller browns of the females. A Great Cormorant gave a display of gular fluttering (where the neck/throat area is "fluttered" to cool down the bird), and showed us that the birds, too, have decided that the hot weather has arrived!

Red-wattled Lapwings were at their alarmist best, flying around with their "Did-you-do-it" cries. After some time, though, we felt we might be too close to where they might have laid their eggs, so we moved on.

Several birds "marked attendance" by calls only...I could never see the Coppersmith Barbet though we all head the "kuk! kuk! kuk!" going like a metronome. I heard the "P....Q!' calls of the Puff-throated Babblers, and the Grey Francolins, too, but never got a sight of them.

A fruiting (figging?) Ficus glomerata attracted many birds, and we watched them feeding, too. I do wish there were more trees like this planted!

It was very nice to have children on the walk; Vishesh is becoming a seasoned veteran, and Akshobhya showed me his meticulously compiled bird list at the end of the walk! But it was not only the young ones...Reshma Upadhya also noted down whatever she was seeing. One of the joys of conducting walks is to see new birders taking to such good practices!

There was a sheen of algae over almost the entire lake, which became accentuated at certain places. It was disheartening to see the amount of trash dumped into the lake even after it's been fenced. The water quality, though, seems to be reasonable still, as we saw the Herons and Little Egrets (and two Intermediate Egrets) picking up several fish. 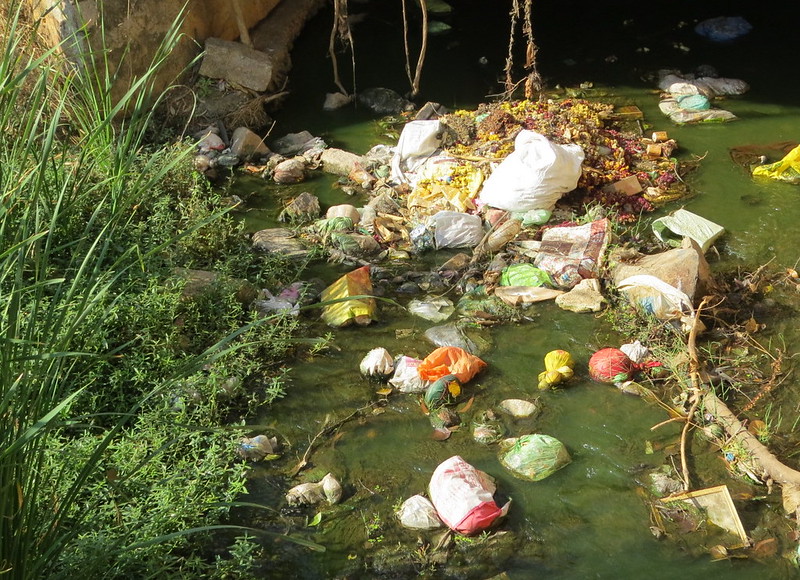 Trash in the lake

Varaprasad told us of a good eatery right there, but alas, it being a Sunday, breakfast had run out by 9.30am, so a few of us went home and others adjourned to Sri Krishna Grand in Kengeri, where we ate a companionable breakfast, exchanging notes, and sharing our pongal and vadas!

Would you like to see the gular fluttering of the Great Cormorant? I took a short video (the bird flew off suddenly!)....here!


and a video of the group feeding of the Shovellers, here: 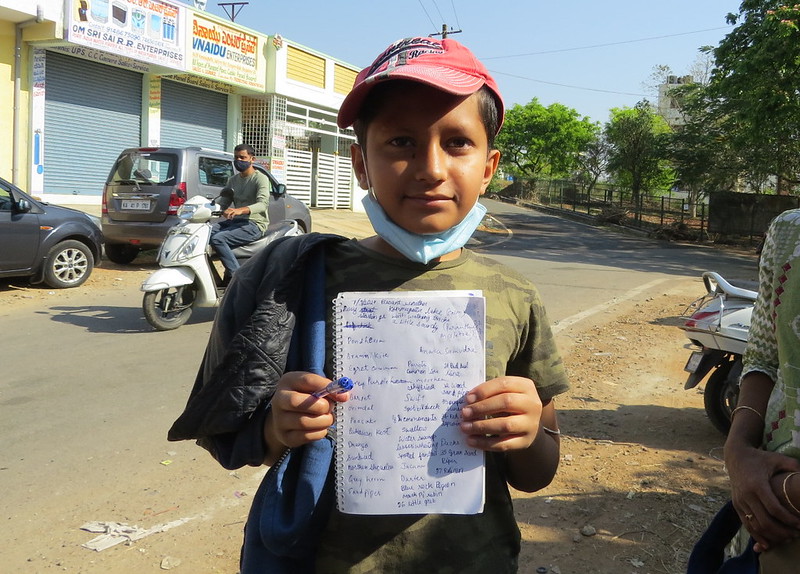 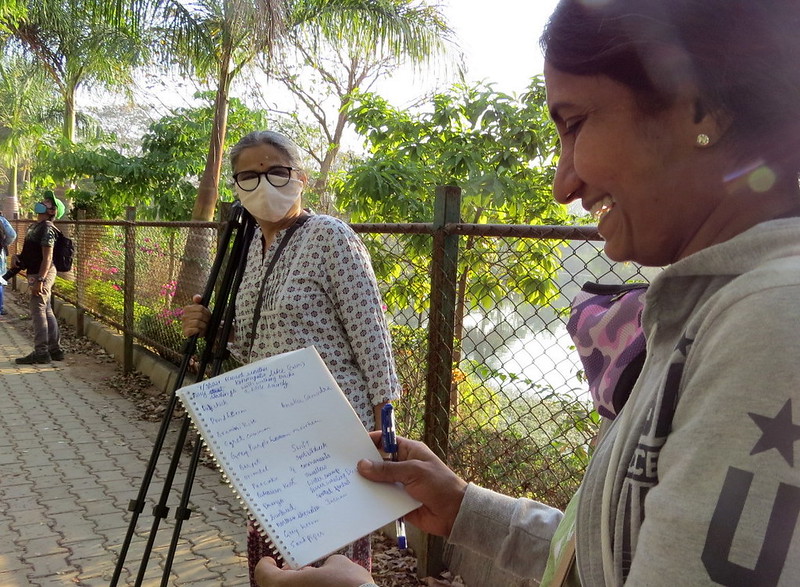 My FB album is at

and my Flickr album, with captions and ids, is at