Many of the living beings that I see on my walks, I find, have interesting mythological stories and spiritual allusions attached to them. Here are a few samplers!

Let's start with a pretty flower that used to be part of almost every garden, whether urban or rural. 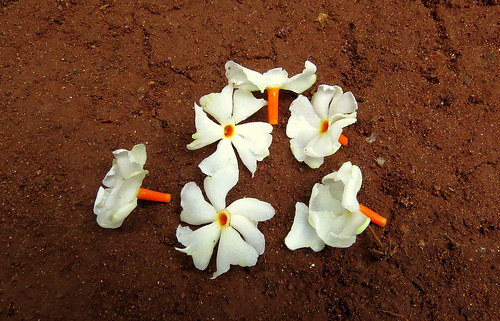 In Hindu mythology, the celestial Parijata tree was the tree of the universe which was owned by Indrani and planted in "Svarga", located between Heaven and Earth. It was supposed to grant every desire. Krishna's wife, Sathyabhama, wanted the tree; his other consort, Rukmini, wanted him to get Parijata flowers for her.

Krishna stole the tree and brought it to Dwaraka, and granted the wishes both his consorts in His usual crafty way. He planted the tree in Sathyabhama's garden, in such a way that the flowers fell into Rukmini's garden!

There is another poignant tale associated with this flower. According to this myth, Princess Parijataka was in love with the Sun. Her love remained unrequited. Heartbroken, she committed suicide and from her ashes rose the Parijat tree. Since she is unable to bear the sight of her love during the day, she blooms only at night, and sheds the flowers as tears, before the sun rises. Some legends also go on to say that the tree sheds its flowers upon the touch of the first rays of the sun. These flowers spread their fragrance during the day, as a sign of Parijataka’s undying love for her lover, the Sun.

Here's a flower that stands in the lakes, and spreads its beauty across the waters. 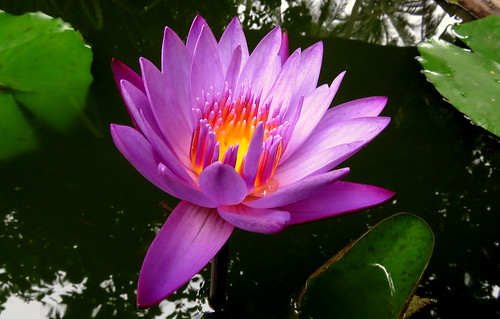 I found this lovely Ojibwe (Native American) legend about a beautiful woman, who loved the beautiful lakes and bounty of the Ojibwe people and their land. She appeared in the dreams of the chief of the tribe, asking the people to choose in what form she should reside among them. Worried about choosing wrongly and losing her, they asked her to choose her form herself. Her response:

"I know where I will live.....I shall live where the canoes of the people travel. Dear children, I will kiss your cheeks as you sleep by the lakes and there I will make my home....I will be the water lily!”

The next day, the lake near which the tribe lived was filled with thousands of waterlilies.

The Passion Flower has stories related to more than one religion. 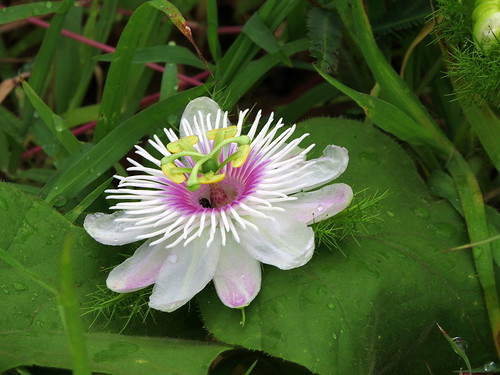 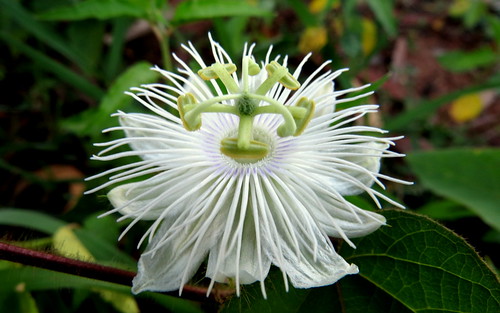 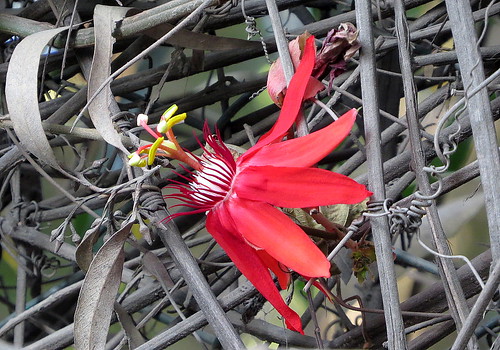 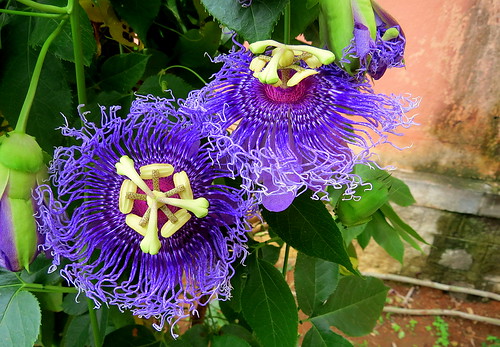 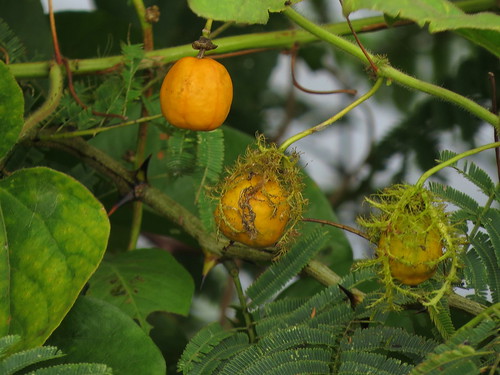 The "Passion" in "passion flower" refers to the passion of Jesus in Christian theology.[29] In the 15th and 16th centuries, Spanish Christian missionaries adopted the unique physical structures of this plant, particularly the numbers of its various flower parts, as symbols of the last days of Jesus and especially his crucifixion, as follows:

The blue passion flower (P. caerulea) shows most elements of the Christian symbolism
The pointed tips of the leaves were taken to represent the Holy Lance.
The tendrils represent the whips used in the flagellation of Christ.
The ten petals and sepals represent the ten faithful apostles (excluding St. Peter the denier and Judas Iscariot the betrayer).
The flower's radial filaments, which can number more than a hundred and vary from flower to flower, represent the crown of thorns.
The chalice-shaped ovary with its receptacle represents the Holy Grail.
The 3 stigmas represent 3 nails and the 5 anthers below them 5 hammers or 5 wounds (four by the nails and one by the lance).
The blue and white colors of many species' flowers represent Heaven and Purity.
In addition, the flower keeps open three days, symbolising the three years' ministry.

In India, blue passion flowers are called Krishna kamala (कृष्णकमळ) in Karnataka and Maharashtra, while in Uttar Pradesh, it is colloquially called "Panch Pandav" (referring to the five Pandavas in the Hindu epic, the Mahabharata). The five anthers are interpreted as the five Pandavas, the divine Krishna is at the centre, and the radial filaments are the opposing hundred Kauravas. The colour blue is moreover associated with Krishna as the colour of his aura.

The Squirrel (the Three-striped Palm Squirrel, to give it its full name) is a little mammal that can be found in all our cities and villages. 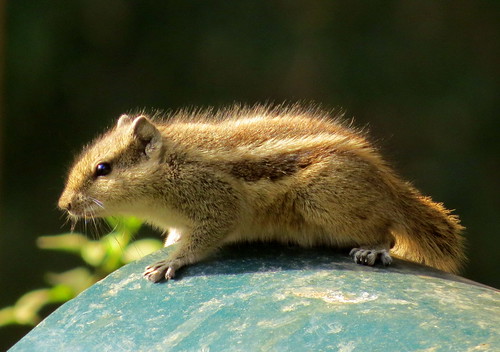 According to Ramayana, the squirrel earned its stripes for assisting the monkey army in building the bridge to Lanka. The squirrel worked tirelessly, the story goes, gathering pebbles and small stones for the bridge’s construction, never worrying that its contribution was minimal. Rama was so impressed with its dedication to Sita’s rescue mission, that he caressed the little creature’s back with three fingers, leaving behind three prominent white stripes.

Even nocturnal creatures have stories and mythology pertaining to them. Here is the Owl, which keeps our rodent population in check by preying on them at night. 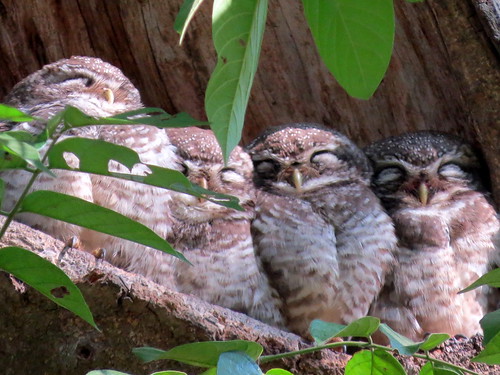 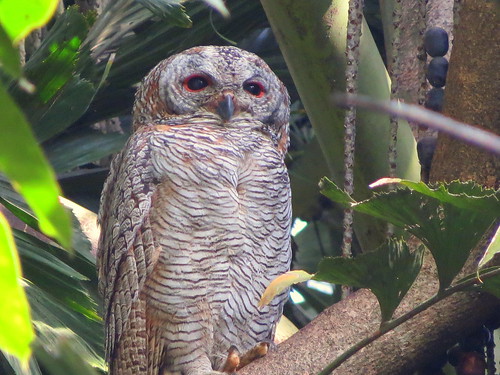 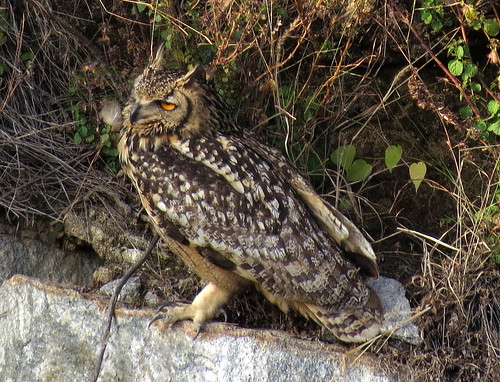 
In Hindu mythology the owl has been treated at times reverently and given some place of prestige. Lakshmi, the Hindu goddess of money and wealth, rides an owl. Some people believe that if a white owl enters a home it is treated as a good omen by relating it to the possible flow of wealth or money into that home. It is also believed that the owls have magical properties which can ward off bad luck.
However, because of their nocturnal activity and screeching call, they have also been associated with bad luck and death, and are believed to be Alakshmi’s (Lakshmi’s twin, the goddess of strife and misfortune) savari or vehicle. I have also heard a myth that owls have jewels in their foreheads, which probably explains why some of them are killed.

The Peepal Tree is much revered in mythology, and perhaps history, too. 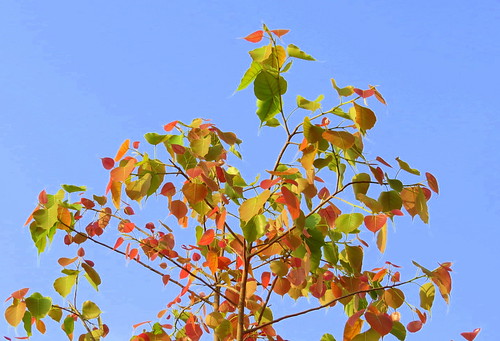 Fresh leaves of the Peepal Tree 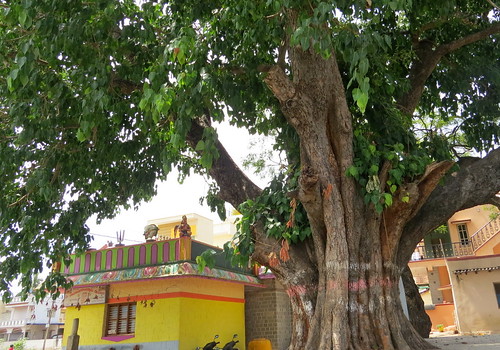 Siddhartha Gautama, the spiritual teacher who became known as the Buddha, is said to have attained enlightenment circa 500 BCE under this tree, which is called the Bodhi (Giver of Knowledge).
Ashvattha, as the tree is also called, is a name of Shiva and Vishnu; according to Sankara, this name is derived from the terms shva (tomorrow) and stha (that which remains)

Small vignettes surround other birds too. 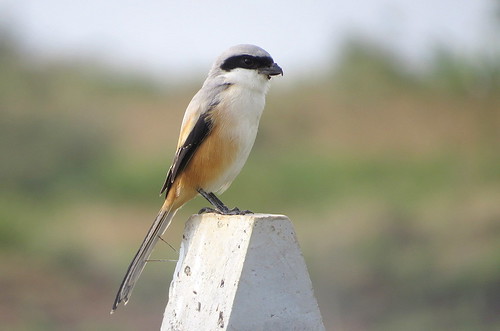 Many people that Shrikes are called "butcher birds" as some of them impale their prey on throns before eating them. But they are also called "Gandhari", after the wife of Dhritarashtra, the Kuru king who was the father of the Kauravas in the Mahabharata, because of the "masks" over their eyes. Gandhari, to be like her husband, blindfolded herself permanently when she married him.

A bird that stands in shallow waters to feed, is also associated with spirituality. 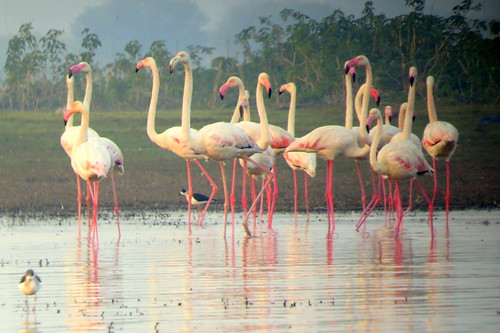 In general, flamingos are considered to be very positive spiritual symbols. When the lovely flamingo spirit animal calls, we are being reminded to celebrate the beauty, romance, and fun in life. They are called "agni pankh", that is, with "wings of flame"...the name can be understood from the photograph.

Fascinating, isn't it, to get to know the stories that surround our fellow-beings!

"Idhu jokku!"
My mother told me the story of how, when SHE was young (practically takes us back to B.C!) , she'd visited one of those "doorin' talkies"(touring talkies), which were makeshift bamboo or palm-thatch shacks, with the movie screened on a large cloth.
The movie would go on, and a comedy scene would appear on the screen. The audience, she said, watched in silence.

Then, on the screen would appear the words, "Ithu jokku" ("This is a joke"). Immediately, the audience would erupt into laughter.

I strongly suspect my mother of having made the whole thing up, just to get a laugh out of us, but the word "jokku" and the phrase, "ithu jokku!" have been gleefully used in our family ever since.
Collapse