With the virus slowly waning (but still appearing here and there) in Bangalore, many more people are feeling confident not only about attending nature/bird outings, but bringing children as well. 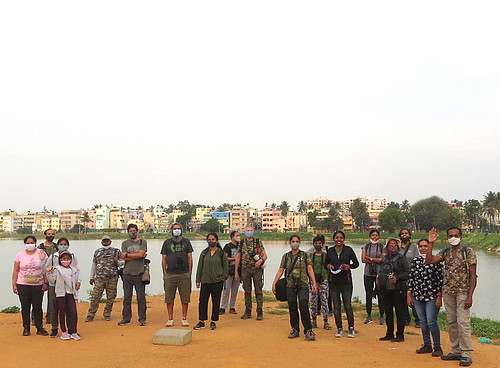 I decided to revisit Sarakki Lake as Sri K S Bhat, who, along with his team, has been instrumental in rejuvenating the lake, planting trees, and installing a Sewage Treatment Plant, overcoming many obstacles. He had invited me to do a bird count, which I had done in Nov '19, recording.55 species:

When I announced the outing as usual on the Bngbirds FB group, this (io) egroup, and on the Telegram group, I expected about 20 people to join, but more than 40 made it to the lake, which was very heartening indeed. The first sight that greeted our eyes as we walked in at the entrance near the Ganesh temple (on the north-eastern side of the lake, which has an approx 2 km perimeter walk) was that of several Spot-billed Pelicans floating serenely on the water. Some of these birds may have become resident in Bangalore, but many of them are migrants too, so we started the walk on an optimistic note...further strengthened by a Grey Wagtail, which walked in its typical tail-wagging way along the shore.

We were soon treated to the spectacle of group fishing, not only by the pod of several Pelicans, 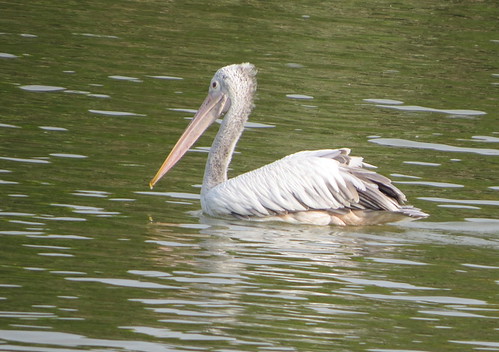 but also Little, Indian, and Great Cormorants, all grouped together and alternately swimming and diving. I am afraid our sympathies were not with the fish that were being swallowed, but with the birds who were fishing so smartly, with their webbed feet churning up both the water and food.

The island in the centre of the lake was also productive in terms of birds. Little Egrets, several Cormorants, and Black-crowned Night Herons could be spotted through our binoculars, and captured by our lenses. A couple of Spot-billed Ducks flew by in a splash of colour.

As we walked on, we found Little Grebes, and some Common Coots (what are they called now?) in the water, too; and Darters streaked under the water and came up with speared fish, which they then proceeded to feed on. The process of subjugating a live fish can be quite an exhausting one for a Cormorant!

The shore birds, too, showed themselves. Purple and Purple-rumped Sunbirds glittered like jewels in the emerging sunlight; tiny Pale-billed Flowerpeckers showed how energetic life can be even when one is very small. Ashy Prinias 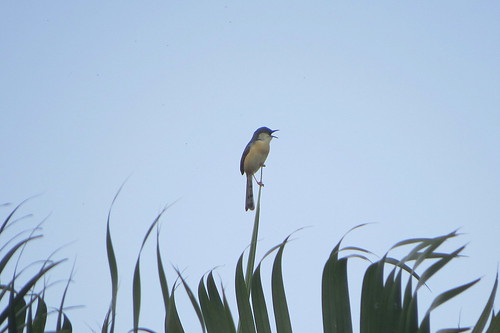 and Common Tailorbirds also taught us that the volume of the call can be inversely proportional to the bird size.

We watched those "patient fishermen", the Pond Herons, studding the shores of the lake and the island, waiting for an opportune moment to make a catch. These birds seem as serene as a sadhu in motionless meditation...until a fish catches their eye, when they strike with lightning speed!

A lone Black Drongo flew overhead, as did a solitary White-throated Kingfisher. We looked at the trees along the boundary wall, and watched two White-cheeked Barbets on the wires. 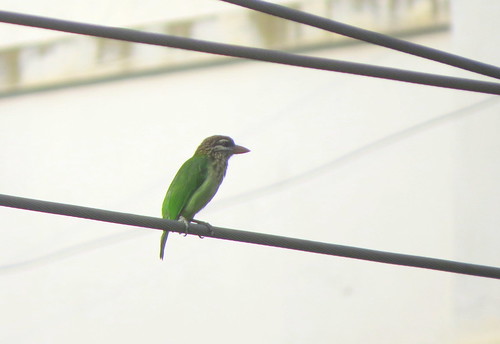 These birds, common in the urban space, are endemic, and are found nowhere else in the world.

A single Painted Stork (it was followed later by another) floated in on confidents wings, and landed at the edge of the island. It proceeded to put its beak into the water, and then stood, stock-still, for quite fifteen minutes, prompting us to wonder why it was behaving in this way...no motion of the legs to stir up prey, just that statue-like pose! And, without getting any fish, it moved slowly away after a while. 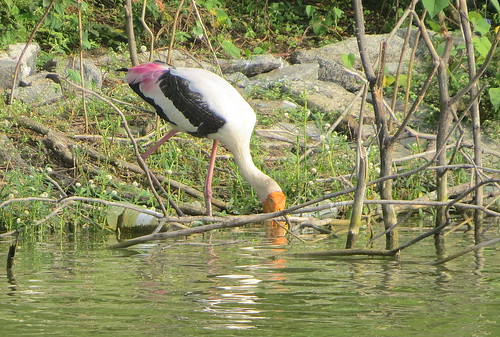 Of course, the beautiful Black and Brahminy Kites wheeled overhead. Occasionally, one would swoop down into the water; it might, or might not, be successful in getting a bite of breakfast. When we were walking back, someone in a house beyond the boundary wall suddenly started throwing food to the Kites, which crowded and wheeled and and caught the food (I think it was meat) in mid-air, giving a display which we watched, spell-bound!

Almost as we were about to turn back at the south-western corner of the lake, a single, beautiful Wire-tailed Swallow started swooping around, showing its violet-blue sheen of the feathers in the sunlight. We realized that it had a nest under the bridge, and several people (keeping a good distance, of course) went down in the grass to get a view of the nest. 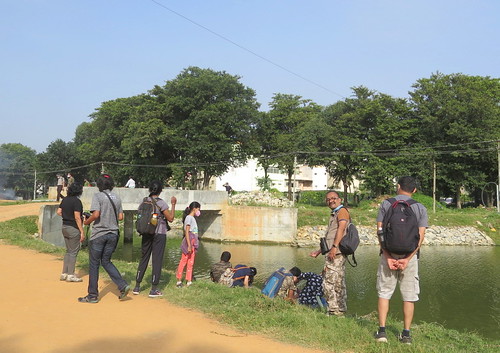 Though the efforts of the volunteers have been valiant, but nevertheless, a lot of people are intent on dumping trash at the sides of the lake, and into it . 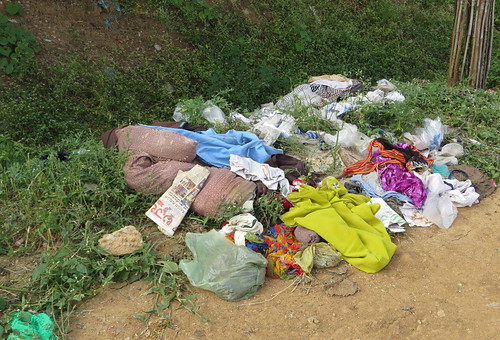 We saw one man from the apartment building beyond the boundary wall throw a bag of trash over the wall. I yelled at him, and he appeared unmoved. What is it that makes citizens think that everything beyond their home is a dumping yard? How can we change this don't-care mindset?

The butterflies were quite lovely to watch, too. Common Crows, Jezebels, Grass Yellows and an occasional Plain Tiger and Blue Tiger, kept us occupied. The trees that have been planted in the lake include Ficus, Neem, and other native species, and we hope that the lake will not be too manicured, and allow some grasses and reeds to flourish, which would attract many more creatures. 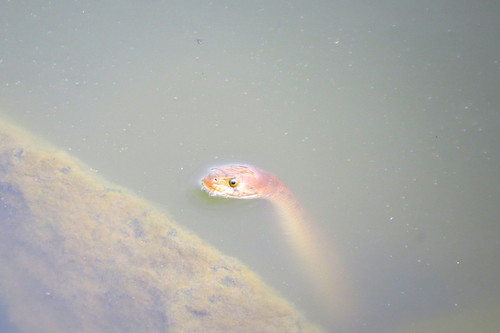 A Checkered Keelback comes to the surface of the water.

It was very nice to interact with several of the children; in fact, Mihika,in tagging along with us, got separated from her mother! Some of us exited the lake through the "informal" exit on the side road 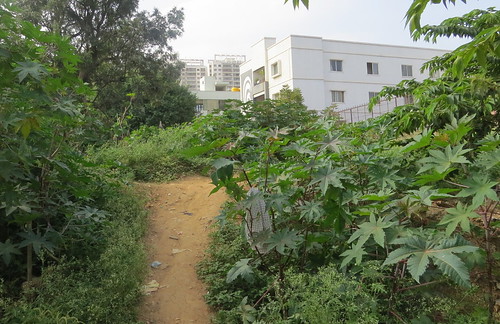 and Meena and Anand restored her to Megha at the main gate.

Several of us adjourned to Brahmin's Tiffins about a km away, 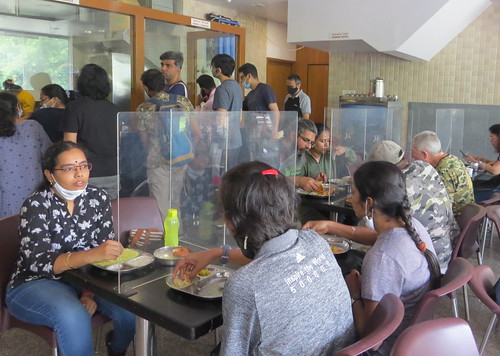 and well satisfied with the way our morning had gone, dispersed.

I do hope that Sarakki Lake continues to prosper and thrive, attracting both flora and fauna.

I have put up short videos..... the waterfowl group fishing at

and of the Kites crowding around, at

The eBird list (once again, 55 species...is this a magic number for this lake, I wonder!) is

and the FB album,


Cheers, and looking forward to the next weekend,
Deepa.
Collapse