Two birds in the hand is worth.... 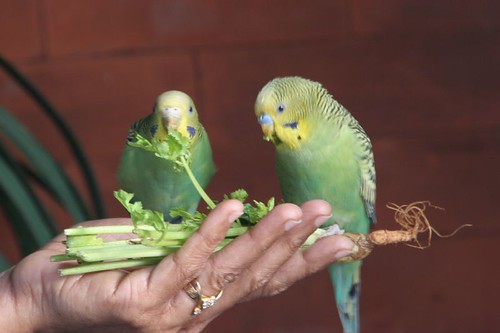 I love budgerigars. Originally grassland birds, they make great pets; low-maintenance, cheerful, gregarious birds who can recognize the people who train and deal with them, and get up to delightful tricks.

We had about 30 birds in a very large enclosure in the garden at home when I was growing up in Kolkata;I used to bring a couple of babies into the house with me and they would become totally tame.

They can be really smart. I had one who could open the little latch on her cage when she wanted to go in; another who would wander around the flat and (I am NOT kidding) hop on to any passing foot and take a ride, and yet another who would come down from her perch, wander casually across the dining table where I sat, and climb on to my shoulder and peck at my ear. She would also come flying into any room where I took the male bird, call him and take him back; she knew her way around the entire flat. I have a photo  of this one putting her head into the little hole in the middle of the gas ring as she tried to investigate it. She nearly drowned getting into a glass of water (it was too narrrow for her to easily get out) and was saved by my brother. My darling Ratty (she was not a handsome bird, rather ratty in appearance)...how I miss her even today.

Once I put some greens (kothmeer) inside an upturned glass bowl, on a table, so that a budgie could see it but not get to it...the female PUSHED the bowl along and tried to get in by the edge when the bowl was a little out of the edge of the table!

All the most curious, intelligent birds were female....I don't know whether I should draw any inferences from this. ;-)

I had given away my birds when we went to live in the Gulf, and never thought I would have them again, as I didn't want to support the traffic in these birds that cannot survive in the wild (cats or crows or other predatory birds will eat them up.) But a servant maid who came to my door had a baby budgie in her hand.She said she was "going to let it go" as she didn't know how to feed it. So I bought it from her, and went and got seeds...and another bird to keep him company(if the cere, or the nostril area, is blue, it's a male; if brown, it's a female). Budgies should never;be kept singly, I think, even though this is one way of making imitate the human voice. How would I feel if I were never again to see one of my own species, ever?

I put them in my glass-covered balcony without a cage, arranging twigs for them so that they could hop around. Every morning, we would come out to the chattering of the male..the female was a self-possessed soul and didn't chirp much! They flew all around, and would come flying to my hand for seeds and greens, which they love to eat and to roll around in. They would splash in the water bowl and eat up a lot of mud, and keep gnawing at twigs and the earth of the flowerpots. They would scold me if I disturbed them. The scolding of a budgie is very different from the noise it makes when afraid.

We would put them in a cage only when we wanted the balcony sliding glass panels open...and they just couldn't wait to get out! Alas, after a year, the male flew out of the flat and I had to give the female to a house where they had a lot of them, as I neither wanted to get yet another one, nor keep her alone, and lonely. She kept on, heart-breakingly, cheeping loudly for her companion. I hope she is doing fine now....I never had the heart to go and visit her again.

The great thing about budgies is that they don't yearn for human company the way dogs do...if we are not around, they are content to be with their own kind. One should never have a solitary budgie...they are gregarious birds. How would life be if I could never see another of my species, ever?

tariquesani asked about the "smartness of budgerigars"...this post is the result.