asakiyume left on my LJ. What is hardship?

I have a friend, whose mother was critically ill. When his married sister and little nephew were flying in to visit, they perished when the aircraft crashed. Later, his mother also passed away. A few years later, he found that he couldn't get out of bed one morning...indeed, could never do so again, as he had developed tuberculosis of the spinal cord. From that day to this, he has been wheelchair-bound. But he adapted his home and himself accordingly; there is not a movie theatre or a restaurant he has not visited. He has travelled all over, from African safaris to Norwegian fiords. He built a software company bit by bit; he is now married to a most delightful girl who came to work in his company.

And at one gathering, he was shushed by a lady, who commented unfavourably on the amount of noise he was making with his jokes, to carry on with her account of the hardship she was facing, with maids who would not stick on the job. To her, her own hardship was  more real than anything that she could visualize this young man going through.

(BTW this friend of mine is great at one-liners. At a quiz, someone asked, "Who wrote 'Twinkle, Twinkle, Little Star'?" Pat came his reply: "How we wonder who you are!")

I think hardships are as big as you perceive them to be; sometimes others might agree with this assessment, sometimes not. Comments would range from "She *is* going through a lot" to "what on earth does he have to moan about?", depending the hearer's level of identification with the narrator's woes.

So, better not to judge people and their hardships (as I seem to have done above.). Mostly, people just need a sympathetic ear, it's good to be able to provide that. One should remember that a young  village girl's horror of travelling alone to another place is as real a hardship as getting along without his limb is to an amputee.

I agree with Asakiyume. It is possible to sensitize people to the fact that some hardships are easier to overcome than others. To some people, my lugging up several buckets of water every day would seem a hardship. (Well, in the process, I lost an unborn baby, so I too count it as a hardship...) But some women in my country trek  long distances for this very purpose every day. They would think going down a few stairs for water was a doddle.

Hardship, like much else...is relative. And some relatives can put you to a lot of hardship!


To change the mood: 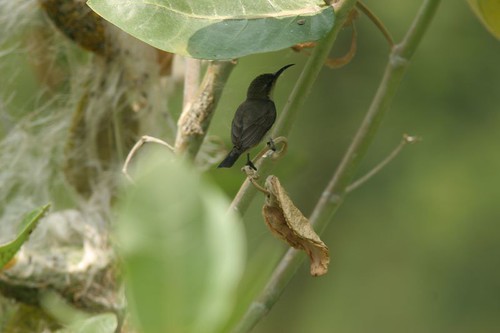 This purple sunbird stayed on the milkweed plant for hardly a second or two; Mohan had to really look nippy with the camera, hence it is not the crispest of pictures. (His camera was in place when the butterfly, which I have posted earlier, happened along.)