This is the text of the field report I filed, for my Naturalists' Training Programme fellow-students:

This morning, Sainath and I decided to meet up at Lalbagh, as I was very keen on seeing the spotted owls that he has been photographing ( see
http://sainath.livejournal.com/66017.html
Indeed, you can enjoy all his snaps on his Live Journal!)

We met up near the Glass House, but then he took me on a route different from the one Bngbirds groups usually take. We slowly trailed along hoping to spot a few birds but didn't see much except the INDIAN KOELS practising their music in several trees; in fact, when Sainath took me to the Cesealpinae (spelling??) tree where he normally see the owls, there was nothing there. However, the beautiful morning, the greenery around us, and the pariah kites enjoying the thermals overhead were satisfying enough for me. We did see two brahminy kites sitting on a tree, looking out over the lake.  Looking at this kept me quite happy..until we went closer to the lake, and took a circuit of it. On a large eucalyptus tree overhanging the lake, we saw three Large Cormorants, with one an immature bird. They were perching and drying out their feathers, and preening too, applying the oily secretions that help them retain body heat when they are in the water. There was also a little egret near the fence, and several little cormorants diving and fishing.
We were stopped by a young boy who wanted to know if we belonged to a birdwatching club; we gave him the details of bngbirds, and told him to come to Lalbagh on 9th July, hopefully to escalate his interest in birdwatching! Sainath generoulsy let him use the binoculars to watch the cormorants up close.
On the way back, we decided to try our luck with the spotted owl again...and we approached the tree quietly....and there the "fellow" was! He was a little furry ball with his back to us, so we circled round to get a view of him from the front. Sure enough, we found a wary spotted owl giving that famous "wise" look, directly at us, as we stopped to admire him through our binoculars! Of course, we could not resist taking another step towards him, and another...and then he decided, enough was enough, and flew off into another tree where he was not so visible!
While circling to see him, though, we saw another amazing sight. On a eucalyptus tree, we saw what we think is a wasps' nest, but of a type that I have never seen before. The nest looked as if made of dried eucalyptus leaves, with swirls of crescent-shaped markings; it was quite low on the tree, between the leaves of some small twigs. We were able to see a lot of insects just inside the mouth, which looked like wasps to us. I am planning to ask Karthik to spare the time to visit this with me and tell me about it, if he can.
On the way out, I spotted a few white-cheeked barbets, too, and I returned home happy at having been able to have quite a productive morning at Lalbagh. Thank you, Sainath, for the owl-sighting!


Neither of us had a camera ( I don't take very good pictures!) so we couldn't document the sightings; next time, one of us will have a camera, definitely!

So, to even things up, here's a picture of a a golden or a black-naped oriole that Mohan took in Corbett ..it could be either, I am not sure(apparently they are found in Bangalore, too!) 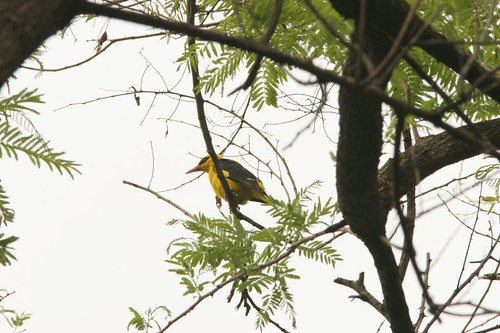