Requiem for an old friend

I got a shock when I went to my friends' page today...there was this young IT guy,

thaths, posting about the death of one MY lifelong friends....Ladies and genmun, here's the dear one who helped my mother, and then me, through years and years and YEARS, to avoid a lot of kitchen drudgery...

The Sumeet Mixie (photo by Deepa Mohan, catch K.Mohan photographing "kitchen machines", which is what this food processor was called.) 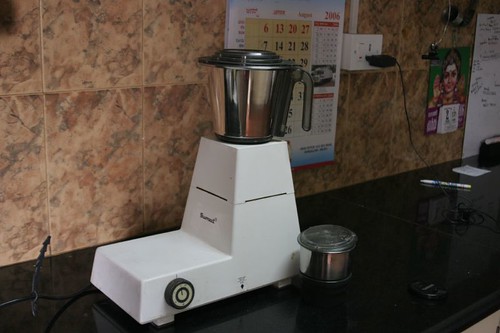 This one in the photograph is over 11 years old, running perfectly, and I have another one, which I got as part of my wedding "stuff", 30 years ago. That, too, is running perfectly... Notice the little jar which takes care of small amounts of spices and stuff to be ground. (like a hostage photograph, you can see today's date on the daily calendar in the background!)

Thaths says that in the old days, there was no choice but the Sumeet and one had to order and wait...I was never aware of this, because the Sumeet was quite simply the BEST food processor for the South Indian kitchen. Where Osterizer or Braun gave up the ghost of their motors when faced with soaked udad daal or parboiled rice, the Sumeet swallowed them all whole (and spat them out as batter) and asked for more. So after my mother had been using one for a few years, I got one, too, when I got married. Over the years, a fuse, and a whipping switch, were added. I never thought of co-ordinating colours...this WAS the mixie I needed, and that *was the colour it was*. (earlier, yellow and red, later, quite a nice white, as you can see.) I loved the design shape, as it sat well on the kitchen counter and I could store the small jar in the groove and the larger jar on the flat part above the button. The main jar came with that most useful thing, a set of detachable blades; so, if I was in a hurry, I could use the jar as a storage vessel (which was initially made of aluminium and later of stainless steel.) It was water-tight and never splattered stuff across the kitchen. The gasket was removable; all parts could be easily cleaned. What more could one ask?

My mother also had a "atta-making" (dough-kneading) attachment too, with was a large bowl which fitted into the flange a  little off-centre and worked beautifully; for some reason, this was discontinued.

I must have ground megakilos of batter for dosais, vadais, avial, koottu, adai, idlis, liquidized  mango and other fruits, even put in "ushili" after steaming, to get a lovely crumbly ushili that my guests exclaimed at; made "quick sandesh" (grind sugar and panneer together in it with a drop of vanilla, and then steam in a greased pan in the cooker), ground spices and dals; even, at a pinch, made cake batter in it....my life as the cook of the family revolved around this god of my kitchen.

I bought one for someone in the US as recently as 2 years ago, as they were made for 110 volts too...I had no idea this dependable genie of the South Indian kitchen was discontinued. On reading Thath's post, I quickly rang up my local appliances dealer...it was true, Sumeet had closed down.

I do have nearby "electrical shops" who will repair my machine for considerable time to come...but I wanted to get my daughter one, too; she would, as Thaths said, been the third generation user. Sad.....

My dear, dependable, reliable, extra-hand-in-the-kitchen Sumeet...even today, I just CANNOT get along without you. What am I ever going to find to replace you, eventually? Sigh. Even the gods are fallible...!It's as if someone told me that the beautiful old Victorian house I have always admired in the bylanes of Richmond Town has ceased to exist (that's been happening SO often!)....well...I have my Sumeet yet, but......life moves on....one more sepia photograph to add to the nostalgia album!

I had started replying on

thaths's LJ, when I realized that my Sumeet required a post on its own! Thank you,

thaths, for pointing out the passing of an era to me!