I went and met Danny Brown in Forest Park, and spent a contented morning. There were no new birds, but I was trying out shots in different light settings.

The early morning sunshine was something I had to get from Danny's running car: 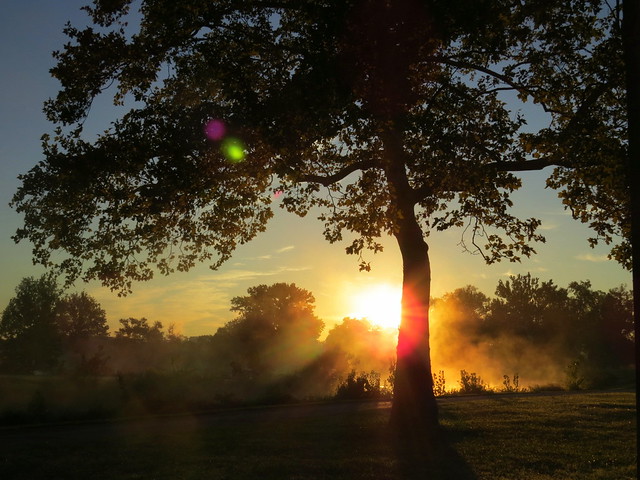 The rising sun on the Cooper's Hawk gave me another opportunity to shoot against the sun: 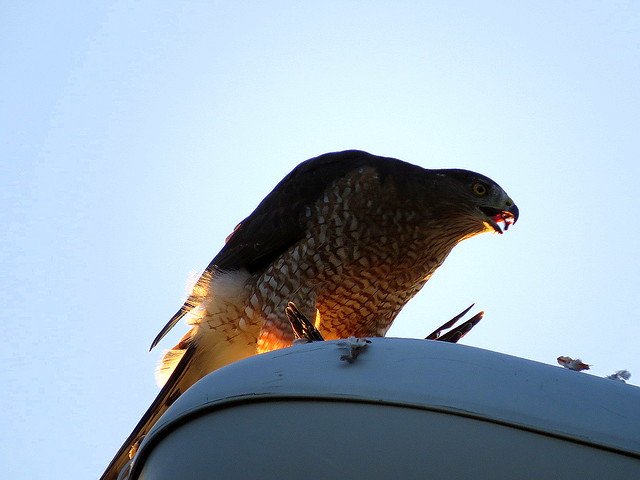 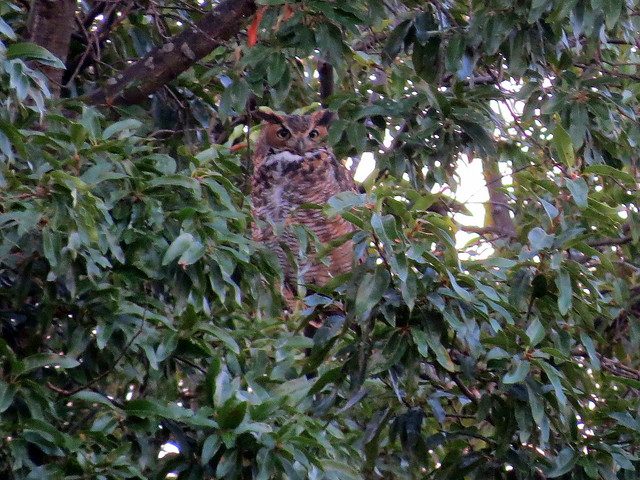 I may not be producing earth-shaking shots, but I'm quite happy with my experiments with light at various times of the day.

DnA suddenly decided that there would be a scientific experiment for the education and edification of KTB, and they chose one that involved baking soda, vinegar, a glass bottle, and a balloon.

D measured out the last of the baking soda: 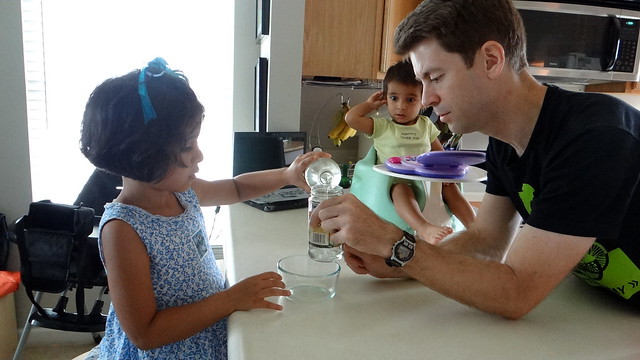 KTB put it in the glass bottle, which held some vinegar: 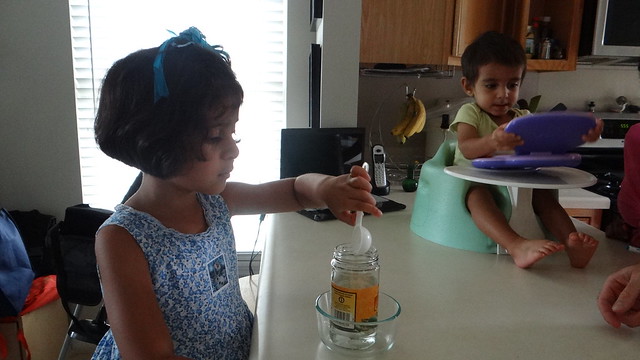 I think The Booda was recording and documenting all this on his laptop, but I am not sure: 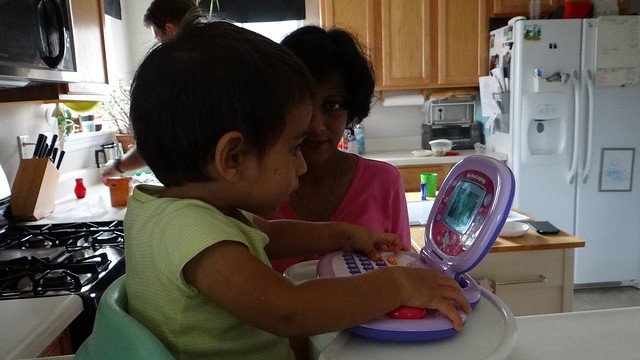 He certainly seemed happy with his efforts, though. 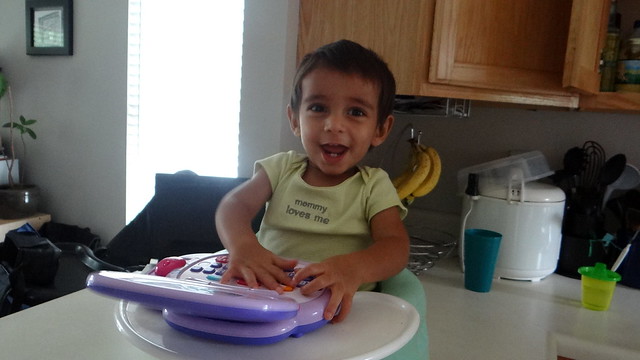 The balloon filled up, satisfyingly but not fully, with carbon di oxide gas:

Now I'd like KTB to realize that all the cooking done in the kitchen, that gets the food on the table, is also a series of chemical reactions, starting from the setting of her favourite "thayir" (yogurt)!

prashanthchengi and I were having a long chat veered to psychic and occult experiments. He expressed the following reservations about seances and such experiments, saying that he'd read a book, which said that "just like precautions ought to be taken before any other kind of experiment, precautions ought to be taken in case of occult experiments too. He completely was against the concept of 'fooling' around with occult, without proper knowledge, especially about the consequences.

"The author mentions that it was quite difficult to establish contact with spirits...because, just like we, by instinct and conditioning fear spirits, spirits too try to usually avoid us. When we make attempts to contact them, it's against the natural order. Some spirits continue to shy away while a few may see it as a valuable opportunity to communicate with the living, just as you think it to be valuable to communicate with the dead. He goes on to say that while some of these spirits may be benevolent, it is quite possible to encounter those which are malevolent too, and one must at least possess enough information in occult to make the distinction between the two.

"He goes on to say that once you delegate even a portion of control over yourself to the spirits (which is done by the medium when he/she is trying to communicate with spirts), he/she is no longer in complete control. A malevolent spirit might refuse to relinquish that control that it wields over you and the attempt at some casual fun with spirits might prove costly. That did spook me, but it did seem make a lot of sense too, at least to me.. Even our Vedas supposedly talk about these rituals.. people who deal with these aspects are those with special training.. those who have studied in depth about actions and reactions.. consequences and ways out of trouble, if and when it arises. A casual (and careless) newbie might in the name of fun just end up getting a dose of something he/she is not even capable of handling. That, I think is scary."


My response was not just to do with occult experimentation, but also about tolerance:


"This is your view of experimentation...and remember, we have no guidelines to go upon. So your view is perfectly valid. When I was studying Philosophy in college, first, Sankhya yoga and then Tantra fascinated me; I did a lot of reading about these practices, and still have an open mind on them.

"But...again, since we have no guidelines to go on....others WILL experiment. It's like..it IS...pure research. You don't know where to go, you don't know how to. You (I mean, the people who carry on psychic experiments) use the seance form because that seems to be a way that's been tried before. We still don't have any properly codified results, and a lot of humbug obscures the scene.

"And without experimentation, without exploration, one does not discover new things. With them, you still might not...but it has to be done! The first person to put to sea must have been in a horribly dangerous position, much as you describe now. The first miners must have been in so much danger (and for all the development of mines, they still are!).. imagine the danger Marie and Pierre Curie must have exposed themselves to.... experimentation, by definition, is risky, and sometimes life-threatening.

"Alas..."fooling around" is the only way humanity often has, of discovering things! :) Do you get my point?

"I once read a lovely passage in P G Wodehouse, which, to me, is the essence of good debate.

"I can see your point of view. But dimly. You see, my own takes up so much of the foreground."

"I will have my ideas, my point of view, but yet, I can see (if not share) another's, and appreciate their validity. That is tolerance and understanding Debate then becomes, not a matter of trying to change each other, one-upmanship, or friction, but a stimulating exchange of ideas that enriches both partners in the dialogue."

Thank you, PC, for making me articulate my thoughts!

I got a call sometime ago from the Bangalore Mirror , a tabloid which the Times of India launched ( One rupee a paper!) asking me if they could use one of my Metroblogs posts...I said yes and said I would also send them articles which were Bangalore-specific. They seem to have taken the yes for a single post as a blanket permission, and apparently, more of my metblogs posts have been used in the paper...oh well, since it's on the public domain, I guess it's OK, but...for a paper to use a not very widely-read blogpost...

Well, anyway, today someone called me and asked me if I could do a review of a play The Flame of the Forest by Gowri Ramnarayanan (the granddaughter of "Kalki" R.Krishnamurthi , who wrote the novel she has adapted ..she writes very well indeed)..it happened that I had just come back from the play, and seven of us were sitting and discussing it right then.

We all had, the previous day, also seen a play about Iranian women who are living in Germany, which none of us liked very much (as one friend said, what deprivation are they talking about if they are living in Germany??)...and I said I would write that review too. Our discussion formed the basis of one review...but when I reached for the brochure which I normally bring back from every play (providing they give one)...it just wasn't there! Then I remembered having given it to one of the friends, and I had to call him up at a not-very-earthly hour to get it out and read it; I was hoping that it would give important information like the names of cast members, set designer, and so forth. No such luck! It was the friend who summoned up the SEG (Search Engine Genie) and got me a lot of info.

Writing a review of a play one doesn't like is much more difficult than of one that's liked. It's quite tough to stand back, look objectively at what it is in a play one doesn't like and articulate it so that it doesn't seem as if prejudice or preconception are driving one's words. And with many experimental plays, there is always this element of emperor's-new-clothism , where people feel they MUST appreciate it as it IS experimental theatre. You see people getting up around you to give a standing ovation, while a big question mark is hovering over your head and YOU feel that the emperor wasn't wearing any clothes, but you don't quite like to say so and bring down the wrath of your appreciative fellow-watchers. I need to understand the symbolisms or the metaphors or the whatever, and am totally mystified if I can't. I think I am symbolically challenged.

I have, I am afraid, been seeing too many of these question-mark (the one that manifests itself over my uncomprehending head) plays lately, about eight of them to every good (imo) play...

And another grouse: when Ranga Shankara committed itself to charging only Rs.49 for plays at its inception (it will be putting on its thousandth performance shortly,on Sept 12), the ticket cost going up to Rs.150 and, day before yesterday, Rs.200, is not something I think of with pleasure. I still cannot understand why Kannada plays should still be the same rate and English plays so much more expensive..what is the logic behind it?

Oh well, I am generally with at least one friend, and whether we agree or disagree about the play, the discussion is interesting..much more so, to me, than discussing the neighbours, their jewellery, or their maids...that WAS a value judgement, I am sorry; but yes, I do find that kind of conversation boring after a short while.

I am also hoping that Bangalore Mirror won't do a Suvarna TV Channel on me...they said they wouldn't pay for stuff they took from Metroblogs, but will pay for stuff I send them directly...and since they asked for the review...I Am Opeful...I am oping to get, at least, bigger peanuts than the Deccan Herald pays!

My sincere sympathies to everyone who tries to make a living out of freelance journalism....what a tough,rocky, impecunious path they tread.
Collapse