This whole post is about the Amtutzes. Uma..thank you for introducing me to Karen, and then the whole family. Prashanth and Deepak also enjoyed their company, and it was a great group to spend the day with....


Here they are, in these two photographs: 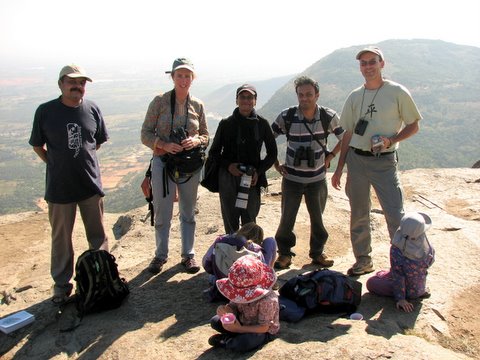 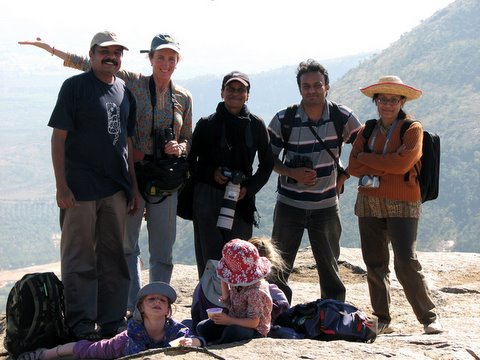 (You can see the three daughters rolling around on the rocks!)

Let me close with this picture of some balloons for sale: 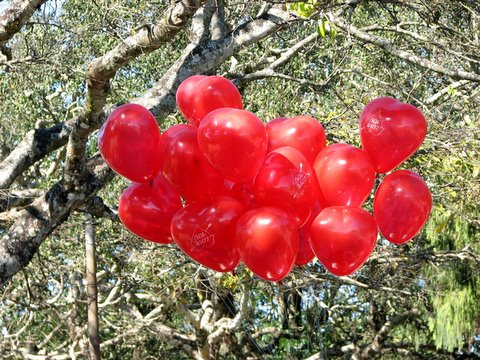 Karen and Paul....like those red balloons, our hearts go with your little daughters!

Anyone who wishes to has a standing invitation from the Amstutzes, to visit Yosemite National Park where Karen is a wildlife warden.

There's going to be another, and more interesting post on the whole outing, and especially about that delightful family, the Amstutzes...but first, I want to put up the bird pictures that I got..

The morning was so excellent in terms of spotting birds...and so terrible in terms of bird photography. On the way, we saw a GREY JUNGLE FOWL, the WHITE-THROATED KINGFISHER, SMALL GREEN BEE-EATERS and the INDIAN ROBIN. On arrival at the orchard area, in quick succession, Prashanth Badrinath pointed out two birds that I had never seen before...the PIED THRUSH (which was a first-timer for him, too, he said. This is a visitor that one can see on its migrant path at this time, or on its way back in March) and the INDIAN BLUE ROBIN. Then we continued to see the TICKELL'S BLUE FLYCATCHER, the TAILOR-BIRD, the ASIAN BROWN FLYCATCHER, and as soon as Dipu K met us (he was on his way home) he pointed out the RED-THROATED FLYCATCHER. We also saw the ORIENTAL WHITE-EYE, the GOLDEN ORIOLE, the BLACKBIRD, the RED-WHISKERED BULBUL, the BLUE-CAPPED ROCK THRUSH, the GREENISH LEAF WARBLER, the BLYTHE'S REED WARBLER, the BOOTED WARBLER, the SPOTTED BABBLER (forgive me for an interruption at this point. To me, all these warblers-- especially spotted for fractions of seconds-- look quite, quite alike. But Prashanth talks about wing-feathers and bars on the tails and coverts and supercilium and things like that, and tells each and every bird--and its brother and sister-- apart. Me, I will say "warbler", and let it go at that. Dr. Kumar Ghorpade would probably murder me within five minutes of my meeting him.)

Up in the air, we saw ALPINE SWIFTS, BARN SWALLOWS, RED-RUMPED SWALLOWS, DUSKY CRAG MARTINS, the BOOTED EAGLE, a JUVENILE EGYPTIAN VULTURE, a KESTREL...we especially saw the kestrel swooping along with a lizard in its claws, and do you think we got a good shot? What do you think? Yes, indeed I got a nice brown glob on my camera....

As we finally went towards a welcome lunch, we saw a NILGIRI WOOD PIGEON shoot across the road, and we finally got a good view of the bird...and a male Asian Paradise Flycatcher tantalized us so much that we were quite a good hour late for lunch!

I was quite disheartened about the photography part, though I was thrilled with all the sightings. I thought that I would probably go home without any good photographs ( which would NOT a first-timer for me by any means!!) but then Fate took pity on all of us....

So here they are: 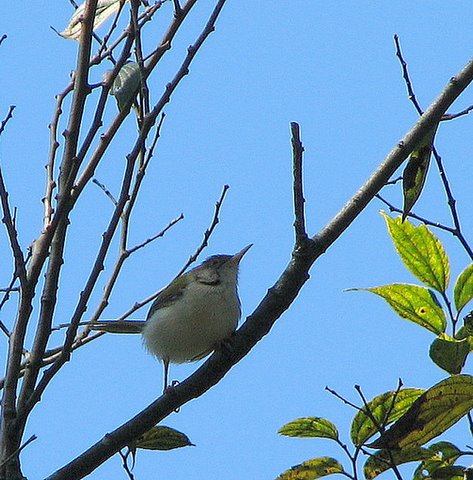 A lovely pic of a TAWNY-BELLIED BABBLER (thanks, Uma and Yathin, in alphabetical order!) with food, taken by Uma to try out the 20D.... 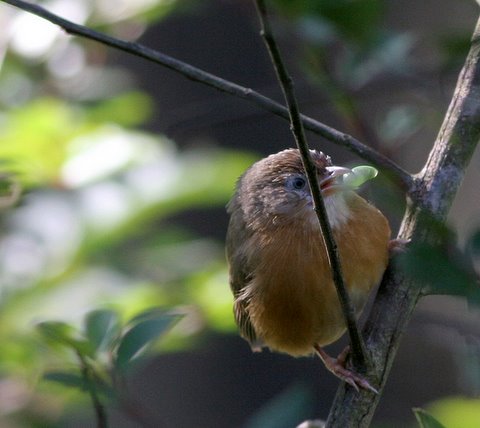 Here's the kestrel in flight. I asked why the bird could not face me, and Prashanth said if I could wait for six months, the direction of the wind would change and I would get the shot I wanted....! 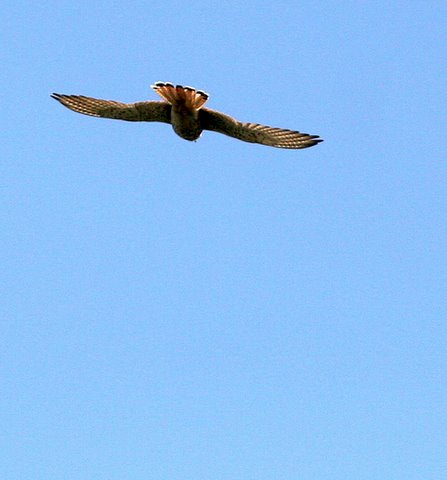 And then, of course, when the light conditions were none too good, both the female Asian Paradise Flycatcher 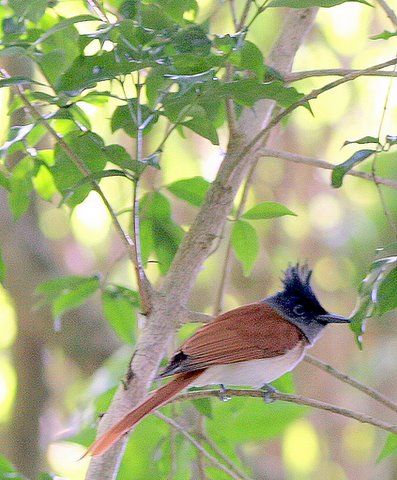 decided that they had teased us enough, and showed themselves long enough for us at least to aim our cameras, if not get great shots!

The next post will talk about the sweetness of the Amstutz girls, who troubled us not a whit, the parents, who have done such a great job with their daughters, and the various other things that we saw, and enjoyed....

But this is the birding post and I am sure I have left out several birds that I will add after I get Prashanth Badarinath's list!
Collapse