I have a sort of maternal interest in that misbegotten child of the Bangalore Mahanagara Palike, the Jayadeva flyover. I want to point out here, another instance of bad design. You would think that when they design a flyover on a busy arterial road (it's also a highway), they would make allowances for bus stops...ha, ha, ha.

At the entrance to the underpass of the flyover from the J P Nagar side. Buses stop just past the divider, on the ramp to the underpass, blocking all traffic behind. People have to get off, and then cross two more lanes of traffic (pedestrian crossing? what's that?) to get to the pavement (sidewalk)... a procedure that puts them in danger from the traffic coming up from behind. 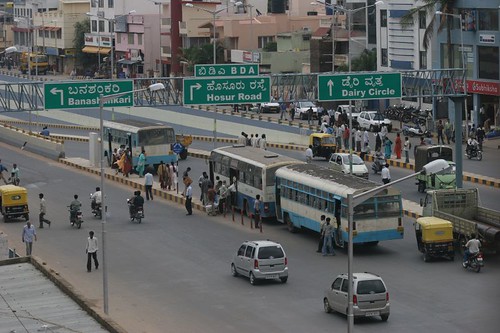 And as for the passengers waiting on the other side of the road, they have to cross one lane, and stand precariously on the little divider, looking into the underpass, waiting for the buses.... 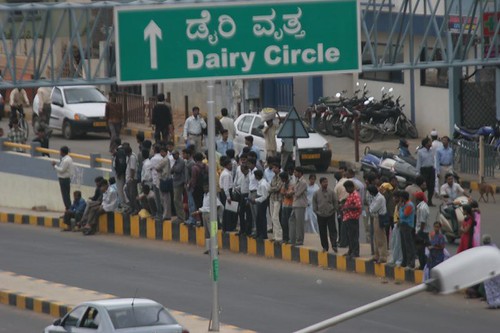 The crowd, at peak times, is much larger than this, surely a danger to the bus commuters as well as the traffic.

And the buses stop ...just at the exit from the underpass, with a slope upwards, where there will be a maximum blockage of other traffic coming up from the underpass....often there are two buses, stopped one behind the other. 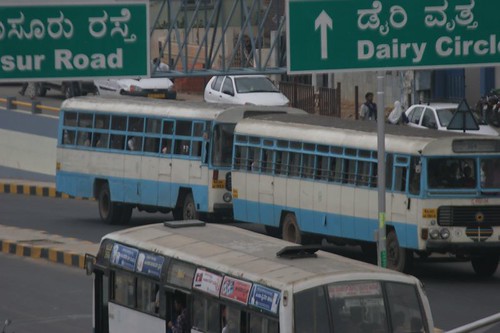 I read that two more such delightfully designed flyovers are going to be built in Bangalore. Good, I know some politician's wife is already dreaming of her next lot of diamonds....how many politicians did I read, went on a junket to Singapore in 1992 and 1993 to see the transport system? How many are right now proposing one more such junket?

I rarely write about politics. But politicians, especially belonging to Namma Bengaluru, are the pits. I am worried about when the Jayadeva flyover will claim its first traffic victim....all because of rotten, shoddy, unimaginative, people-unfriendly design.
Collapse